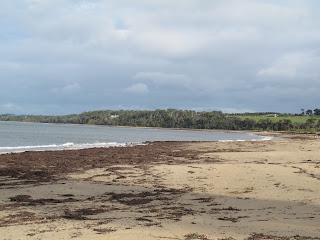 Just a quiet beach here. I am thinking of many things--the words from my dear "Le avventure di
Pinocchio" by Collodi: "Ma il burattino era fatto di legno moto duro." But the little puppet was made of very hard wood, and so the assassin's knife could not penetrate his body. I think of the people of all the Souths in the world who so often live at the mercy of their Norths, but who grow surface- hard wresting lives from stony places, while their yearning hearts turn even stone to green. My Pinnochio is an anti-Disney fable of the spirit of peoples, who often go astray to taste life but dream of saying thank you to all that gave them life. A simple piece of wood already alive with the aspirations of a people.

I think of what I have seen in the released prisoners in both Gaza and Israel--the lost years of life for one young man, raised to be a soldier, the decades lost in the lives of so many others, and the remaining thousands in Israeli jails whose crime sometimes is no more then being a member of an elected political party, 20 years, 30 years, deaths and births gone unmarked, the anonymous prisoners whose names we do not know while the streets of Tel Aviv are filled with cafe goers and all the cosmopolitan chatter of a MMediterranean city's life. Like the old French novels told us, look below the cities of the world and see who languishes in imposed darkness and then speak, if you dare. of healthy democracies. In all the celebrations of the prisoners released into their new times, no one speaks of the hell of nations ruled by the gun, of the brutal expectations on both sides of what it takes to be a man--a man of the nation. Masculinity lost before it can find itself, the softnesses, the loves, the joys, the differences from national norms, all swept away by the hollow steel of arms, not meant to hold, but to kill. The sorrow of it all amid the banners emblazoned with emblems that demand their deaths in so many ways, and in turn, ours as well.

We wake to the shouts of joy, another tyrant pulled from his hole and smashed to death. Is this the means to another kind of state? Death for deaths.

I look out my window and see Andres walking by with his young son in his arms, Julian, nestled into his shoulder. Every morning the young father and his son tend to the three chooks that live in their front yard, the three year old watching his father clean and water and feed the three Queens, making sure they have all they need before he goes to work. Perhaps all of us are resting on that shoulder on another kind of street.
Posted by Joan Nestle at 3:55 PM