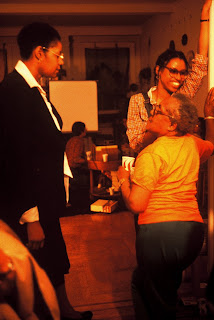 In our history of Ms. Hampton, we are now entering the so-called conforming 1950s, when white, middle-class heterosexual women, we have been told, are running in droves to be married and keep the perfect home. Reflecting another vision, Ms. Hampton carefully cuts out and saves newspaper articles on the pioneer transsexual Christine Jorgensen. From 1948 until her retirement in 1972, Ms. Hampton will work in the Housekeeping Division of Jacobi Hospital, where she earns for herself the nickname "Captain" from some of the women she works with, who keep in touch with Ms. Hampton until their deaths many years later. Here she meets Ms. Jorgensen and pays nightly visits to her hospital room.


From Ms. Hampton's saved documents: Daily News Article, December 1, 1952:  "Ex-GI Becomes Blond Beauty," contains a letter written by Jorgensen explaining to her parents why there is so much consternation about her case. She concludes, "It is more a problem of social taboos and the desire not to speak of the subject because it deals with the great hush, hush, namely sex." 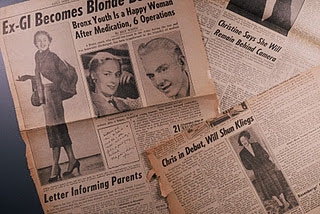 Ms. Hampton begins the decade earning $1, 006 for a year's work and ends it earning $1,232. Because of lack of money, Ms. Hampton was never able to travel to all the places in the world that fascinated her, but in this decade she adds hundreds of pages of stamps to her overflowing albums, little squares of color from Morocco and Zanzibar, from the Philippines to Mexico. 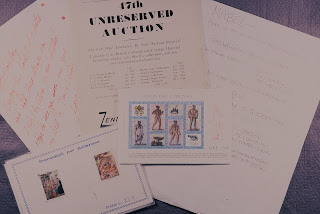 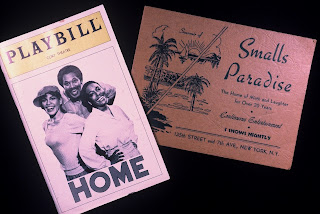 Throughout her remaining years, Ms. Hampton will continue with her eyes on the hilltop and her feet on a very earthly pavement. She will always have very little money and will always be generous. In the 1970s, Ms. Hampton discovers senior citizen centers and "has a ball," as she liked to say, on their subsidized trips to Atlantic City.[Throughout her later years, Ms. Hampton stayed at #13A and delighted in disappearing for days at a time on jaunts to this New Jersey casino- world on the sea.] 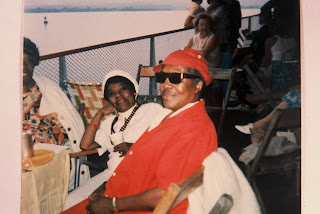 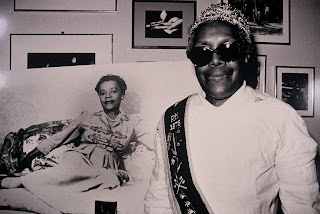 Ms. Hampton in her Eastern Star dress with LHA's image of Ms. Lillian Foster in the background, c. 1980
While Ms. Hampton and Ms. Foster had been living with us at 215, Ms. Foster had showed the first signs of heart failure, that sadly claimed her life in 1978. 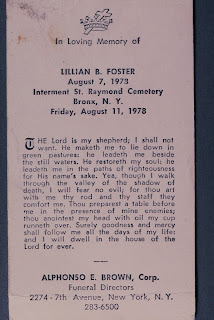 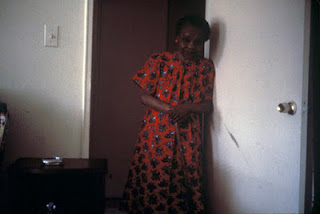 Lillian Foster in her Bronx home, 1977
After almost drifting away in mourning, Ms. Hampton found new energy and a loving family in New York's lesbian and gay communities. She will have friendly visitors from SAGE and devoted friends like Ann Allen Shockley, who never fails to visit Ms. Hampton when she is in town. 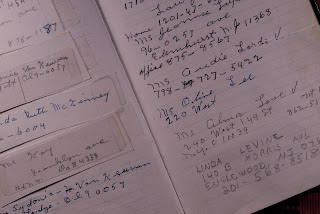 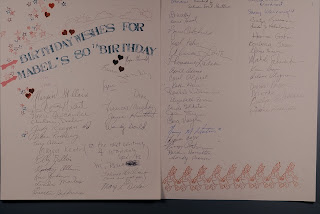 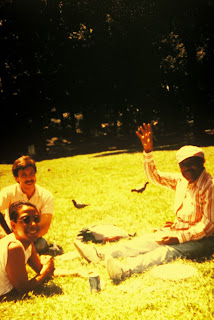 Ms Hampton with SAGE friends, 1984
Ms. Hampton will march in Washington in the first National lesbian and gay civil rights march. She will appear in films like Silent Pioneers and ﻿ Before Stonewall.  Through the mid-80s, Ms. Hampton attended several all women festivals and camps, such as Sisterspace, loving the women's bodies all around her and met with many members of lesbian and gay organizations and marches in the yearly NYC gay pride demonstration. In 1987, she accompanies  Deborah Edel and her partner, Teddy Minucci, to California, her first airplane trip, so she can be honored at the West Coast Old Lesbians Conference. 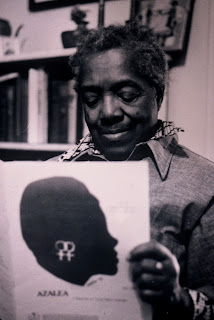 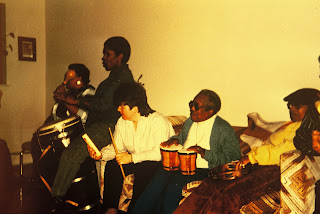 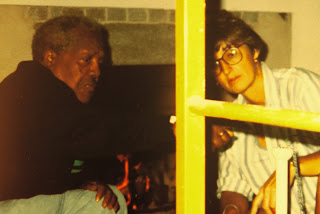 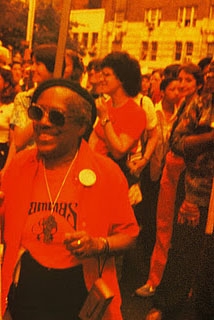 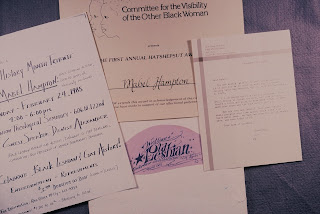 She will eventually have to give up her fourth-floor walk up Bronx apartment and move in with Lee Hudson and myself, who along with many others will care for her as she loses physical strength. 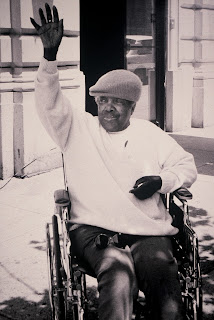 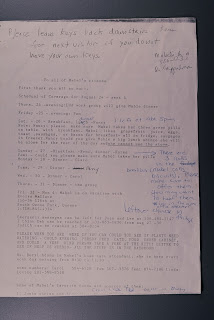 The directions of care for volunteers who shared Ms. Hampton's care in her last days, 1989
On October 26, 1989, after a second stroke, Ms. Hampton will finally let go of a life she loved so dearly.
Ms. Hampton never relented in her struggle to live a fully integrated life, a life marked by the integrity of her self-authorship. "If I give you my word, she always said, "I'll be there," and she was. 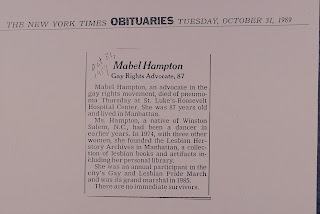 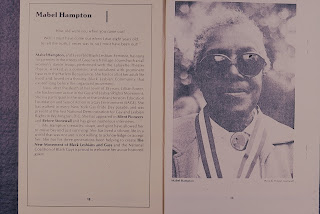 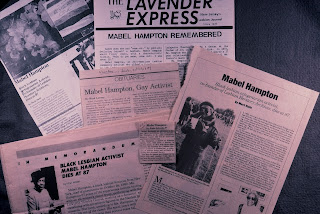 On her death, her sisters in Electa Chapter 10 of the Eastern Star Organization honored her with the following words: We wish to express our gratitude for having known Sister Hampton all these years. She became a member many years ago and went from the bottom to the top of the ladder. She has served us in many capacities. We loved her dearly. May she rest with the angels." 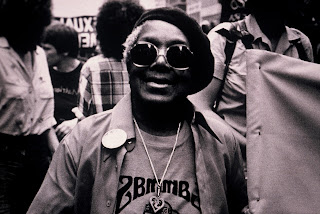 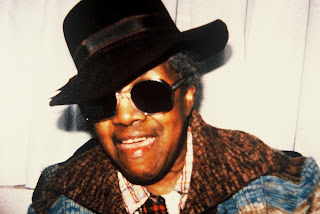 c. 1980
Class and race are not synonymous with problems, with deprivation. They can be sources of great joy and communal strength. Class and race, in this society, however, are manipulated markers of privilege and power. Ms. Hampton had a vision of what life should be; it was a grand, generous vision, filled with good friends and good food, a warm home, her Saturday afternoon opera broadcast from the Metropolitan, and Lillian by her side. She gave all she could to doing the best she could. The sorrow is in the fact that she and so many others have had to work so hard for such basic human territory.

"I wish you knew what it's like to be me" is the challenge posed by a society divided by race and class. We have so much to learn about one another's victories, the sweetnesses as well as the losses. By expanding our models for what makes a life lesbian or what is a lesbian moment in history, we will become clearer about contemporary political and social coalitions that must be forged to ensure all our liberations. 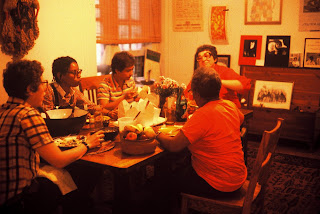 A communal dinner at #13A with Deborah Edel, Ms. Hampton, Arisa Reed, Batya, and Mary, c. 1980
We are just beginning to understand how social constructs shape lesbian and gay lives. We will have to change our questions and our language of inquiry to take our knowledge deeper. Class and race, always said together as if they meant the same thing, may each call forth their own story. The insights we gain will anchor our other discussions in the realities of individual lives, reminding us that bread and roses, material survival and cultural identity, are the starting points of so many of our histories. 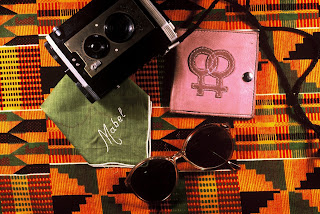 In that spirit, I will always remember our Friday night dinners at the archives in #13A, sometimes with a life size portrait of Gertrude Stein propped up at one end of the table; Ms. Hampton sitting across from Lee Hudson, my partner then, a midwesterner; Denver, the family dog, right at Ms. Hampton's elbow, and myself, looking past the candelight to my two dear friends, Lee and Mabel--all of us carrying different histories, joined by our love and need of each other and of a more just world. 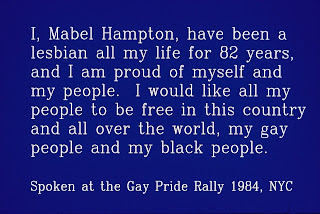 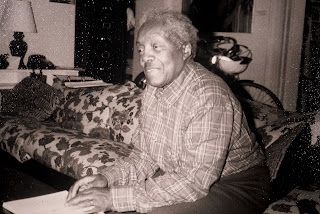 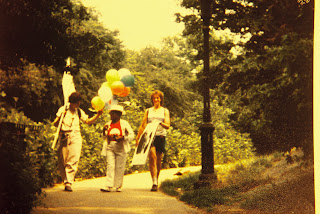 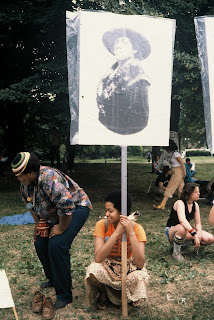 Ms Hampton in the hands and hearts of new generations
Posted by Joan Nestle at 10:25 PM