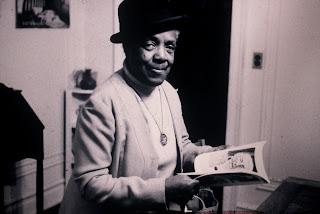 Ms. Hampton at #13, c. 1970s
But before all this exploration takes place, Ms. Hampton will be arrested for prostitution by two white policemen and be sentenced to three years in Bedford Hills Reformatory for Women by a Judge Norris. Ms. Hampton: "While we're standing there talking, the door opens. Now I know I had shut it. and the two white men walk in--great big white men. 'We're raiding this house,' one of them says. 'For what?'
'Prostitution,' he says. I hadn't been with a man no time. I couldn't figure it out. I didn't have time to get clothes or nothing. The judge she sat up there and says, 'Well, only thing I can say is Bedford.' No lawyer, no nothing. She railroaded me.
When Ms Hampton talks about her prison experiences, she dwells on the kindnesses she found there: "It was summertime and we went back out there and sat down. She [another prisoner] says, 'I like you.'
'I like you too.' She said no more until time to go to bed. We went to bed and she took me in her bed and held me in her arms and I went to sleep. She put her arms around me like Ellen used to do, you know, and I went to sleep. 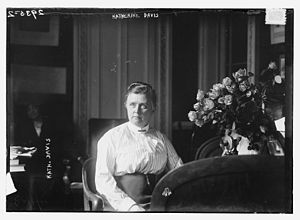 Ms.Katherine Davis, 1920
But where Ms. Hampton found friendship, the  Board of Managers of the prison found scandal and disgrace. Opened in 1902 in a progressive era of prison reform, Bedford Hills under its first woman administrator, Katherine Davis, accepted the special friendships of its women inmates, but in 1920, word that interracial lesbian sex was occurring throughout the prison caused Ms, Davis to lose her job. The new administrators demanded segregated facilities, the only way according to one of the men, to prevent interracial sex.
By the time I was doing this oral history with Ms. Hampton, she had left this experience far behind. She told me that she seldom told anyone about it; she would just say she had gone away for awhile. But toward the end of her life, Ms. Hampton wanted her whole story to be told. She realized that her desire to be open about her life was not always popular with her peers. "So many of my friends got religion now," she would say, "you can't get anything out of them."
While Mabel Hampton so generously shared her prison experience with me, I read about Bedford Hills in Estelle Friedman's book, "Their sister's Keepers: Women's Prison Reform in America, 1830-1930. When I read the following sentence in Freedman's book, "By 1919, we are told, about 75% of the prisoners were prostitutes, 70% had venereal disease, a majority were of low mental ability and ten percent were psychopaths," I was forced to see the lesbians encoded in this list. Mabel Hampton was among those counted women. As gays, as lesbians, we have a special insight [or should], a special charge in doing history work. We, too, have had our humanity hidden in such lists of undesirables. I started this work on Ms. Hampton because her life brought to the study of history the dignity of the human face behind the sweeping summaries. And because I loved her.
After 13 months, Ms. Hampton is released from the Reformatory with the condition that she stay away from New York City and its bad influences, but Ms, Hampton cannot contain herself. A white woman with a gray car whom she met in Bedford comes to Jersey City to take her to parties in New York. When a neighbor informs on her, she is forced to return and complete her sentence at Bedford. Ms. Hampton later describes some of the life that the state had declared criminal.
"In 1923, I am about twenty years old. I had rooms at 120 West 122nd Street. A girlfriend of mine was living next door and they got me three rooms there on the ground floor--a bedroom, a living room and big kitchen. I stayed there until I met Lillian in 1932. I went away with the people I worked for, but I always kept my rooms to come back to. Then I went into the show.
"Next door these girls were all lesbians, they had four rooms in the basement and they gave parties all the time. We'd buy all the food--chicken and potato salads. I'd chip in with them because I could bring my girlfriends. We also went to 'rent parties' where you go in and pay a couple of dollars. you buy your drinks and meet other women and dance and have fun, but with our house, we just had close friends. Sometimes there would be twelve or fourteen people there. We'd have pig feet, chittlins. In the wintertime, it was black-eyed peas and all that stuff. Most of the women wore suits. Very seldom did any of them have slacks or anything like that because they had to come through the streets. Of course, if they were in a car, they wore the slacks. Most of them had short hair. And most of them was good-lookin' women too. The bulldykers would come and bring their women with them. And you wasn't supposed to jive with them, you know. They danced up a breeze. They did the Charleston, they did a little bit of every thing. They were all colored women. Sometimes we ran into someone who had a white woman with them. but me, I'd venture out with any of them. I just had a ball." 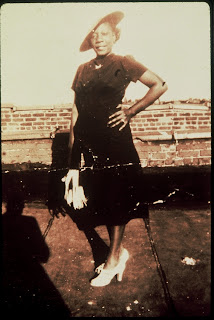 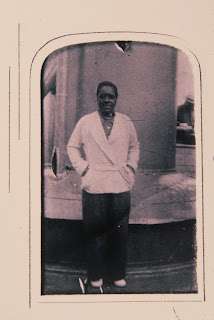 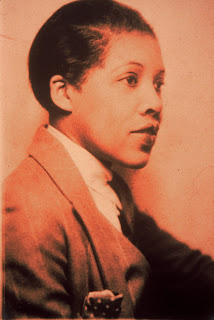 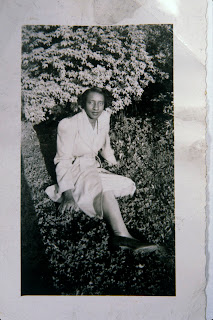 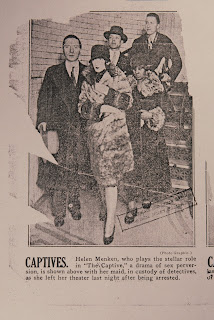 News article of the arrest of Helen Menken on obscenity charges for starring in the play "The Captive," NYC, 1927
﻿"I had a couple of white girlfriends down in the village. We got along fine. At that time I was acting in the Cherry Lane Theater. I didn't have to go to the bars because I would go to women's house. Like Jackie (Moms) Mabley would have a big party and all the girls from the show would go. She had all the women there."
In addition to private parties, Ms. Hampton and her friends were up on the latest public lesbian events. Sometime in February of 1927, Ms. Hampton attended the new play that was scandalizing Broadway, The Captive.  Whatever her material struggle was in any given decade, Ms. Hampton sought out the cultural images she needed. Here is how she remembered that night in the theater.
"Well, I heard about it and a girlfriend of mine had taken me to see this play, The Captive, and I fell in love--not only with the The Captive but the lady who was the head actress in it. Her name was Helen Mencken. So I decided I would go back--I had heard so much talk about it. I went back to see it by myself. I sat on the edge of my seat! I looked at the first part and I will always think that woman was a lesbian. She played the part too perfect! She had the thing down! She kissed too perfect, she had everything down pat. So that's why I kept going back to see it because it looked like to me it was part of my life. I was a young woman, but I said now this is what I would like to be, but of course, I would have to marry and I didn't want to marry [the play focuses on the seduction of a married woman by the offstage lesbian, who is also married], so I would just go on and do whatever I thought was right to do. I talked to a couple of my friends in Jersey City about the play. I carried them back, paid their way to see it, and they fell in love with it. There was plenty of women in that audience and plenty of men too! [here Ms. Hampton means same-sex couples] They applauded and applauded. This same girl with he green car, she knew her--Helen Mencken--and she carried me backstage and introduced me. Boy, I felt so proud! And she says, 'Why do you like the show?' I said, Because it seems a part of my life and what I am and what I hope to be.' she says, 'That's nice. Stick to it! You'll be alright.'" 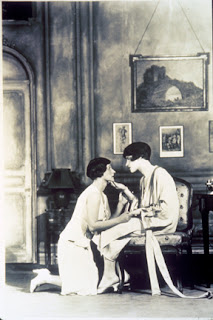