Times are tense now on the streets of Belgrade as the chosen time for the Gay Pride march grows near. Armed conflict at the Kosovo-Serbian border has inflamed nationalist angers; Lepa as always tells me of the messages that fly across the country: September 28, 2011: "From the Independent Police Syndicate/Trade Union: We invite members of the Organization Committee of Belgrade Pride to postpone this year's demonstration because certain groups are preparing not only attacks, but as well are promising a demolishing demonstration under the title, 'Belgrade on Fire.' According to our knowledge, hooligans are planning--in all suburban communities in Belgrade as well as in bigger towns in Serbia--to destroy and burn on Pride Day." Panic production, Lepa calls this warning. She writes later in the day, " I have received a letter from T. this morning about several small attacks on lesbians and  gays in Vojvodina. It is obvious that these kind of statements like the one from the Police Trade Union has given the green light to gangs of young men to walk around town and threaten different looking people in the search for excitement, especially in the evening and night. The fear is obviously present."

I think of the women we have met, of their work in the region, in small and larger towns, and my worry grows.

On September 29th, 8: 36 AM, Lepa writes, "The fear has been extended in the lesbian and gay community, I can't tell you how much... I am observing, threatening will have its effects because the police do not have political backing, not one political party has openly supported the police! so why should they send 5000 policemen to be hit and and beaten by ultra-nationalists men to protect the lesbians and gays who are the ones supposed to be beaten, if they don't get anything in return? no extra salary, no political points. So we are talking today and we expect more and more the police will say no. We shall see. And second is this issue of Kosovo and they see it as a shame to involve the State and the police in Faggots' issues while Serbia is already burning on the border of Kosovo! Ok. Enough."

On the same day, 9:59 AM, Lepa writes, "More attacks in Novi Sad, T. is non stop active there. Lesbians from Novi Sad decide not to come to Belgrade Pride. All night they met to discuss this. Too much pain. We need to see what we can do. One ultra fascist  organization had announced at a press conference last month, that they would actively work to stop the realization of Gay Pride Belgrade 2011. They are active nonstop.I think they are behind the police statement. Every day the town sees new fascist posters that we take down during the rest of the day..." 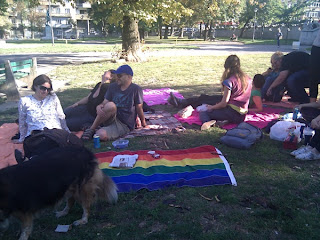 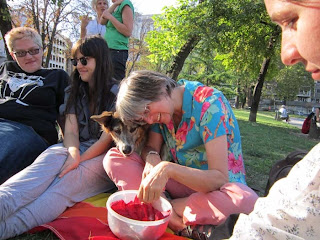 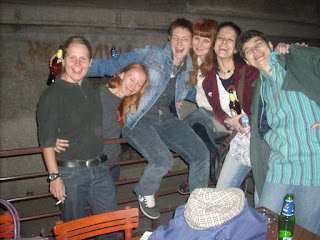 On October 1, Lepa writes me that that State has banned Gay Pride Belgrade 2011. The community feels a mixture of relief, anger, sadness and resolve. Already endless meetings, plans for actions are taking place in Belgrade. This is how I want to end this entry, with the images of hope and refusal to hide, with an image of lesbians from the region picnicking in the park, sitting on the rainbow flag that offers its defiant messages and the parting image from La Professoressa's and my last night in Belgrade, where young lesbians laughed and celebrated their freedom in the night air. That bar, so wonderfully perched on a street corner near where Lepa lived, is gone now--the economics were too hard--but this is the wonder of it all, the persistence of community, in the face of national hatreds.

What is happening here is of the greatest importance, it seems to me, for it is here that ultra nationalism and homophobia are emblazoned on the walls, it is here, at these contested national spaces where the threat of violence is so real, that gay liberation takes on its deepest meanings in our times. It is here where the State and the Queer Body stand in the clearest opposition--not the here of Serbia only, but the here of so many countries where we are marked as bringers of shame to the national narrative of power and cultural purity. I think in America where the problem is different. There wealthy gay men rush into the arms of the Republican State to pay them back for support of gay marriage, for unquestioning support of the nationalism of Israel, where we thank the State for letting us be once again good soldiers, this time without secrets, this time openly queer participants in the mass murders known as War. The State and the Queer Body, the Border and the Queer Body, the Policing of Others and the Queer Body, Nationalisms and the Queer Body. Oh my young thinkers, you have much to ponder, while the people are in the streets.
Posted by Joan Nestle at 12:01 AM