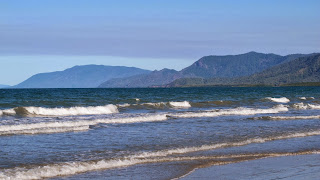 The sea, all around is the sea, the sea that whether here or washing up on the shores of Lampedusa, more and more is becoming the site of perished hope, the sea where the inequities of our world are carried on every ceaseless wave. The sea meeting lands where war and exploitation have made life impossible, where the North refuses the South, where power, like the sea, relentlessly pushes its own protection and the unwanted bodies slip under the surface, once again.
Posted by Joan Nestle at 2:18 PM No comments: 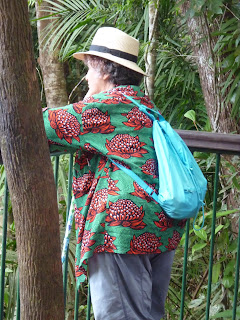 Here I am in Queensland, wearing warratahs, an ancient Australian flower. My Australian body, so different from my Broadway, New York body but traffic and water flows, street cries and parrot songs all merge into the stretch of life. 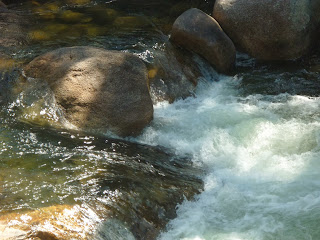 Posted by Joan Nestle at 4:37 AM No comments:

Belarus Free Theater: Minsk, 2011: A Reply to Kathy Acker on a Cold Spring Night in Melbourne

Without arts' festivals, it would be hard to coax many Western artists and companies to make the long trek to Australia, but as I saw when the National Art Gallery brought a smattering of Impressionist masterpieces to these shores, people came from the bush and the small towns to stand ten deep in front of the starry nights of Van Gogh--I, originally from the overly art rich world of New York City--watched bus-trip  weary Australians trying to get a glimpse of living lines of color and madness, and thought the margins are still where things can be seen as never seen before. Isolation is a place of yearning and of gratitude.

"The company was formed in Europe's last surviving dictatorship, and every member of Belarus Free Theater has, at one time or another, been imprisoned, threatened or mistreated by the authorities..."

For the past two weeks, the Melbourne Festival has been in full swing, but one offering particularly caught my eye because it had the word Minsk in it. Now growing up in the Bronx in the 1940s, in a family with Polish and Russian roots, Minsk seemed always to be in the air, like Lodz. Words that had no real outline but carried weight, words that marked roads that led nowhere or that held parcels of meaning never opened or the shifting ground of Jewish peasants, one day Polish, the next Russian, always unwanted. Minsk, I said to myself. Darling, I said out loud, we are going to see this performance.A small window opened on my Bronx past here, in the land of desert and vast sea and embattled heritages and I wanted to peer though it, to see what Minsk stood for now in 2013.

"Minsk is the capital city of Belarus, a country situated between Poland and Russia, where the same President has ruled for almost 20 years. It is a place where the authoritarian regime has taken to enforcing control over people's very identities, including their sexuality. The most recent Gay Pride march in Belarus was broken up by police after only 15 minutes. All the gay clubs in Minsk have now been closed down."


So there we were,  La Professoressa with her glass of red wine and me pacing the carpeted halls of the Arts Center, knowing I had to be there. And sure enough, I see Dennis Altman, the gay historian, also Jewish and we hug and say, we had to be here and then I see Arnold Zabel, the caretaker of Yiddish culture in Melbourne and refugee rights activist, he too in pursuit of Minsk. So Jews floating in their own memories of memories of Minsk take their seats along with so many more, not a seat left and the new refugees from Minsk give us their hearts and bodies, scarred and brave, words breaking through enforced silences; they give us the once again the power of a people's theater, stripped down to naked confrontations with the State and their own yearnings, their own displacements, bits of white paper become the snow of Eastern Europe, and I sit in the darkness, thinking of how quiet the streets of New York become during a thick snowfall, how good the cold snow star feels on the cheek as long as refuge is close by. Not a Jew in sight in this Minsk, but the connections are there, for this queer one. I thank the Belarus Free Theater for coming so far from their river, from their country without access to the sea, locked in in so many other ways, to this island continent where sea is our master and the home of our own cruelties. I thank you for the history you invoked and for the history you taught, for your bodies bearing the bruises of exile, even and more then ever, when you were home in Minsk.

And in memory of Kathy Acker whom I met when we formed the Feminist Anti-Censorship Task Force (F.A.C.T) in New York City in the late 1970s. I can see that room with its neat rows of wooden folding chairs, with Kathy and Ellen Willis and Ann Snitow and many others, feminists all and sex radicals all.

Posted by Joan Nestle at 9:27 PM No comments:

The Sweetness, the Sorrow 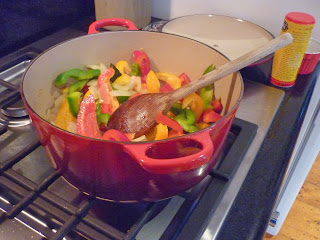 I am cooking for a gathering of Jewish lesbian friends, a time of sweetness; the cookbook, Jerusalem, compiled by the Palestinian author-chef, Sami Tamimi and the Israeli author-chef Yotam Ottolenghi has been my bible for the past few days as I measure out my sumac and whole coriander seed. On the pages of this book two cultures live in vibrant colors of streets and shared ingredients, any moment of mutual appreciation so valued and then I turn the page and read:
Za'atar [a spice mix consisting of powdered dried hyssop leaves, ground sumac, toasted sesame seeds and salt, part and parcel of the Palestinian heritage] has now also become central to modern Israeli cuisine. Regrettably, za'atar has joined the long list of thorny subjects poisoning the fraught relationship between Arabs and Jews, when the Israeli authorities declared the herb an endangered species and banned picking of it in the wild. Though a compelling argument was made about preserving the dwindling population of wild za'atar, the decree was taken without any form of dialogue with the Arabs, who see it as a deliberate violation of their way of life.

Not even this pleasure, this memory of spice in the mouth, can be allowed. From the smallest seed to the huge gray wall, the Israeli State crushes Palestinian possibilities for pleasure. I stir my pot with sadness at this huge petty insult to human life.
Posted by Joan Nestle at 8:17 PM No comments:

My Sweetness, My Sorrow 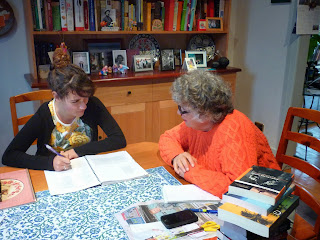 My Sweetness: Ruby and I during our weekly mentoring session--and I have to say the mentoring goes both ways--Ms Ruby, 16 now, and I sharing thoughts about the imagist poetry of H.D. and the Circe tale as Homer tells it. I have been struggling to find my way back to this site, to force my words again into this mix of private public touch. Not because there is nothing to mourn for or rage about or to remain obdurate in our demand to take note and find actions of resistance, but because there is so much. I am thinking now of the three young Russian women of Pussy Riot who have been imprisoned on the outer limits of their Russian geography, how much the Putinites would like us to forget them, Maria Alyokhina, Nadezhda Tolokonnikova, Yekaterina Samutserich, and how we will not forget them, even as they are disappeared into the incarceration black hole of the Russian prison system. The lightness of their touch, their thin disruptive bodies now exiled from our ken but oh how foolish, how brutal Putin looks as he struts his masculinity over their youthful bodies. Somewhere over the steppes a strum is carried on the winds, young women's voices, fresh and brave, mocking the hollow iron man.
Posted by Joan Nestle at 7:54 PM No comments: