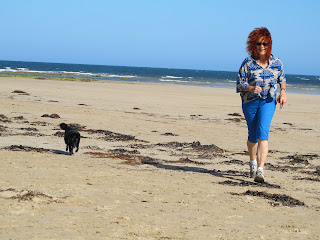 Once again we are readying for flight. La Professoressa has decided the only way she can cope with turning 60 is for us to spend sometime in Beijing. I know today is the day we leave because Cello is not following me nose to heel with that anxious look in his eye. Last night we took a green bag filled with his bowl, his torn-eared woolly mammoth, enough food for six months just in case and his bed over to Spottswood by the bay, to the the wonderful home of Jane and Ann, whose skippergees, Dot and Isabella, Cello grew up with. We will just be away for 12 days but always when I call on my body to make one more voyage, I feel as if all could happen. This will be my first time in China and again, the sense that just for a moment, at 72 almost, I will be standing at future's portal, in a land where struggles abound, another history with a feather's touch upon my own. All because of La Professoressa who never tires of her travels and who makes me say yes even when so much seems hard. To all who from time to time look upon these words and to my old dear friends, I say good-bye until, once again, the morning sun rises over Melbourne.
Posted by Joan Nestle at 8:33 PM 1 comment:

Those Who Tell Us, Those Who Show Us 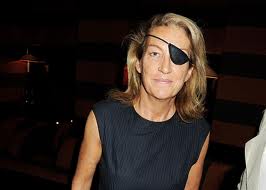 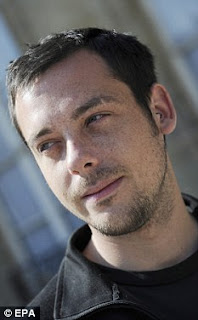 Remi Ochlik
The fallen, who with words and pictures, made us see if we would look, the sufferings of a people. How the Right goes on about "the media," that tool of the elite. A favorite target these days. Look at these faces. So many journalists have given their lives around the world in our times trying to make sure some light shines on the wounded journeys of people enduring the history inflicted on them.﻿
Posted by Joan Nestle at 9:58 PM No comments: 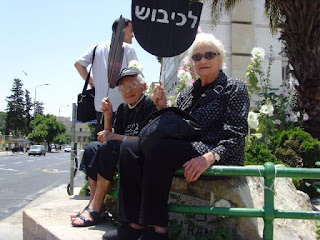 Aged bodies, deep in their knowledge of the pains of history, of men, of rabid nation states, aged Jewish women sitting for peace in the hot sun of Jerusalem, ask us to listen to the other ways. On both sides of walls, those imprisoned from within and those held hostage from their own lands, bodies speak other languages; against the iron cruelty of "administrative detention," Khader Adnan used self imposed frailty to bring attention to the sorrows of his people. Barghouthi writes: "Mr Adnan's actions over the nine weeks demonstrated that he was willingly to give his life nonviolently and selflessly to advance Palestinian freedom. Others must show similar courage...Our movement is not intended to delegitimize Israel, as the the Israeli government claims. It is, instead, a movement to delegitimize the Israeli occupation of the West Bank, which we believe is the last surviving apartheid system in the world. It is a movement that could free Palestinians from nearly 45 years of occupation and Israelis from being part of the last colonial-settler systems of our time....The power of nonviolence is that it gives Palestinians of all ages and walks of life the tools to challenge those subjugating us. And thousands of peace activists around the world have joined our movement.  In demonstrations in East Jerusalem, Silwan and Hebron we are also being joined by a new and younger Israeli peace movement that categorically rejects Israeli occupation."
Lock the dissidents up and no one will look, build bigger and bigger militarized police forces to keep people off the streets and still call it democracy, spend millions to get the right wing, "pro-Israel" candidate elected and write articles in American papers calling for the assassination of Barack Obama and call it love of democracy. Yes, the body deemed unwanted, deemed a national danger,can be locked away from the force of law by the force of nationalism; we have seen it before. But the public human heart dies a little every time the blows of a police baton force a human figure to the ground, every time the iron doors clang shut in a prison no one knows where, the sun blotted out for how long no one knows. But we do know, don't we? Not the names or the last light on the face we have never seen, but we know in our name, our governments and their allies, disappear the unwanted, the speakers of No. Frail bodies--oh our frail bodies, all the years of my life, I have seen you, arms joined, walking through their ugliness, in Soweto, in Selma, in Moscow, in Calcutta and Delhi, in Burma, making ghosts of the occupying State.

The Region under Snow 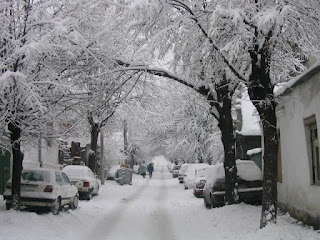 Once you have walked a city's streets, with friends, old and new, the fortunes of that place touch your heart. Lepa sent me these photos to show us what her neighborhood looked like now; Belgrade like so many other towns and cities in the region are in the grip of cold, weather so severe that over 200 people have died from exposure to it. To all we met in the summer of last year and beyond, we send our love. 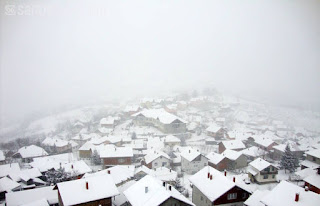 Lepa writes that she cannot take pleasure in the beauty she sees outside her window for she is warm and has running water, but just doors away lives a Romany family and like so many in the region, they do not have the comforts of indoor plumbing or heat. In her letter she tells of how she and her other lesbian friends are doing all they can to share their basic securities with these families. Children laughing in tubs of hot water, mothers washing their hair in warmth--she writes me these things to share the laughter, not for me to talk about on this journal, but I offer this sound, the happiness of children, not one's own, their laughter because they have been given moments in which they can be children again, ringing out over these snow covered roof tops of Herzegovina. This is what are States can do, must do, make joy possible for the dispossessed.
Posted by Joan Nestle at 4:38 AM No comments: 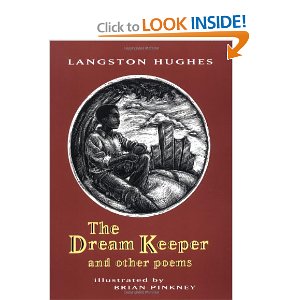 Yesterday, I received a  "non-occasion gift" from a dear friend who knew my affection for Langston Hughes--poet, essayist, columnist, anthologist, playwright, historian, internationalist, Pan Africanist, pan humanist--this red book packed safely away in bubble wrap, signed by Brian Pinkney, the wonderful illustrator of this school edition, came a long way over the sea Hughes so often wrote about: 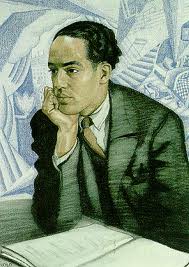 It now seems two public thinkers anchored my early life, Hughes with his daily Jess B. Simple columns in the New York Post, then a progressive workers' paper which my mother read on her long subway ride to her bookkeeper's job every day and Eleanor Roosevelt who also took to writing a column later in her life. Hughes went on to be my constant companion in my 30 years of teaching in the Queens College SEEK Program; every book I touched whether it was the great Haitian masterpiece, "Master's of the Dew," by Jacques Romain or the collected poetry of the Negritude period or anthologies of Black poets, Hughes had always been there first. I read and saw through his eyes, his commitment to ending the invisibility of such needed work, of making sure the words that  peoples needed to survive killing histories of colonialism
and racism  was where they could find them. Words, visions, understandings, that anyone touched by bigoted exclusions, would grasp for hope, comfort, strength and an end to a kind of loneliness with history. 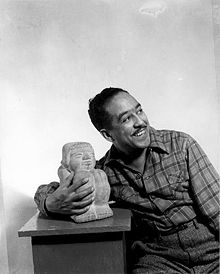 With My Old Friends in our Fitzgibbon Home, West Brunswick, January, 2012 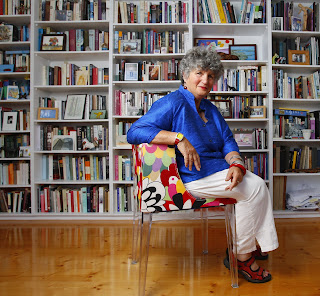 Photograph by Michael Copp
Posted by Joan Nestle at 3:04 AM 1 comment: 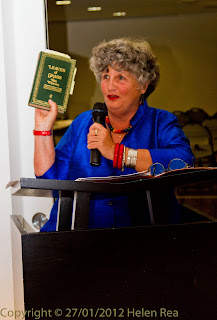 Here Queer Pride last a month and I was honored to be asked to participate in two events that took me to two contrasting parts of this sprawling city that reaches from the shores of the bay to the basalt plains stretching to Geelong. My first event was to celebrate the 2oth anniversary of Hares and Hyenas, the queer bookstore that is at the center of things here, not just queer but in all progressive ways. Crusader and Rowland, the owners and hearts behind this endeavor, make their bookstore as welcoming as they can to queer writers from abroad and here. On Saturday night, January 21st, I joined Benjamin Law, Jean Taylor, Jess Blackadder and Noel Tovey on that small stage backed by whorehouse red embossed wallpaper, reading from our Life Stories. The span of life adventures was wide, from the 29 year old Vietnamese- Australian Benjamin to the 78 year old Aboriginal and world traveled man of distinction, Noel Tovey. He and I were saved for the last part of the evening because we went the furthest back in our tellings. This was a great honor.

Then on Friday of the next week, I helped to launch the fourth Queer Culture Contemporary Art Exhibition, 2012 in the Joel Gallery, part of the Louis Joel Arts and Community Center, in Altona, a bayside community in the West of this city, over the Westgate Bridge far from what is so-often called the heart of things, city central. Oh but what a heart lies in the West. Again, I was honored to be among such fine queer artists, Richard Harding, Dovey Dee, Peter Leslie, Sprinkle Magic, Sue Manski, Anji Noor and Michael O'Hanlon, and be part of extending the center. Photographer Helen Rea took these images and kindly gave me permission to post them on this site with her copyright clearly marked. I will post soon what I read at both these events, but now before weariness takes me, I wanted to show that I was still doing my best to be part of the work and pleasure of my queer comrades. 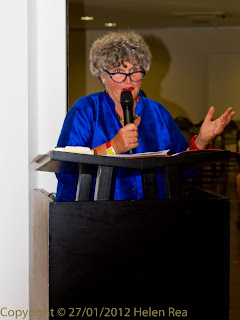 Always my gratitude to La Professoressa and our Cello who let me rest and then say, he with his wet nose and pushy self and her with her love, get up, Joan, there is still more to do, more play to come. 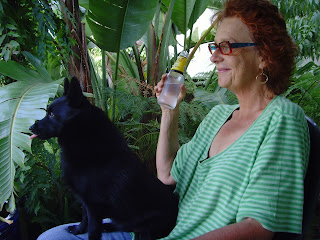 Posted by Joan Nestle at 7:55 PM No comments: