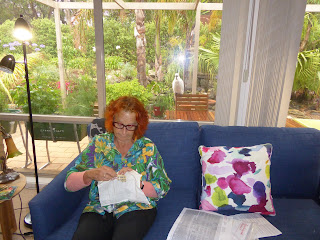 As I prepare for my 7:15 am discussion about Women in Black on CCCR community radio here, highlighting our next vigil against Israel's Occupation on March 5th, on the steps of the old General Post Office here in Melbourne from 12-1,  I think of how this part of the world has become my home, on the streets in protest, on the streets of West Brunswick, on the coast of Angelsea. Here my beloved La Professoressa embroiders Copenhagen' streets into being on blank canvas while a visiting sulphur-crested cockatoo takes in our interior life. Such a lovely place, this earth of ours. Such an endangered place, this earth of ours.
Posted by Joan Nestle at 4:00 AM No comments: 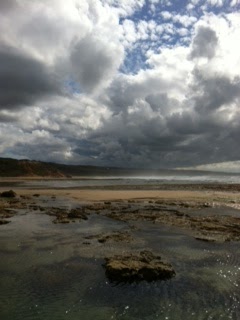 Here I walk shores that flow into oceans that flow into skies, skies as heavy as my thoughts sometimes--the times when I remember the impossible images I have seen, the impossible brutal words I have heard coming  over these seas and through these skies from the right wing election rhetoric in my old country, USA, that seems to be slipping from its own shores. The image of one Donald Trump making a gun of his hand and firing it into the viewer's face, boasting, "I could kill someone in the center of New York City and get away with it, that is how loyal my followers are."

Shebar, a good friend, who first introduced me to such things as blogging said some time ago as she watched my words dwindle in this public space, Joan, write about aging, write about your life there in Melbourne, there in that other place. I live with contradictions of beauty and sadness, with sunlight so bright it must be hidden from, from bush beauty that I have come to know--sharp, fractured, compelling it is grip on arid soil, small orchids pushing their anthems of color through the coarse grasses. My knowledge that this is country that belongs to living others, as America does as well, but that is a reality kept more hidden in my old country as least in the territories in which I lived, the urban canyons of the Northeast. The contradictions, my having been able to live in two places, while so many others are imprisoned behind walls or on small impoverished islands for wanting to live, really live, in just one promising place. At 75, I have not found peace or the wisdoms usually spoken about--I live with contradictions and the need for dire political action, with the need for interventions to stop State brutalities, with the need to be in the streets, with the need to take a nap.
Posted by Joan Nestle at 9:09 PM No comments: