A Kiss before the Taj Mahal 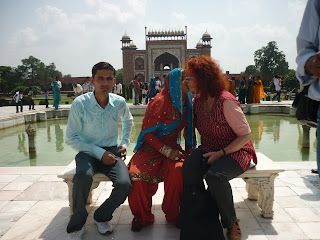 La Professoressa is indeed a magical personage; during her time in New Delhi, she and some friends visited the temple of love, the Taj Mahal, and while there, the red head sat upon a bench to rest. Next to her was a newly wed couple and the bride, taking in the hennaed hair woman next to her, made motions asking my beloved to kiss her--on her lips. La Professoressa obliged, as she is wont to do, and her friends captured this complex moment of cultural connections. For good luck, was the most offered explanation and the bride carefully kept her eyes open, so her husband had nothing to fear.  I can only wish the young couple all the best and that indeed, on my darling's lips, sat the taste of hope.
Posted by Joan Nestle at 6:36 PM No comments:

Always the courage and the despairs of human hearts push my own writing agendas off my pages. Today amidst the spurts of rain in golden sunlight, making Cello's hair studded with shining crytals, I wanted to tell you of La Professoressa's sojourn in Delhi and show you images of her planting, caring for our growing things, as she always does before she leaves on a long trip, the understanding being that Cello and I will care for these new lives in her absence, guard against loss, slow or sudden endings of her new beginnings, but Lepa sends me this and I must share it with you because it is the persistent resistance to hate that keeps our lives green. 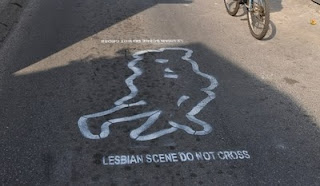 "The latest news here is that in one small town in Serbia, Jagodina, where the mayor is drastically homophobic explicitly against Pride, saying 'We don't have these people in our town, this graffitti has appeared, in English! The Lesbians of Jagodina Strike Back!" 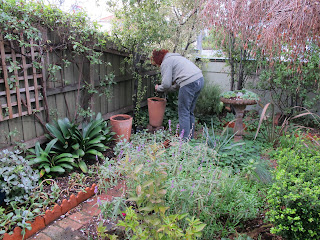 Aha, I found you, La Marvillosa, on the day you were to fly to India, setting out our daisies.
Posted by Joan Nestle at 10:39 PM No comments: 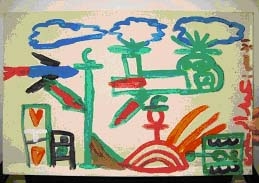 A child in a silent moment when bombs are no longer falling, when tanks have rumbled into her yesterdays, picks up a crayon and draws what her eyes see, what haunts her heart. Children under duress in so many sad parts of the world have done such things, in past times and now, but this child's drawing has been declared unfit for seeing in America in 2011. The artist seer is a girl from Gaza, and her clouds and helicopters have been taken down from the walls of the Museum of Children's Art in Oakland. As soon as word got out that the Museum and the Middle East Children's Alliance were planning to mount an exhibition called, "A Child's View of Gaza," the right wing Jewish lobby--and now I say this phrase without compunction--active in San Francisco used some of the $6 million funds made available by the Jewish Federation of North America and the Jewish Council for Public Affairs collected specifically to "effectively silence Palestinian voices in cultural institutions" to bring pressure on the museum to pull the exhibit and like many institutions before them, it bowed to this pressure. Empty Walls. What kind of a community runs in fear from the images of children? How mad has this pro-Israeli diasporic campaign to silence all criticism of Israel become? Here in Melbourne where I live, there is much debate over the call to boycott an Israeli owned sweet shop. Supporters of the boycott are called the black shirts of our times. No doors are closed. The sweets flow out of the shop, but in the name of keeping Israel safe in America, professors loose their jobs, groups loose their meeting places, threats of withdrawing funding abound. No one calls this a threat to the plurality of American discourse. This is madness. Jewish communities are becoming the courted votes of the American right wing. Bob Turner, a Republican new to politics, played the right card in his Queens district last week when he campaigned on two principles: "The debt and spending is killing job growth in America, and we must stand firmly behind ally Israel again." Money will pour in to the candidates who silence dissent over Israel's tactics in the Middle East and little by little, many diasporic Jews will help move America towards our own form of Fascism.  Madness.

Soon there will be a vote in the United Nations to give Palestine statehood, a move that some Jewish public thinkers have said is a good idea, most recently Thomas Friedman in his New York Times column and the gay pioneer and political columnist Dennis Altman in the Age here in Melbourne. Yes, Yes, Yes. I think again of the double standard that can only prevail when a form of distorted cultural valuing reigns supreme: The Israeli leaders rail at Palestine acting unilaterally while the Israeli government and its armed forces act as supreme rulers day and night over the occupied territories, always unilaterally, never consulting with other nations or the people it is abusing whether the check point guard has the power to destroy lives on a daily basis, whether this family will be thrown out of its home so a settler family can move in, whether water will be allowed to flow into an ancient well. The Palestinians are making their case to the world, asking because they do not have the power to do otherwise. Israel and America are looking into the face of a new Middle East, of a new Turkey and a new Egypt where old deals do not hold sway. It is in the best interests of Israel, of the world, for Palestine to become a free recognized nation; even more, it is the right thing. Enough with never ending displacement, with refugee camps that never end, with stagnation of hope and dreams, with the rule of military power over children. This is not the Jewish way, this must no longer be the Israeli way.

I want to write about the other images Paula has found, I want to tell you of my struggles with my body, I want to be lyrical and touch with my aging hand the faces of so many that I love, I want to tell you of my wonder at reading Isaac Babel's "Odessa Stories" and his 1920 diary, of my finding my thief mother and lost brother in those tales of Benya Kirk, the petty ruler of the Odessa shetyl and the rag clad Second Jewish Cemetery almsfolk who knew what they were doing, but as Babel wrote, "I must not send my tale down side streets even if on those side streets chestnuts are ripening and acacias are in bloom." Now I write as he did in a time of harsh sunsets and the smell of bodies hanging in the air, in a time of madness where looking backwards has replaced possibilities, where histories have become so distorted even with love and longing that only one people is allowed to survive, where only one kind of child can tell the world of her sufferings, where only one kind of heart is allowed to beat in a Jewish breast. Recently, I was sent a "warning" message, a forwarded video made to alert all Jews to what is happening at the UN, at the Durbin meetings, a well made video with words carefully spelling out all our old fears and our newer hatreds. I saw that the person who had forwarded me this Jewish alert to action was the husband of my oldest friend, a friend since I was 10, but not often seen in these past decades, and thinking I had to answer, not let the assumption pass that all Jews have the same position on these issues or would welcome such propaganda, I pushed the reply all button and wrote my reply. The next morning as I always do I opened my messages to see what New York wanted to say to me on this day, and there was his anger, his despair that I had so embarrassed him, his shame at my words, that his friends had to see such words, a Jew who said something different. Madness--not him, or his friends or the world they move in--but the madness of manipulation, of toxic fear. Friends not really. A different future, not really. Hope, not really. Unless the pictures, those small windows into a human heart, are seen again, unless Palestine is drawn in clear lines on the map of the world, unless we start to speak a different language drawn in the form of human respect. 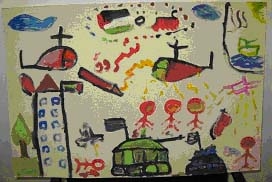