"Seniors for a More Just World" 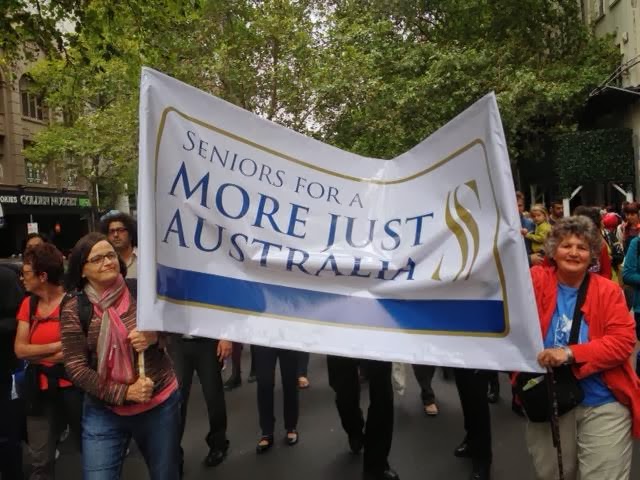 Two weeks ago, an article appeared in The Age, Melbourne's more slightly progressive newspaper with the headline,"Hit them harder, says public." Reporting on a nationwide poll that found over 60 percent of [Australian] responders "wanted to increase the severity of treatment of asylum seekers," Phillip Dorling went on to write, among the "groups most strongly favoring harsher policies are those aged over 70."  All of this was being talked about at dinner the other week and we, older lesbians all, [Beth, Pattie, La Professoressa and me] saw that something had to be done. Many of us have long histories of social activism over the years, beginning in the 1970s and before; aging has not dimmed our desire for social justice no matter what the polls may say. This is an old tactic of the right to divide and deflect critical thinking about heartless policies by turning our communities against each other. The cliches about how we turn more conservative as we age need to be challenged, as much for ourselves as for younger activists so they know we are allies, not dead wood. Our concerns are not just or even mainly for issues that concern aging but for all those whose lives are being made harder and more desperate by messianic belief in the free market coupled with scorn for what government can and should do for its citizens. At the dinner table, we spoke of what is happening to support for single parents, to disabled support systems, to asylum seekers whose fate  in the offshore detention camps is shrouded now in governmental silence. At that dinner table, we decided that it was time to do more than just talk, to start to build another way of seeing older people, especially women, and to give voice to our political knowledges, not arrogantly but as offered moments of lived historical struggle, wanting to touch the new imaginings of social change. Even as our knees ache, we demonstrate against political and social cruelties.

A conversation, a need,  a name, a banner design suggested by  Beth Marr to resemble the Australian Seniors Card, Joan tracking down a willing sign maker, La Professoressa picking up the banner at 8 in the morning before her "teaching human rights" workshop at the University, Joan searching through the garden sticks to find suitable banner frames, women stepping forward to help unfurl the banner on the terrace of the Victorian State Library while refugee rights activists, many refugees themselves, spoke to the gathering of hundreds that grew into thousands at 12:30 in the afternoon. Meeting up with Pattie for the march, our newly launched banner, "Seniors for a More Just Australia" tasting the city air for the first time, feeling the wind hits its face, feeling hands of others who wanted to hold it--even banners have histories and this was a beginning.

Many asked as we marched, where can we find out about you. Whenever there is a demo for social justice this banner will be there, find us. Older women saying, I read the newspapers and could not take it anymore, now I have a banner to march beside. Another friend, Maria, is undertaking to make a Facebook page so people will know we will be there. The banner can be passed from hand to hand, from need to need. And this is what I see now--"Seniors for a More Just....." can be an international presence. Just fill in your country, city, town. Not just ARP--the Association for Retired People in America--but a protest voice like the Grandmothers Against War. The movement is yours now. Make your own banner, have your own conversations, decide on your actions. If you look closely at the picture you will see I am still clutching my folding cane and some will roll not walk, but together we must say No, the old and the young and every one in between.

On Sunday, protests erupted at the immigration detention centre on Manus Island after asylum seekers were told their chances of resettlement outside Papua New Guinea were low, or non-existant. Last night, PNG police and locals engaged in violence against the asylum seekers, including the use of sticks, machetes and at least one gun, following the evacuation of G4S [the private police force that runs the camp] guards from the centre. Reports are now emerging that, as it currently stands, 77 asylum seekers on Manus Island have been treated for injuries, with one person reported dead, and another shot in the buttocks.

The on-going abuse of asylum seekers within the centre, and the terrible conditions they face, is no secret, despite governmental attempts at surpressing the release of information. This happens under the guise of national security framed within the militarised language of 'Operation Sovereign Borders.' Immigration Minister Scott Morrison, together with G4S--the private company running the Manus Island detention centre--have deliberately withheld information about the seriousness of the current situation and downplayed the real danger to people's lives.

The Minister cannot pass responsibility for the death of the asylum seeker onto the PNG government. He should resign. A government minister responsible for a non-military or policing portfolio cannot have lethal weapons used against those under his watch. The killing represents a serious threat to the rights of refugees and to democratic accountability.

The AJDS unequivocally condemns the violence being perpetrated against these asylum seekers, We stand in solidarity with those being detained on Manus Island, and support their resistance to mandatory detention, which we deplore and call for the immediate end of. We call for the Australian Government, the PNG Government and G4S to take immediate steps to remove asylum seekers from Manus Island and closes the detention centre.

While this is a specific moment in Australian history, "Seniors for a More Just... Your Country" can address any issue that breaks your social justice heart.

Posted by Joan Nestle at 8:18 PM No comments:

The heat broke in the middle of the day and I took aging Cello for a slow walk up our street, past the small weatherboard houses and the motel looking flats. Cello and I walking slowly, he going blind from age, I still sore from my fall and trying to be very careful where I placed my feet. And then swooping down the road came Felix, from the family across the street from our house, riding his bike, a grin on his face from the sheer pleasure of it all, 'Hi, Joan," he called out to me. A young boy whom I have come to know, for whom I want all the joy of life, soaring down the fresh wind, calling out my name--a 14 year old boy who for so many years I did not know, living in a world renowned city so far from here, lives now so close to my heart. For one moment, I too soared unafraid of falling, held in the sweetness we can give each other. 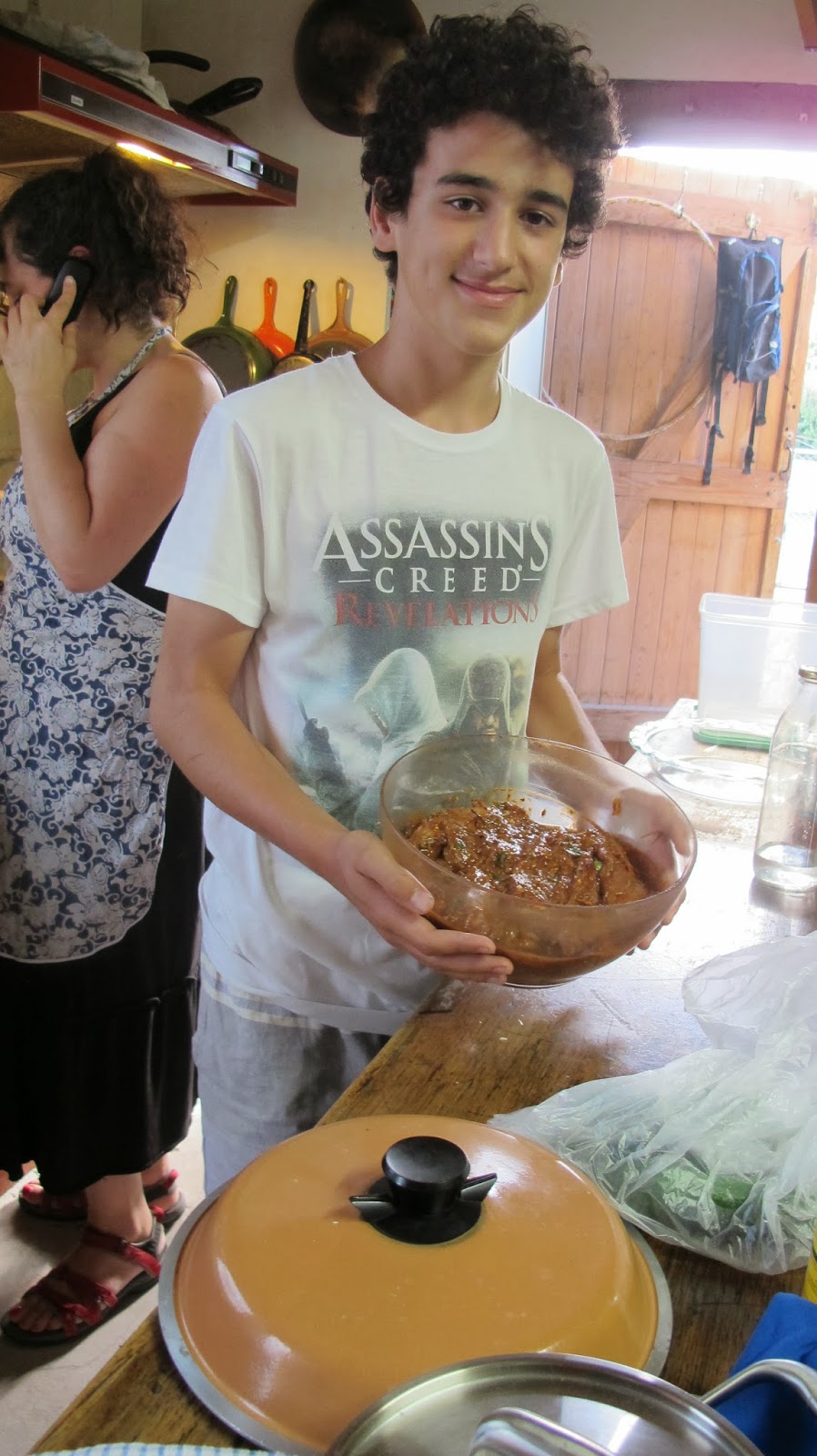 Felix, the chef with his mom, Virginia, Fitzgibbon Avenue, 2013
Posted by Joan Nestle at 4:26 AM No comments: