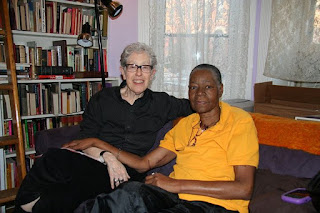 How do we come back, as the news of brutalities keep pouring over our head--the images of  Palestinian children, shackled and blind folded in Israeli prisons, treated as no Israeli parent would want their child treated for throwing a stone, for expressing anger at an all powerful occupier. "Israeli military law has been applied in the West Bank since Israel occupied the territory more than 44 years ago. Since then, more than 700,000 Palestinian, men, women and children have been detained under military orders." (The Guardian, Jan 23, 2012) An Iranian scientist is blown up, a man who is also a father, a son, and the coy Israeli general says with a smile, "I do not know who is responsible but I am not shedding any tears for him." On the news I see the grieving father for this human being for whom no tears will be shed. Israel's heart seems only to weep for its own citizens, never for its victims, and this allows the brutalization to go on and on. Provoke, deny, taunt, corral, limit, restrict, say no over and over in a thousand ways and then in the dead of night, break down the doors and take the children away. Where are you people of the world? This is a cry from a Jewish heart and many other lancemen cry it with me. "I am a friend of Israel" is the vote winning shout in the mouths of the American conservative right, and money pours into Newt's account. The second day I am elected, he says, I will make Jerusalem the capital of Israel for as he has told us, the Palestinians are an invented people. Say this to the Palestinian children, the old people, the holders of the keys of ancient homes, say it to the wells and olive trees, to the poets, say it to the stone steps of another time, now all confiscated under a new regime that "will not shed a tear." The politician, with money pouring over his head as long as he champions Israel's cause, does not care what chaos his words can unleash, what damage he is doing to any hope of peace. But that is not his concern--power is, and how foolish we have become, so many in the Diaspora,  to allow ourselves to become a single issue people, willing to support the extremes of the Right just as long as they say these words. Oh what fools we have become, but it is not only ourselves that we are pulling into this brutal vortex where no tears are shed, it is the world. We can take Iran down, Israel's leaders assure the sleep walkers of America, of Europe; we will make it all possible, the American right winks. Shed no tear for the human misery unleashed, make no effort to find a way to respect the humanity and history of the Palestinian people, to free their children from shackles, to respect their sufferings and exiles. Cold dead eyes. Who will be left to weep?

How can we come back? How do those of us who see those children in our sleep and in our days, their anonymity a searing reminder of the terribleness of absolute power partnered with a gun and a flag. I had to find my words again, and then Paula sent me this wonderful image of two old friends, Deborah and Georgia, simply sitting on the old couch at the Lesbian Herstory Archives, touching over the years, the struggles both of the body and the desire to do good in the world, and I found one moment of relief from the Wall, all the Walls. 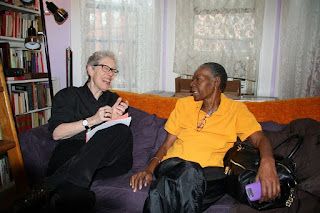 Laugh, my dear ones, the years flowing with care for so many, the other way where the length of life is thick with love.

Posted by Joan Nestle at 1:25 AM No comments:

Just to let you know, those who have remained readers, that Maddy solved the computer problems; the rest of the silence lies with me. What is happening in America, the brutal madness of the Republican right wing discourse, the unthinkable possibilities of who will hold power, and who will suffer, who are already suffering, pushes against my words, but silence serves nothing. We have each other.
Posted by Joan Nestle at 9:16 PM No comments: