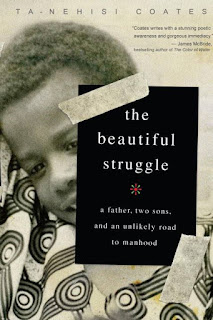 A year I never expected to reach, not from my starting point in the fractured Regina Nestle family, or from my own precarious life, precarious with the need to support myself from my teens and in the later years because of my bouts with cancer or perhaps dance is the better word. I do not beat upon cancer, I await it, I thank it for giving me years many more then I ever thought possible and I thank the doctors and nurses and the health care I have been able to access in two countries. I thank Deb and Di who shored me up during hard times and still do. It is the arms of women who have kept me walking this earth.

Yesterday was my birthday. How did I spend it? First, Di came into my room and presented me with two gifts, a silver bracelet with the word "cherish" in braille imprinted on it and a warm throw made here in our neighborhood of  West Brunswick. Cello came up on the bed and gave me a kiss. In the mailbox was a card from Deb and Teddy.

At mid day I joined La Professoressa at the Law School, where she and Ali Miller where holding a symposium on "Exploring the Structures of Gender Written into the Yogyakarta Principles." The room filled with students and colleagues and I took my usual place in the last row--a stranger to Law but known as Di's older partner who often haunts her presentations and learns, learns. Three students who have become my friends as well--Debolina, Oishik and Maddee--were there and part of the gifts of the day was holding them in my arms. Debolina and Oishik will soon return to Calcutta and continue their thinking there, beyond my reach. Maddee is a young writer, thinker, activist who the flow of life will move beyond me but for now she is willing to share her writings with me and even throw a ball around with me in the hallway of the Law School, a high bouncer that I always carry with me, the ball of my Bronx days, perfect  for Hit the Penny, Stoop Ball and just plain catch. How can I explain the joy I get from throwing and catching, the knowledge that there is  friend at the other end who will join me, the pleasure when my eye and hand work together and I snatch the ball from the air.

Home so I can work with Alexander, my 13 year old friend from across the road. We read the second act of Romeo and Juliet together, talk about his school week and I take in with great delight his treasure trove of new words he has gathered for our session. Dear Alexander who gives me once again the pure happiness I find when I can be of help to a learner, and in the process I always learn more about our human selves. I speak to him as the poet he is, a poet of soccer and struggle and together we give examples of how our lives are haunted by paradox--one of his new words.

Then I put Mendelssohn on, his trios. I have time before Di will come home and I will return to reading Ta-Nehisi Coates' memoir, "The Beautiful Struggle." As Mendelssohn's heart fills the room, I think of how some have said because of my anti-Israel occupation stance, I am not Jewish enough. Sometimes I have such a need for Yiddishkite in my life, for the diasporic old world, a taste, a sound, an atmosphere I can almost touch--my Bronx days again, my mother's worker face, the sound of Indian nuts cracking in her teeth, her Chesterfield cigarettes. So long gone to me, the only parent I knew who hardly could do that deed but somehow between standing with me when I was ten in front of the bronze plaque to the women who leaped to their death in the Triangle Shirt Waist Fire and between cracks of her nuts, telling me of the wonders of Paul Robeson, somehow this woman who turned tricks for money to pay the rent and to ease her need for touch, gave me the strength to stand alone, to make a life for myself without support, to be a queer in the late 50s and all the years beyond, somehow she gave me the life force to take on the lonelinesses that came from deviant political positions in 1950s America and beyond. Somehow. somehow.

All of this comes to me as I turn the last page of Coates living voice of life. He often feeling too fathered until the Knowledge takes him in its arms has been with me all these last days. Others have raved about the honesty, the vitality, the love, his determination to break open the American silence about what it means to be a Black man-child in this century, still, still. He breaks it open into a beautiful center of reclaimed knowledges giving back strong histories of kingdoms and poets, of organizers and resistance fighters and most of all, in the dogged determination of his father to save him from the loss of mind and heart, of life, that America turns its back on, thus encouraging the loss of generations. I kept thinking of James Baldwin, as did Coates, of the essay I taught so many times, "Native Son," in which the young Baldwin tries to flee the father who knows his history too well until Baldwin turns again to the thin harsh man in the doorway, barring his home to the white well meaning teacher, not my son, not my son--and the writer collapses into the arms of his father's history, never to be escaped, never to be run from but to be understood, the history and the man so bruised by its weight and by his love--fathers and sons trying to hold onto meaning they must dig up from the unspoken, the buried, the long withheld, the greatness of a people.

On this day that will never come again I sit with these texts, the music of Mendelssohn, the words of a man named for a newly resurrected kingdom of accomplishment, his sentences symphonies of life on the page heralding another America yet again, I sit with a young man struggling to learn, his eyes big with the push to make connections and find the words for them and I sit with the paradox that haunts me in these my last years, how did the Jewish people end up with a state in their name that imprisons children, that suffocates a whole people, that sells its history of suffering as an excuse to escape accountability. that tries to silence those who dissident, how? how?

Why are you singing this traditional song?
It's not yet spring and Passover's not here.
And what has changed this year.
On all other nights I ask the four questions, but tonight I have one more:
How long will the cycle last?
How long with the cycle of violence last?

The chased and the chaser
The beaten and the beater
When will all this madness end?
I used to be a kid and a peaceful sheep
Today I am a tiger and a ravenous wolf.
I used to be a dove and I used to be a deer,
Today I don't know who I am anymore.

Another year of dissent, of loving, of teaching and learning, of the beauty of the sea and the ancient cliffs, of Di in my arms, of Cello prancing in the face of fading life, of friends who share my days and the dreams that come at night, the dreams in which sometimes, my mother, Regina, all I had once, lives again.

Hopelessness as a Tourist Attraction 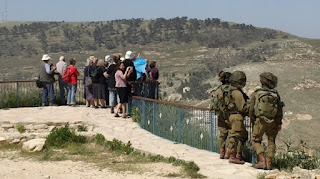 Last month I read an article entitled "Israeli Settlers Skew Focus to Tourism" (The Age, April 23, 2016, p. 40) by Middle East correspondent Anne- Marie O'Connor reporting from Havat Gilad, the West Bank. Even as I write this long introduction of the whos and wheres, I feel the anger, the heart break rising at its contents. It has taken me a month to believe again that words can do anything in the face of such heartlessness, with all the blows Israel strikes daily at Palestinian aspirations, with its control of revenue ("Israel Freezes Palestinian revenues," Jan 5, 2015) as punishment for Palestinian attempts to join the International Criminal Court, with its control of ocean, air ways, border crossings, knowing all of this, the cynicism of turning the settlements into tourist attractions stopped me cold.
"They are offering a sampling of 'the good life', with fine wines and artisanal cheese on hilltops...wine tastings are a new weapon against a two-state solution...Holiday chalets are the new facts on the ground...The 1.5 million annual visitors to the West Bank now encounter 15 new multilingual visitor centers, 20 boutique wineries and some 200 bed and breakfasts (to be found on Airbnb). A settler says, 'When people come here, they experience a different side of us: nature, music, olives, lemons. The reporter says, 'But not Palestinians?'
'It just won't fit,' the settler replies. Karni Eldad, the co-author of Yesha is Fun, a guidebook about vacationing in the West Bank gives an explanation. 'The 1970s and '80s were the settlement era, when we had to build as much as we could, otherwise they would give it back to the Arabs. We had to block the Palestinians.' 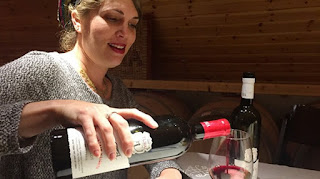 Oh, and that they have. Children lie in the rubble while tourists eat cheese in the hill tops of another people's land. Never, never say this is the nation of the Jews. This is a national policy that builds villas on the bodies of the unwanted, that turns settler colonization into a quick freeze new history. And those who book their beds on Airbnb, who pile into the buses escorted by Israeli military to the mountain tops to breath in the 'new'air, how empty are both their hearts and minds. I keep seeing the crowds that laughed as the Nazis played with their Jewish victims in the streets-- this is not a Jewish state, but a despotic State that will do anything to keep its hold on power, a bankrupt state that only knows the tools of humiliation and torture when it turns its eyes to the people Israel displaced. This Jew says build me no such States but the other way of being, the way represented by the peace activists of Israel and around the world, the inclusive way that does not dance on the mountain tops of displacement and genocide, that refuses all religious claims to exceptionalism from what one human being owes another.
Posted by Joan Nestle at 12:24 AM 3 comments: