Tonight we two leap into the moving world, La Professoressa and I. Cello sleeps and wakes now in Spottswood with his other family, Jane and Ann , and his skippergee sisters, Isabella and Dot. Little man, play well and long, we will be away for four months, away from this home I write from now, away from this continent where the sun now is fierce, the winds screaming heat from the desert and further north, where the floods began, now cyclones hurl their fury against the mainland, and so we had to leave you, held tightly in Jane's loving arms, your face unseeable in the night, but I know, I know, Cello dear. 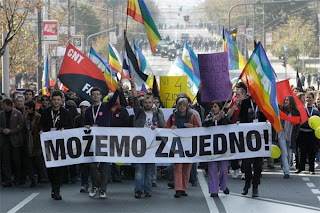 We go from turbulence to turbulence. First, a quick set down in Hong Kong and then back up into the night skies and on to London. 24 hours after departure we take up residence in London town. I will speak at the Lesbian Lives conference in Brighton on Feb 12, then our Danish friend joins us for Di's birthday and then Di heads off to a feminist conference in New Delhi. In March, with Dawn and Linda, we are off to Paris for a week and then I fly home with them to New York through to April, returning with Maureen and Mike to London for a week when Di and I go to Belgrade to finally see Lepa and her community in their home streets. Enough. Suffice to say, every thing is moving; history is waiting in the streets, in the skies. Dearest Cello and all I love, how my body will hold up to this journey I do not know but Qantas awaits and our little fellow is in the best of hands. So be us all.
Posted by Joan Nestle at 6:11 PM No comments:

Floods of Loss, Floods of Hope 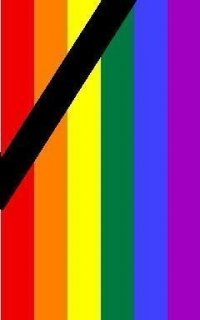 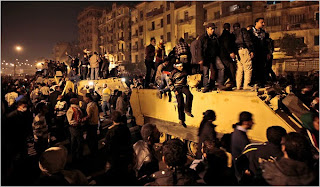 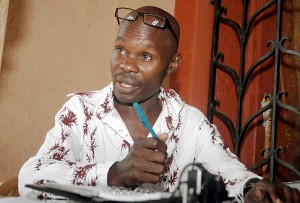 A small man, walking alongside the seemingly huge reporter, speaking of his every day life, without frills, but rich with a purpose, to make life safer, even possible, for his brothers and sisters, the Ugandan kuchu
David Kato murdered with his dream on his lips. So much is on the move this morning. First came the expected floods of abundant rivers, seeking old homelands and then came the surge of people into their streets, refusing 30 years of disdain not only from their own leader but from America as well, the governments doing balancing acts that weighed heavily against the longings of the Egyptian people. Arms and more arms, the tear gas canisters that thump into the chests of the protesters, an Australian reporter told us, in the first morning of this world change, here, see, and he held up to the camera the empty canister and read "made in Pennsylvania." A fruit vendor in Tunisia, tired of ordained famines and relentless struggle for daily life, sets his skin aflame, and the roar spills into realms of aristocracies asleep in their never questioned right to live well. I awake and David is lost, the American evangelicals have done their work well, pleasing their version of god. The death of a man who loved without force, murdered by internationally encouraged bigotries; the chosen death of a man on his own street, trying to light a larger fire of hope, and he did. I awoke to a world on the move, all turned liquid it felt. The students running through the dark London streets, thousands flooding down the main avenue of their Mid-East nation-states, Cairo and Alexandria, cities heavy with fables and tales of human invention now glow with the force of a collective human imagination. For me, in the midst of these huge flows of possibilities, I keep David always in my mind. He must be able to live and love in whatever worlds rise from the floods.
Posted by Joan Nestle at 5:51 PM No comments: 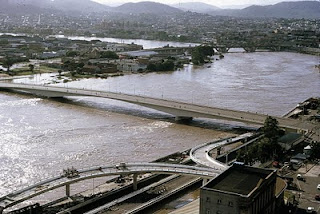 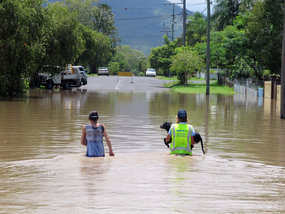 I know many of you have seen the images of towns and cities turning to brown water ways and so it is. We live in Melbourne, many kilometers  south of Brisbane and like you, are watching the flood on 24 hour news stations--but we have friends in Brisbane who have known the disorder of man-made horrors and now are experiencing the extremes to which this continent is prone. O writes, "what can I tell you? It is sad and shocking to watch the city sinking...Anna Bligh said that tomorrow morning when we wake up the city will look like a lake. We have been watching horrific scenes and our city disappearing slowly under the water, people crying and loss of life....And you are right, Di, people are doing amazing things for each other and that is nice to see. It is always in these sort of crises that people come together...human connections are unbreakable and that is comforting--Ugi [their little young dog] is also unsettled these days. He can sense something is deeply wrong." Snakes in flooded kitchens, kangaroos swimming for their lives, and the brown,brown river of Brisbane is restless, forsaking domesticating urban barriers to seep into its ancient water bed again. All rivers here are brown, Di has told me, our Yarra, Melbourne's Hudson,and all the others, mostly quiet things and in many places, just trickles or rocky empty channels for years and years but not now. Continuous rain in Melbourne for two days now, the air heavy with moisture and heat. In some way I feel privileged to be part of another continent's history, to witness the challenges that have faced Australians for so many years, and I am beginning to recognize that Aussie spirit, in cut offs and tank top. of all sexes, saying just get on with it, mate. And help the one down what was once a street to get on with it too. Something that is exceptional about all this is that it is women leaders who are captaining this ship--from the Prime Minister to the leaders of Queensland and New South Wales, the most affected states. Tired and strong, they talk to the people almost every hour, shepherding us through the terror and the loss. A child swept out of the hands of the rescuers, a mother and her children found too late in their floating car.

Global warming, the skeptics say not, much like those who are saying that the killings in Tucson had nothing to do with the "kill em" rhetoric of the frenzied right but the waters will rise, the bush fires burn, the seas grow warmer right under their feet and all the guns in the world will not preserve their "only us" geographies.

In my own body, I try to prepare for the Brighton talk, for the four month journey we will be taking on the first of February,while I wait for the results of two biopsies, the river of cancer running always through my later life.
Posted by Joan Nestle at 4:45 AM No comments:

The Faces of the Lost 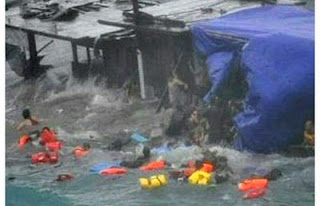 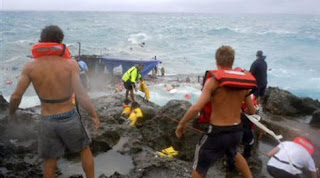 I know many days have slid by since my last letter to you all. Part of me is still witnessing the asylum seekers boat that was allowed to crash against the crushing rocks of Christmas Island at the end of last year. There on our shiny television screens, we watched as a wooden boat was pounded again and again into the deadly shore, we could see faces first on the wooden boat and then in the water, we could see a child's hand rising out of the surging surf, and then sinking below the waters, we watched people fleeing the hardships of Iraq loose their lives on a coast without a heart. Travellers haunted by a history we brought to them, a war we bragged about, as if it would be a display of fireworks, and then the long years of a country's degradation, crashing into the hopeless lack of a country's will to make arrival something one can survive. So many countries of the affluent world fearing the breach of their borders, the endangering of who they think they are, the loss of cultural purity, and so the haunted ones die in the waters, in the sands, under the trucks, die at the foot of walls and fences--oh what a time this is when I can watch, in bright color, women and men and children sinking under the weight of their exile from human care, when I can hear their cries and then their silences. We too, the ones in shock and disbelieve at what we are seeing, are also slowly, slowly losing ourselves in these waters, at the borders, before the walls; what we work so hard to protect from the desperate becomes our own prison of joyless security.
Posted by Joan Nestle at 4:52 AM No comments: