Here in one of the richest countries in today's world, the Liberal cohorts, mostly white men firm in their religious beliefs that marries wealth to the blessings of god, that uses language like, "the adults are now in power" and "we will be methodical" are calling for austerity measures that fall hardest on those deemed not of the blessed--the poor, the single mother, the struggling family, the already abandoned first Australians, young out of work Australians, on the earth itself. Using phrases," The Age of Entitlements is Over" and "Be a Lifter, not a Leaner," Tony Abbott and Joe Hockey have set out to bring the worst of American politics to these shores, seeing environmental concerns as a Communist plot, cutting support for the arts, preaching the message that no good upstanding citizen would expect a compassionate socially concerned government. What is government to the Liberals?--high military spending, big business give aways, cutting away of foreign aid, severe treatment of asylum seekers under the rubric, we will protect our borders. Prisons, armies, detention centers and good cigars for the power holders. But like for so many other politicians of their kind, informal moments prove their undoing. Joe Hockey, sitting outside the walls of Parliament House in Canberra, basking in the sun, taking deep puffs of his Cuban cigar, his pleasures ensured. The Minister of Education is caught on camera calling a Labor adversary, "a cunt." Behind the economic onslaught is the campaign to weaken the power of dissent--so the ABC, Australia's national broadcasting company, famous for its civic service and high quality of programming has and will loose millions from its budget. The SBS, an international news and culture network, the likes of which American viewers never had a chance to enjoy, watches as its governmental funds melt away. Healthcare slowly being privatized, higher education opened to the "free" market while Abbott mouths words, "we can't burden our grandchildren with our debts." The middle class and struggling young seen as expendable. But, this is Australia, a country that has known better, where one can find Trade Halls thick with the history of working people, the land where the 8 hour word day first took hold. The people remember and this weekend thousands took to the streets, in Brisbane, in Melbourne, in Sydney, in Perth; not so fast to the mine owners drowning in their pillaged, protected wealth, not so fast to the uncontrolled sunning of class privilege.


Oh, how we make our worlds, how swept up we get in the moral certainties of who is to be saved and how and who is to be punished. In Australian Notebooks, artist and cultural commentator, Betty Churcher quotes the South African artist William Kentridge: "The history of the last 200 years has shown that the most toxic combination in the world is the combination of the certainty of being right and the monopoly of power."

My body is cold. I am trying to stay in life.
Posted by Joan Nestle at 5:06 PM No comments:

I Am Back, I hope 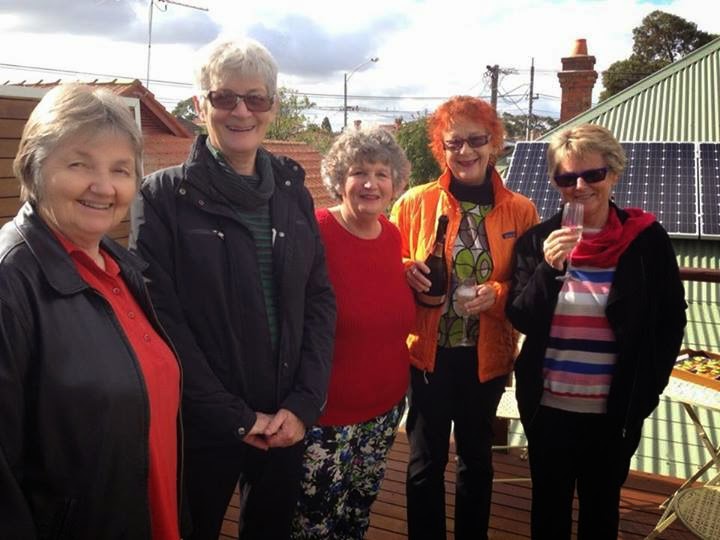 Thank you, dear Maddy, again for helping me out. Dear friends, I lost my computer capabilities and thus lost you. So much has happened in the ensuing days. The taken girls, the right wing Abbot budget here, the taken hopes of the young. Little by little, I hope I will find my voice again. Here is an image of Louise, Patty, myself, La Professoressa and Beth celebrating on our roof top my 74th birthday. I thank all who sent me greetings from so many places, from so many memories. Thank you, thank you.
Posted by Joan Nestle at 6:19 AM No comments: