Talking about Sex in Kosovo, December, 2012

As I said, much has been pressing at me, words and actions that come to me from so many friends all over the world, friends who break through restrictions and borders, creating new regions for thought and feeling. Lepa  Mladjenovic sent me word of what had happened at the launch of Kosovo 2.0 and before La Professoressa and I leave for a human rights workshop in Sydney where the winds are howling and the sea is  pounding the shores, I wanted to make sure I told you of this courage of thought, action and community. 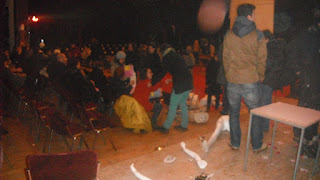 Letter from the editor, Besa Luci:

"We've been set on doing a sex issue since we launched Kosovo 2.0. We've always been determined to make visible what is taken for granted, whether it is image, corruption or religion (our previous issues). Therefore, it felt appropriate to take sex apart.

Never before has the media in Kosovo genuinely and openly initiated a public discussion on sex and sexuality. During our process, messages of anticipation and direct queries about the contents of this magazine have driven us to take on the topic courageously.

In this issue, we base our understanding of sex on the idea that it is a political apparatus through which bodies are regulated, controlled and disciplined. Sex in our society is talked about by not talking about it. In fact, sex remains among the most misconstrued and inadmissible topics subject to conflicting understandings of what constitutes sexual freedom; how we define backwardness or emancipation as they relate to sex; what it means to be attracted to the same sex; or how one understands one's own body.

Meanwhile, hesitation, fear and resistance to talking about sex are apparent in the rest of the Western Balkans, as well. And they meet at a common impasse. In the past 20 years, our societies have undergone political and social transformations from socialist to nationalist to democratic rhetoric. This has not only affected how we understand and express our national identities, but it has strengthened patriarchy and heterosexual normativity.

If we only look at the mainstream discourse around gender equality, we'll repeatedly hear terms such as "emancipation," "political representation," "awareness raising" and "discrimination," and these are mostly used to explain strides in making women equal to men. While gender discrimination is, in fact, mainly directed towards women, rarely are notions of manhood and masculinity critiqued or challenged--particularly in how constructions of manhood perpetuate images of men as heads of households, heads of state, breadwinners, thinkers and more. The mainstream gender equality discourse, thereby, rarely challenges the gendered division of labor and roles, which also translate to sexual relations.

So, ultimately, the battle among and within the sexes boils down to the basic request that in the act of sex, men act (penetrate) and women receive (passive recipient). As such determinants frame "normal" heterosexual relationships, they are therefore used to excuse homophobia. The space to challenge such norms seems small.

We discovered that throughout our region, many struggle with multilayered constraints that appear in various forms of pressure and repression. Our stories acknowledge them, and give a thorough account of how lesbian, gay, straight, bisexual, transgender and intersex people negotiate their lives with regard to their own identities, genders, family, communities, as well as how they deal with a lack of social support and widespread displays of homophobia.

Our message and position are clear. We see this magazine as a call to everyone to come out and break free with their sexuality. It's an appeal to bring to an end social and legal barriers that prevent people from openly expressing their sexuality, living their sexual freedoms, and equally participating and shaping the public sphere.

The struggle is undoubtedly harsh, and the stories you'll hear aren't always pleasant. Discriminatory behaviour and language and incidents of violence prove that. As recently as a few years ago, mainstream media allowed for LGBT hate speech to be published and even validated for acts of hatred. LGBT people and their supporters have been failing to organize Pride parades, cross regionally, because of security concerns, as participants' personal safety is not guaranteed. State institutions continue to disregard legislative and educational reforms that would make for equal and fair participation, and representation, for all sexes. Essentially,  those whom we see as protectors of our well-being--be it police, doctors, schools, teachers or families--fail us.

Clearly no genuine discussion on human rights has begun if we continue to treat sex as an issue of what is "right or wrong," "natural" or "unnatural," or socially acceptable. The change that should happen is political, and sexual orientation and sexual freedom, as an individual's right over her or his body, emotions and self, need to be recognized.

So with this magazine, we aim to break the culture of silence, shame and violence. In doing so, we join those who already have taken the lead to fight for everyone's personal freedom."

Kosovo 2.0 is a Supreme Network site that will serve as an interactive generator of stories, commentaries and documentations from Kosovo and the world.

December 15, 2013
From Lepa Mladjenovic writing of her reading with Igballe Rogova and herself of their lesbian anti-war letters to each other, in Prishtinta, Kosova

Igballe and I came an hour before the event that was supposed to be a promotion of the so-named Sex issue of the youth magazine Kosovo 2.0 here in Prishtina. The organisers reported to police yesterday that Mujahedins have threatened the staff and 4 policemen (only 4!) were there.

About 20 minutes before the beginning of the event, there were about 10-12 of us there, and all of a sudden a group of 15 men ran into the hall with tear gas and started to break the tables, chairs  as well as the statues...the young girls were screaming, it was total chaos. It all finished in a couple of minutes. I send some photos so you can see the damage. It was supposed to send us a message of threat and to scare us all. Especially as there were young people organizing the event, lots of young men and women. 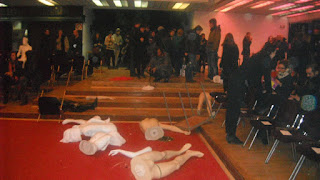 Igballe Rogova in these situations is standing where she is and she watched everything from the nearest place possible--brave as she is. The attack was well organized as police let the attackers into the building, and the attackers did not touch any of the people, just smashed things.

Half an hour later, we started the evening and since Igballe and me were the most experienced and we were calm saying we were ready to read our letters as we planned, the women who were organizers and facilitators of the evening then said OK. They were most perplexed as of what to do in this new situation. They were young and nothing similar they had had in their lives. So the feminist facilitator from Prishtina came out and said that "the private is political," and announced our letters in the most beautiful way. Everything calmed down and in total silence the two feminist lesbians--friends, me and Iballe--one from Serbia, one Albanian from Kosova, we read our letters. I read first a short version that was published in this magazine and then in total silence of about a hundred people, Iballe read her letter, while I cried at the end and we embraced.

There was huge applause. Then there was a discussion about the attack and in the discussion the first one to speak was a lesbian from Kosova who was so angry because of the attack she took this opportunity come out publicly and we made a great applause for her. Bravo! That meant that Igballe Rogova is not alone. After more wonderful comments, the evening was over, a great success, and we left to go to an Italian restaurant run by a lesbian from Italy. Igballe got some nasty text messages on her mobile that she will report to the police tomorrow but she also received many messages of support, from Haya, Rachel, Lieve, Ariane, Aida, Nela and others.

I am now in the home of Igballe and her partner, they left to sleep. Another history of lesbians has started tonight in the Balkans, in solidarity and feminist passion. Thank you for being who you are so that I can write to you--and feel we are not alone here.

While I read these words, I kept thinking of when Di and I were speaking with lesbian, feminist and queer activists from the region meeting in Belgrade, of the historical butch-fem images I had brought into the late night darkened room, of the excitement of speaking about bodies and desires, of my own life of writing and speaking about sex in the public air and I realized as I do over and over, how gracious life has been to me and how I yearn for a world where no rage lies in wait for public words of desire and love.
Posted by Joan Nestle at 7:35 PM