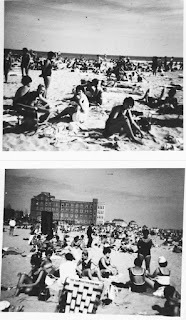 The Gay Beach, Riis Park, c. 1961, the lesbian friendship circle of Joan and Carol, sitting with back to camera and halter tops

This morning, one before La Professoressa arrives home, I found these most wonderful images retrieved from all my photos that I gave to LHA early in my history with it. The woman who made this gift possible and so many more is Saskia Scheffer, our photography care taker who has been working at the archives for many years now and who herself is a most wonderful photographer. These are rare images of the public gay beach, Riis Park, in Brooklyn, in the early 1960s and the woman seated with her back to the camera in the bottom image, her halter topped edged in white, is my first loved woman lover, Carol Betty Lipman. Dear Carol, you were always in my heart when I started working with others to create LHA, you who died just a few years later from ovarian cancer because a big shot male doctor dismissed your pain as "women's problems."  Here I see the whole of you in that slanted body, your broad shoulders, the two piece swim suit that I can feel between my fingers as I write. Here is what I wrote of this working class beach so many years ago, always striving to keep life in your memory.

I may never change my name to nouns of sea or land or air, but I have loved this earth in all the ways she let me get close to her. Even the earth beneath the city streets sang to my legs as I strode around this city, watching the sun glint off windows, looking up at the West Side sky immense as it reached from the river to the hills of Central Park. Not a Kansas sky paralleled by a flat earth, but a sky forcing its blue between the water towers and the ornate peaks that try to catch it.

And then my deepest joy, when the hot weekends came, sometimes as early as May but surely by June. I would leave East Ninth street early on Saturday morning, wearing my bathing suit under my shorts, and head for the BMT, the start of a two-hour subway and bus trip that would take me to Riis Park--my Riviera, my Fire Island, my gay beach--where I could spread my blanket and watch strong butches challenge each other by weightlifting filled garbage cans, where I could see tattoos bulge with womanly effort and hear the shouts of the softball game come floating over the fence.

The subway wound its way through lower Manhattan, out to Brooklyn, and finally reached its last stop, Flatbush Avenue. I always had a book to read but would periodically cruise the car, becoming adept at picking out the gay passengers, the ones with longing faces turned towards the sun waiting for them at the end of the line. Sometimes I would find my Lesbian couple, older women, wide-hipped, shoulders touching, sitting with their cooler filled with beer and cold chicken.

The last stop was a one-way, long station, but I could already smell the sea air. We crushed through the turnstiles, up onto Flatbush Avenue, which stretched like a royal highway to the temple of the sea. We would wait on line for the bus to pull in, a very gay line, and then as we moved down Flatbush, teenagers loud with their own lust poured into the bus. There were hostile encounters, the usual stares at the freaks, whispered taunts of faggot, lezzie, is that a man or a woman, but we did not care. We were heading to the sun, to our piece of the beach where we could kiss and hug and enjoy looking at each other.

The bus rolled down Flatbush , past low-two story family houses, neighborhoods with their beauty parlors and pizza joints. There were the only times that I, born in the Bronx, loved Brooklyn. I knew that at the end of that residential hegemony was the ocean that I loved to dive into, that I watched turn purple in the late afternoon sun, that made me feel clean and young and strong, ready for a night of loving, my skin living with salt, clean enough for my lover's tongue, my body reaching to give to my lover's hands the fullness I had been given by the sea.

I would sit on the edge of my blanket, watching every touch, every flirtatious move around me, noting every curve of flesh, every erection, every nipple hard with irritation or desire. I drank in the spectacle of Lesbian and gay men's sensuality, always looking for the tall dark butch who would walk over and stand above me, her shadow breaking the sun, asking my name.

And the times, I came with my lover, Carol, the wonder of kissing on the hot blanket in the sunlight, the joy of laying my head in her lap as we sat and watched the waves grow small in the dusk. The wonderful joy of my lover's body stretched over me, rolling into the sand, our wrestling, our laughter, chases leading into the cooling water. I would wrap my legs around her, and she would bounce me on the sea, or I would duck below the surface and suck her nipples, pulling them into the ocean.

Whenever I turned away from the ocean to face the low cement wall that ran along the back of our beach, I was forced to remember that we were always watched: by teenagers on bikes, pointing and laughing, and by more serious starers who used telescopes to focus in on us. But we were undaunted. Even the cops deciding to clean up the beach by arresting men whose suits were judged too minimal, hauling them over the sand into the police wagon, did not destroy our sun.

Only once do I remember the potential power of our people becoming a visible thing, like a mighty arm threatening revenge if respect was not paid. A young man was brought ashore by the exhausted lifeguards and his lover fell to his knees, keening his loss. A terrible quiet fell on our beach, and like the moon drawing the tides, we formed an ever widening circle around the lovers, opening a path only wide enough for the police carrying the stretcher, our silence threatening our anger if this grief was not respected. The police, sinking into the sand under the weight of their uniforms, looked around and stopped joking. Silently they placed the dead youth on the stretcher and started the long walk away from the ocean. His lover, supported by friends, followed behind, and then like a thick human rope, we all marched after them, our near-naked bodies shining with palm oil and sweat, men and women walking in a bursting silence behind the body, escorting it to the ambulance, past the staring interlopers. The freaks had turned into a people to whom respect must be paid.

Later in my life I learned the glories of Fire Island, the luxury of Cherry Grove. But this tired beach, filled with the children of the boroughs, was my first free place where I could face the ocean that claimed me as its daughter and kiss in blazing sunlight the salt-tinged lips of the woman I loved.

I write these words so far away from this time and place, but as I watch the words come, I feel the touch of bodies in each one, my realization that I was a freak before I was anything else, and that this time and community lived in every identity that came after. Thank you again, Saskia, for all you give in these darkening   images.