In Our Own Hands, an Afternoon of Intergenerational Pillowtalk at 4 Fitzgibbon, March 2, 2013 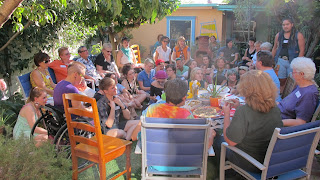 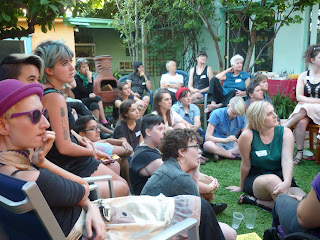 So much life, I must run with my words to catch up with you, a stumbling run and perhaps in strange orders, but you will find the sense of things, I think. On March 2nd, a group of young people, I cannot use any simple gender words, their realities and desires do not fall that way, and a group of more definite older lesbians, met for a late afternoon gathering at 4 Fitzgibbon, my echo of the wonders of LHA at 13A, to eat, talk, read, speak, sing and dance. This coming together of almost 60 queer bodied and imagening shes, hes, theys, was made possible by the work of Terry, Caspar, Vanessa, Jess, Jemma, all in their early 20s, and myself, meeting just to talk about our histories of desire. I had first met some of them at a demonstration for refugee rights--you can find that story in the history of this journal--and out of these talks came our big idea for a community event, "Taking Things into Our Own Hands: An Afternoon of Intergenerational Pillow Talk." 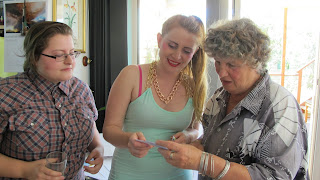 Before the gathering, going over plans with Vanessa and Terry

Gray heads and heads of all colors, forced by the sun to sit at each other's feet, meeting each other for the first time, eating the salads and cakes, brought so lovingly across town from Footscray or Northcote, an old fashioned potluck where Di and I filled the laundry sink with juices and selzter, and I made a pasta salad big enough for a small town and that was what it all felt like, as my new friends brought their friends flooding through the open gates of 4 Fitzgibbon. 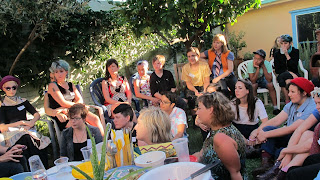 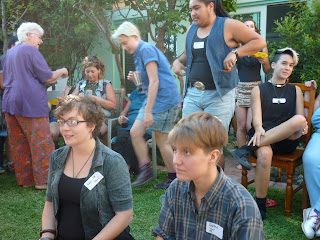 Let's have name tags, Caspar had suggested so we can all know how someone would like to be seen or what pronoun to use and I added, "let's put our ages on them too" so decades could speak to decades, activisms could look each other in the eye. And hope, another time of possibilities, appeared on those funny little white tags when Ria's child, Medea, wrote on her lable,  "Medea, NJ nickname, age 10, Tom Boy." 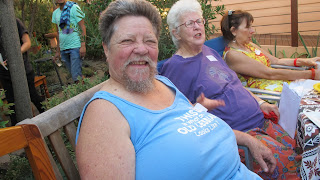 Oh, the pictures I have, taken by the ten year old son of Ria, Theo, who used my camera to capture the faces, the gazes of the gathered, much better then I could ever do.

The ramp became a stage and poets and children and activists from the 70s told their stories and sung their song parodies into the now golden late afternoon sun. 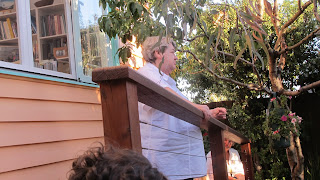 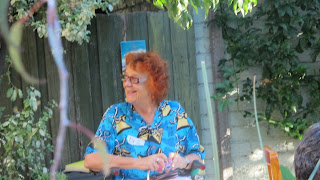 Sue and Di, comrades from the social struggles of the 70s, lead the crowd in singing "Cunninlingus Chew Chew," (written by the same Sue Jackson and Jenny Pausacker) from "Something Good: A Feminist Sing-a Long Songbook," complied by Di and Andy Malone, 1981, after first humming the tune so all could join in:
We're off to meet the latest party at the station
The Daylight is in, we're gonna meet it again.
Say can you afford to board the Overland to Melbourne?
It's your turn this time, I just haven't a dime.

Well, its those lesbian farewells that get the public upset.
Interstate romances they will never forget.
Whiskey in the diner, masturbation's finer,
Sydney, Melbourne, Adelaide here I come.

It looked like a trend, but its become a way of living.
What happened to Perth? Oh, they've booked the next berth.
At least you can't say I'm gonna stay with you forever.
True!
But are those lesbian concessions ever coming through!

(Written in 1975, when a number of women were involved in interstate relationships, and enormous public farewells at railway stations were a regular event.)

How we all laughed in this time of 2013, in that backyard, many of the younger ones asking for copies and how touched I was once again by both the specificity of our lesbian lives, shaped by geographies and economics, and so much more, finding ways to announce our desire. 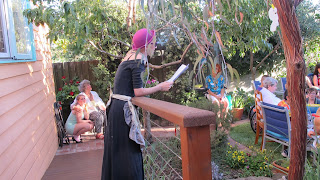 Faces touched by the ending of a day and appreciations for other days now alive once again in the light of new histories. 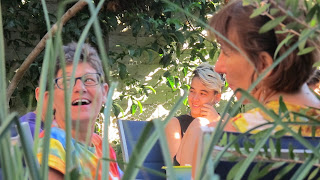 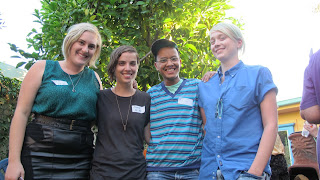 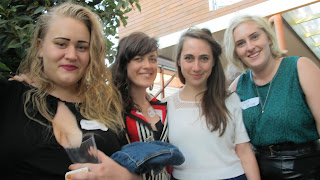 For four hours, bodies spilled through our home, a decision made by all to try out this thing, of 72 and 61 talking to 23 and 25, of how we dreamed ourselves. 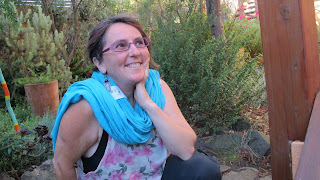 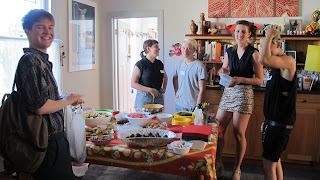 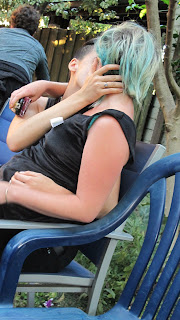 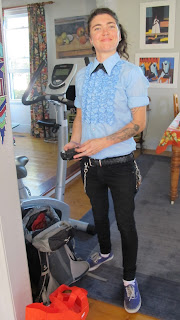 Dear Caspar, asking me what she should wear, and I chose her blue ruffled tux, she who believed along with Gemma and Terry and Jess that no worries, all of this was possible. 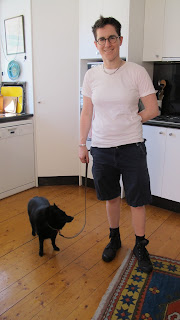 Dear Maddy who came over to help us get the house ready and keep an eye on Cello who wore his own tag, "Cello, boy, 11 years." 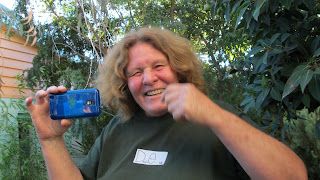 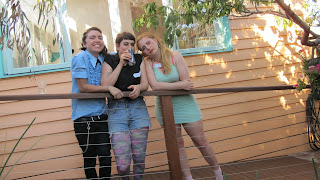 Caspar, Gemma and Terry--who pulled it all together.  May life hold you dear.