Heart and Soul of So Much--Deborah Edel 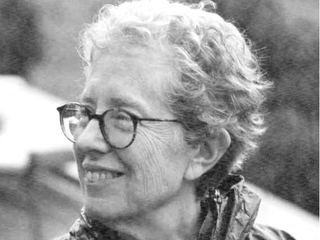 This year Deborah Edel, co-founder of the Lesbian Herstory Archives and dearest of friends will be leaving another project to which she has dedicated so many years. For those of you who do not know the other career of Deborah and for another moment in our lesbian history, here is an article written in a Brooklyn neighborhood newspaper on May 14, 2012.

"You have to know that Deborah is unbelievable. She's the heart and soul  of the school," said Debbie Zlotowitz, head of the school. "She offers wisdom, compassion and understanding--that's who she is. She worked with all the classroom teachers to help them understand the kids better, and she worked with families too."

Edel was hired at Mary McDowell in 1985, just a year after the school opened. She worked partime in the admissions department while she also serving as a psychologist at a mental hospital in Coney Island.

Then, in 1999, she began working full time at the school, playing a dual role as director of admissions and senior psychologist, or head counselor to the school.

"I met with children and families to decide whether we would be a good fit for the children," said Edel of Mary McDowell. "I still get calls from parents of alumni students who are now adults. They call me with questions about life decisions or issues that may arise. I also get parents who call about good things, about moments they want to share. These are the relationships that carry on."

A new director of admissions was chosen from within the school to follow in Edel's footsteps. Heather Burchyns, who is currently director of the lower elementary school will serve in her place...

Parents and fellow faculty members will be throwing a farewell party on May 22 to send Edel off. Edel said that after she retires, she plans to travel with her partner. "I've already booked the tickets," she said.

Her departure marks a bittersweet moment for those with children at the school.
"Deborah Edel changed our daughter's life (and our family's life too) by her compassion and calm kindness," wrote one of the parents. "I can't imagine MMFS without her, but I wish her a joyous retirement--she has more then earned it." 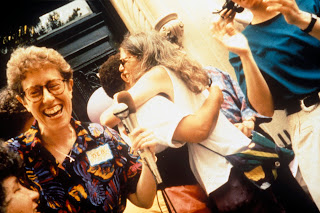 Deborah, in the early 1990s, at the opening of the new home for the Lesbian Herstory Archives, with Maxine and Paula hugging in the background