March in March, against the Arrogances of the Abbott Government, in Expression of Worries, March 16, 2014

On March 14, we joined 30,000 other people marching with their worries on their placards, their despair at how the government is punishing asylum seekers, building more highways and less public transport, attacking union rights, raising medical costs, cutting supportive services for single mothers--a  myriad of concerns. At 12:00, La Professoressa dropped me off on the corner across from the Victorian State Library where  throngs already poured out into the road, trams stopped in their tracks, police busy on their phones reporting on the rivers of demonstrators pouring in from every direction. As I stood waiting for La Professoressa and our friends to find me, I breathed in the passage of dreams around me, the wonder of people caring enough about small and huge events in their lives and in the life of the larger community that with children in tow, with friends in wheel chairs, neighbors, comrade activists, students, teachers they interrupted their daily lives and became a public wave of discontent--so many times in my life I have been lucky enough and determined enough  to be part of such orderly impassioned throngs, from the anti-war protests of the 60s, the civil rights march from Selma to Montgomery, the anti-war protests of the 90s, and on through the decades, people voting with their feet. I saw it all again on Sunday, the excitement in the air, the t-shirts and placards proclaiming concern and identity,  Mid Wives and Nurses flowed past me, taxi drivers and their wives, union members of all kinds, the anti new road tunnel contingent, and many many more proclaiming their shame at how the Abbott government makes a sham of open governing, its secrets growing every day in the name of its "methodical" exercise of power. 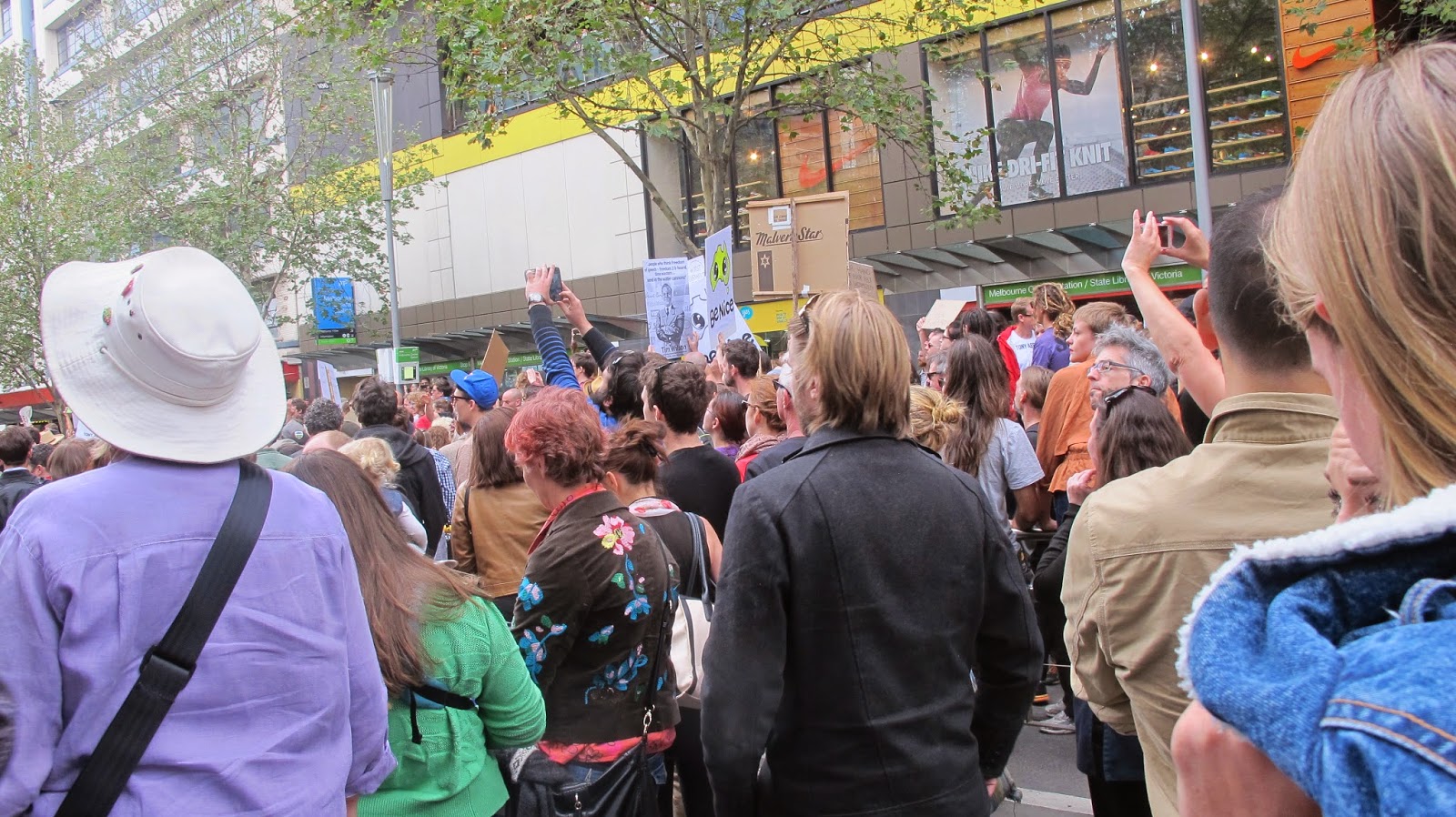 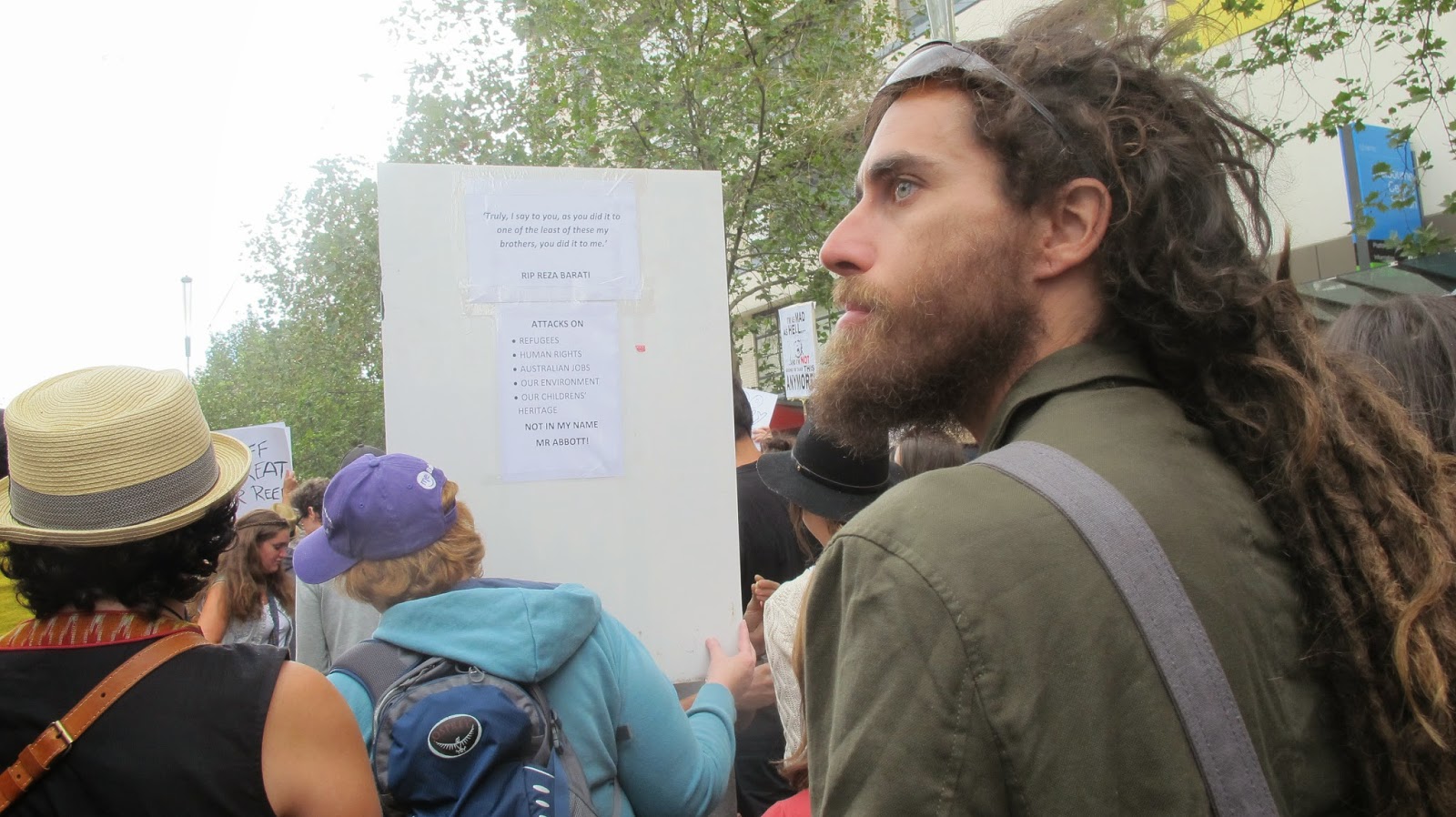 We had started preparing our banner, the one you will get to know very well, for this is its story as well, early in the morning, cutting wind vents in its tough hide so those who were guiding it down its many streets would not be blown off the line of march. 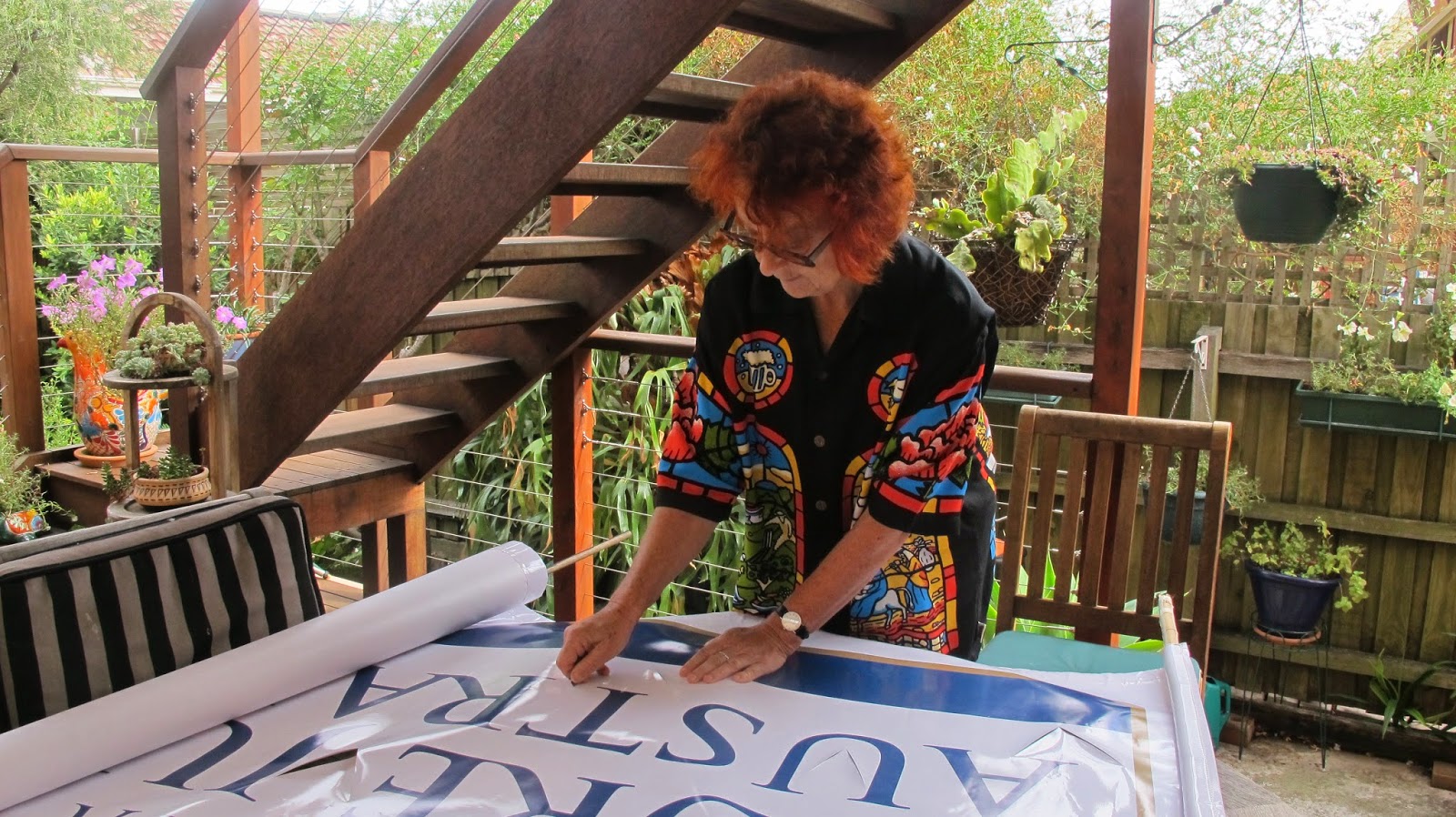 La Professoressa does all the detailed work in our lives, it seems. Once ready for its fourth outing, the banner was carefully placed in the car and we were off. 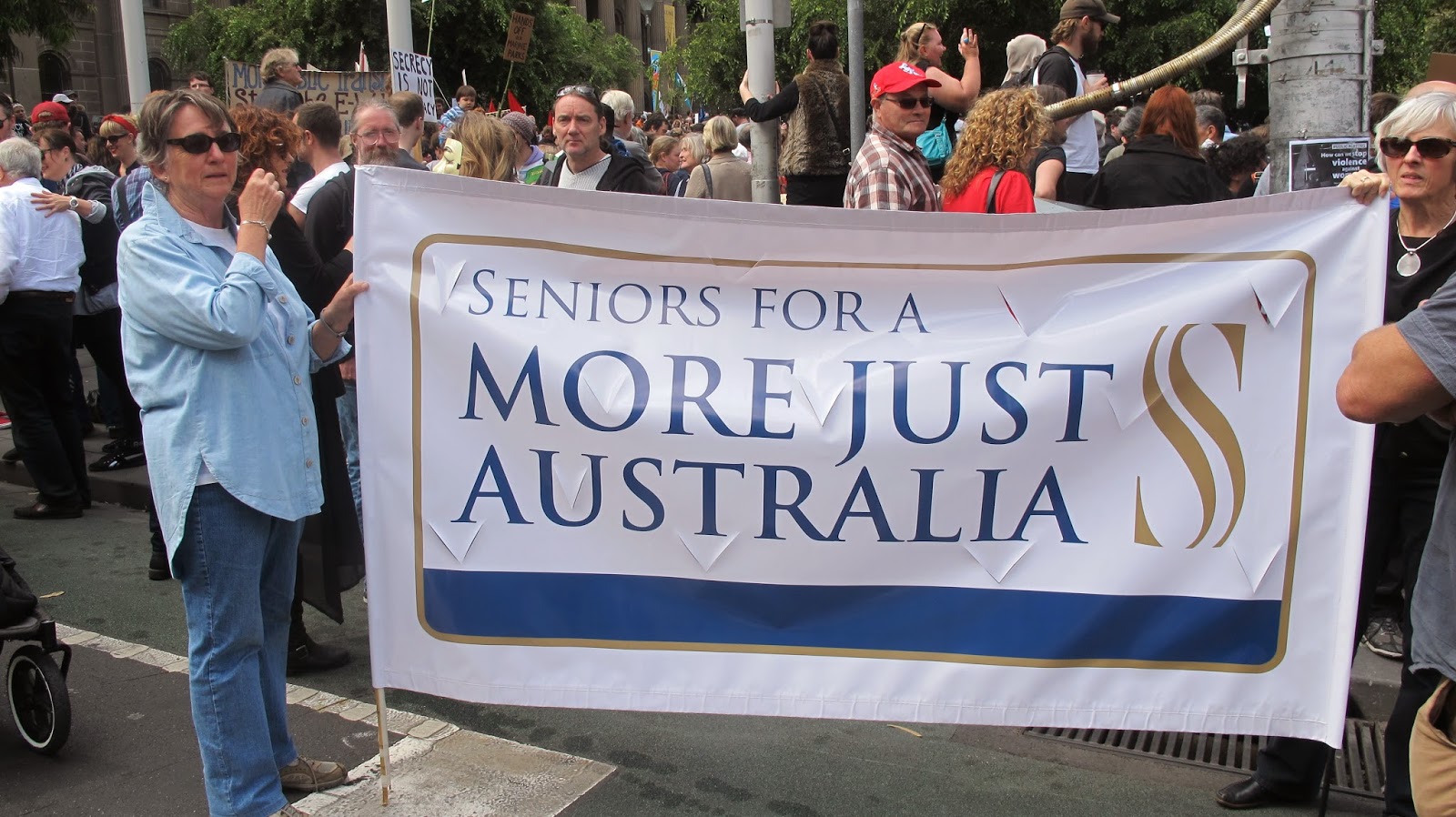 Maureen and Maria with the banner, waiting to step off, Michelle joining us, other hands reaching for the banner... 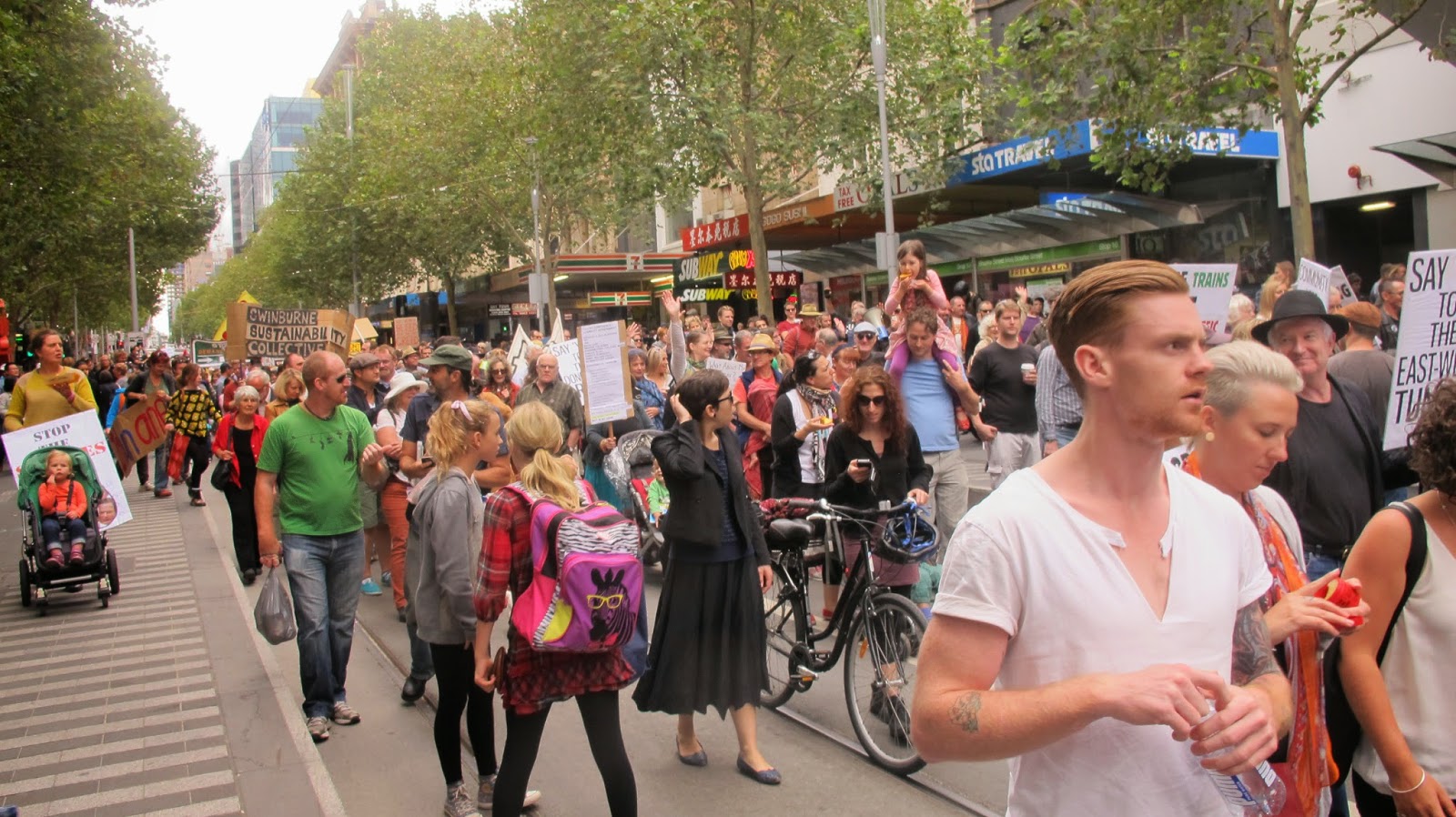 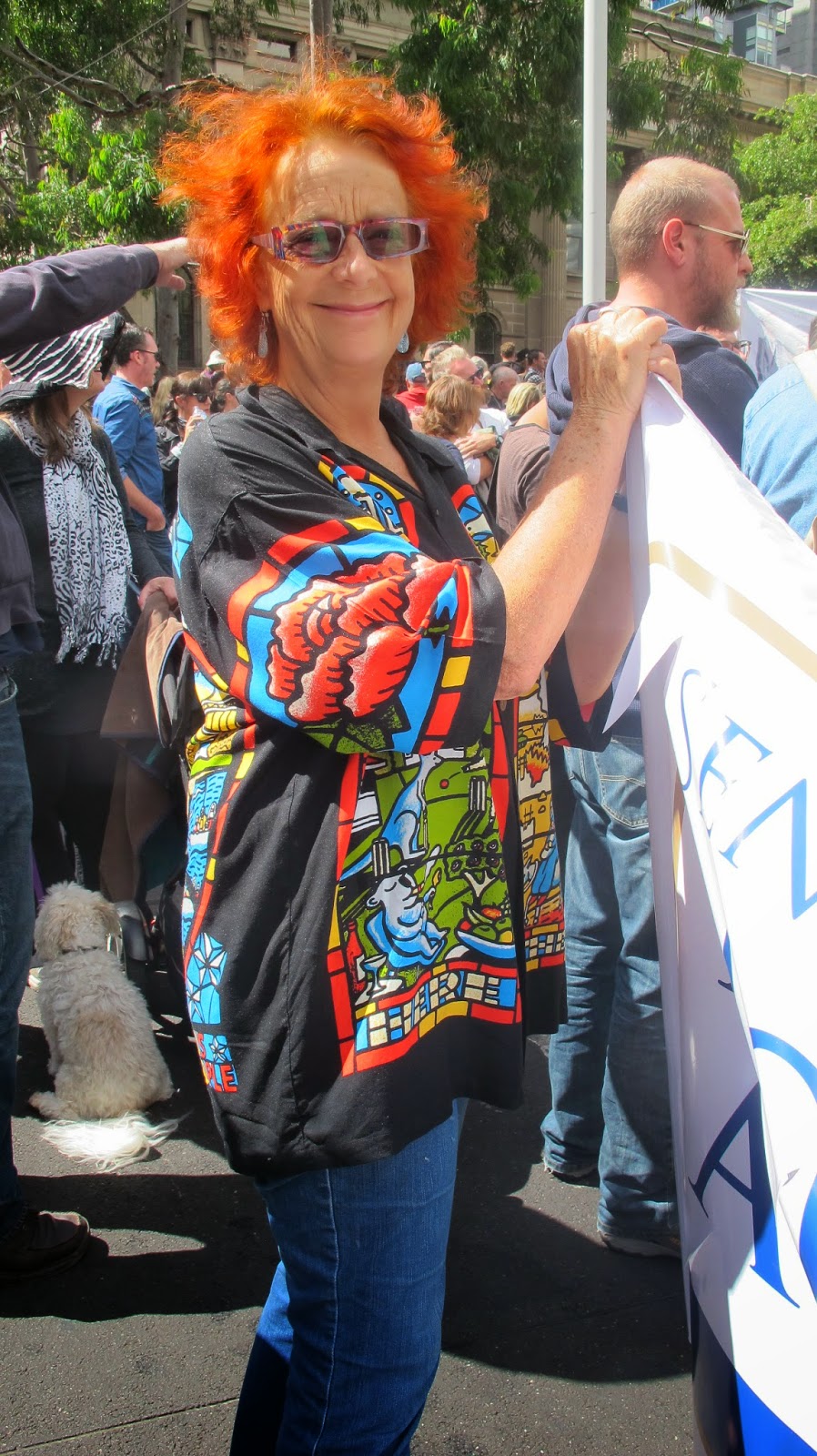 Throughout the day, it became clear to me that many are uncomfortable with claiming old as a vital time of life. Another shame haunting so many while I think after three cancers how lucky I am to grow old. In the midst of our desiring a more humane world, we carry with us walls, but for that afternoon, a glorious melding of differences, action once again replacing impotent complaining and exhausting worry. Now we shall see. Right wing arrogance is usually its own undoing, eventually. The question is how much damage is done to people before the snide politicians, so sure of their power privileges, bring themselves down. Abbott true to form, when questioned about the anti- government marches happening all around his country, laughed and said what marches. 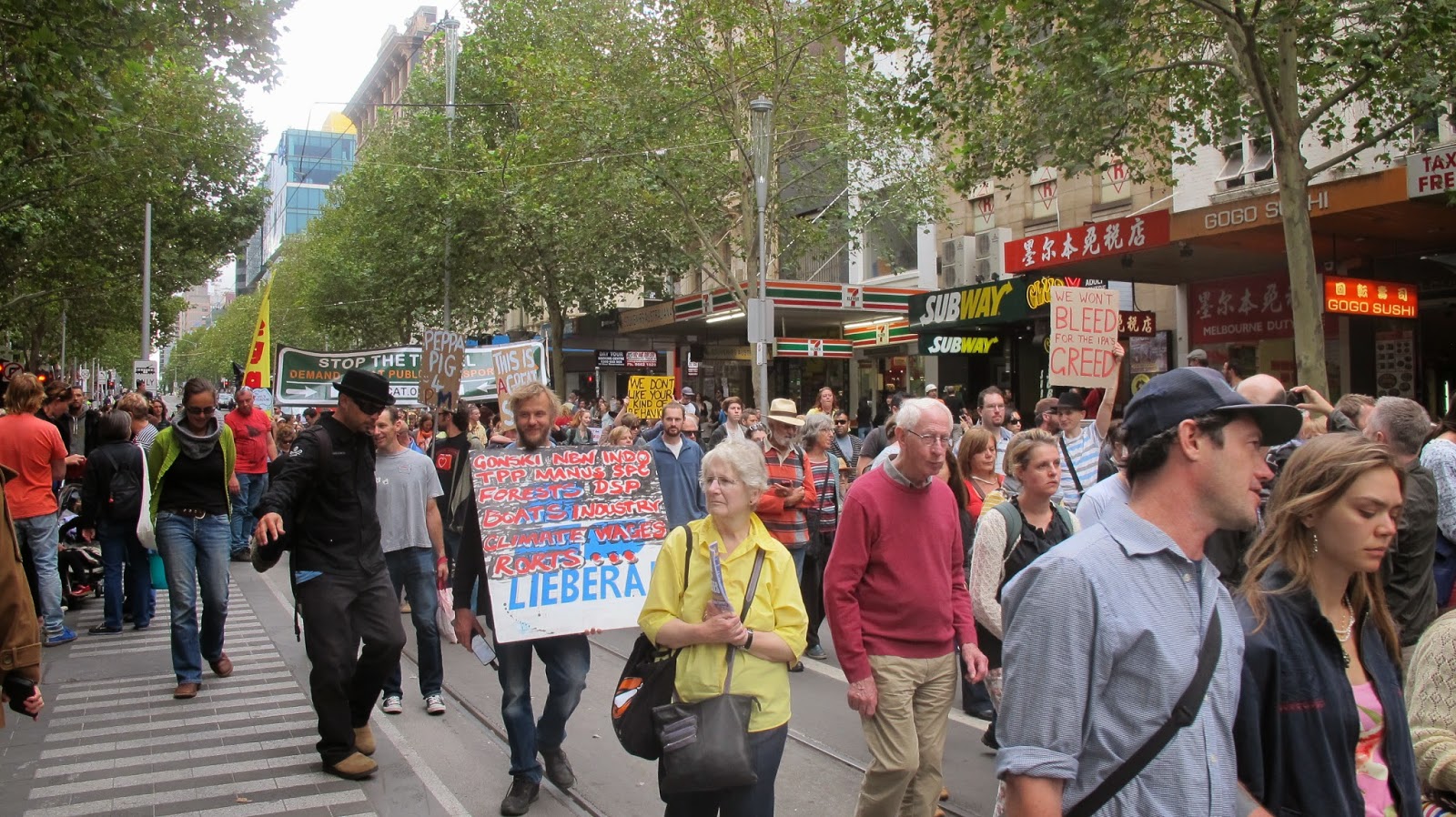 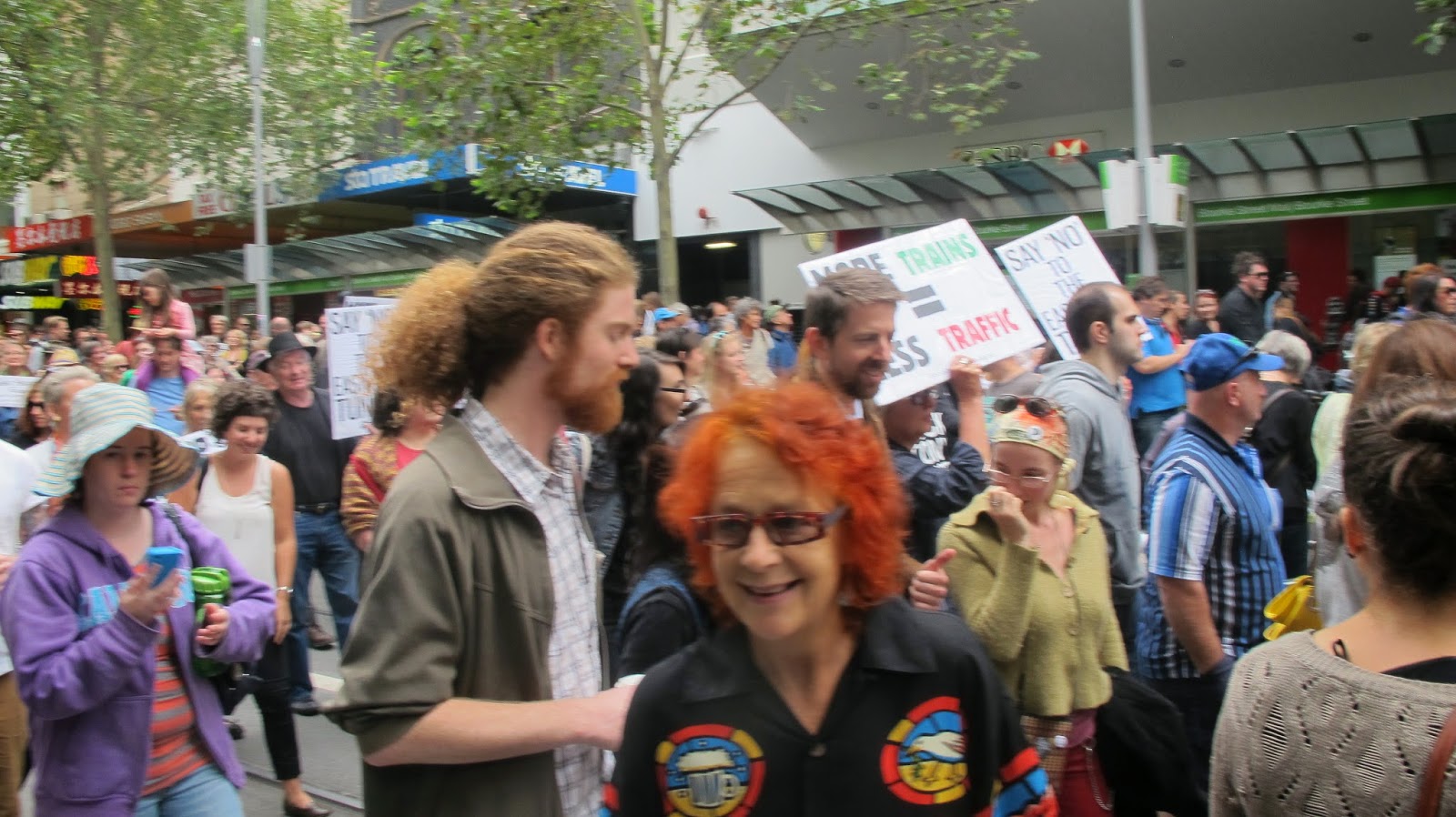