Again the Victory of the Human Heart--Pinchus Goldhar and Family 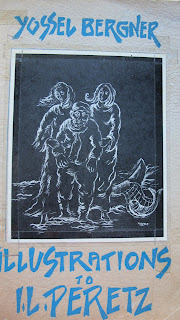 From a small pamphlet in Esther's book collection:

Yossel Bergner
59 Illustrations
to
All the Folk Tales
of
Itzchok Leibush Peretz
Introductions by S. Niger and J.I. Segal
Published by Hertz and Edelstein, Montreal
1950
And then I turned the yellowing page and found in Yiddish and English

Dedicated to the memory of
my Teachers and Friends
from the Jewish Folk Schools in Warsaw,
who were killed in the Ghettos,
Concentration Camps and in the
Resistance.

I remember with deepest reverance
my teacher, the writer P. Goldhar
who died in Melbourne, 1947.

My warmest gratitude to my friends, the poet
Yossel Birazstein and George Skurnik
for their untiring help. 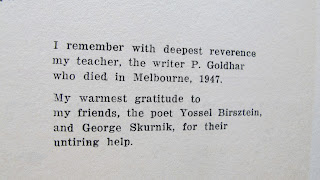 Now I prepare my last package of Pinchus' archives to send home to his grandson, Philip.


I want to tell you of my continuing journey with the work of Pinchus Goldhar and the wonders life has brought me, to all of us who fear that the human heart is a small place. When I first wrote of how Victor, my neighbor from across the street, had brought me the papers of Pinchus, I also worried out loud about what the reaction of the family would be to discovering that I was using archival skills developed as I worked on the Lesbian Herstory Archives for so many years. ( See journal entry of December, 13, 2012.) This was my own legacy of shame from having come out in the American late 1950s. But Philip Rosenbaum, the grandson of Pinchus, son of Esther and nephew of Josh, proved me so wrong. I did not want to leave one moment of doubt. Now in in my heart's mind, I can see Philip walking his dog Jazz down my old favorite streets, a young man who like me shares a knowledge and love for both Melbourne and New York. We keep sending each other moments from Pinchus' life--the last, I suspect, came to me from Philip in New York, faxed pages of Pinchus' Australian passport that allowed him to return to Poland for a short while in 1932. Countries for which this passport is valid: British Empire, Egypt, France, Italy, Germany, Poland and Palestine

The history of movement so marked by collapse of loved cultures in Pinchus' times for Yiddish speakers and so many others--the stamps of passage and of loss, the permits of acceptance or the exile of refusals. Today in this country, Australia, I mean, camps inter those who come without these marked pages, who come with other certificates of suffering, marked on their skin by their search for safety, for future. 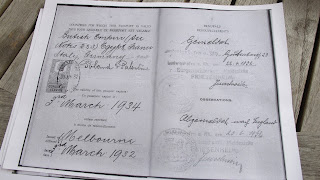 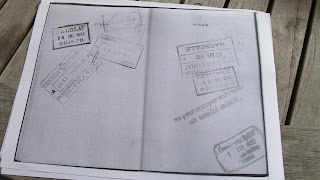 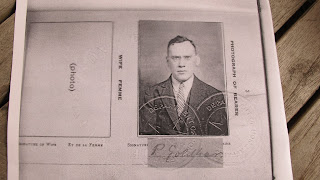 Now my desk is emptied of the papers, the Yiddish books, the manuscripts, the newspaper articles mourning the loss of the father of Yiddish literature in Australia, all have been returned home to the children of his children. My last moments with the artifacts of Pinchus' life were Yossel Bergner's 59 illustrations for the Yiddish folk tales of I.L. Peretz. Late into the night, I sat turning the folio pages, reading the excerpts from the tales that Bergner had chosen to illustrate, seeing, almost touching the souls of his shetl people, who could take flight at a moment's breath, escorted by gentle Yiddish angels to a place where flames shone as ever lasting stars and the work of survival dropped like last year' leaves. 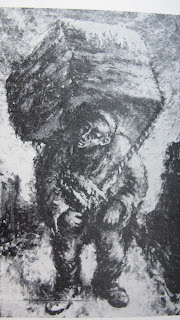 #6  "If not for the human tumult in the streets, someone would occasionally have heard how Bontche's spine cracked under the weight of his burden." Words by Peretz, image by Yossel Bergner

It is hard to say good-by, to all I have met here--Noel Counihan, "artist and revolutionary," who locked himself in a cage on Sydney Road to protest the treatment of workers in the 1930s, who illustrated Pinchus' works; Judah Waten, novelist of the left, son of Odessa, family friend and co-adventurer, bohemians all: Yossel Bergner, who sends tea pots flying, who paints with the tears of a lost people, to a time and a place somewhere between Lodtz and Melbourne where a man who worked as a dyer drew in the red dark waters of his trade, the calligraphy of Yiddish letters. 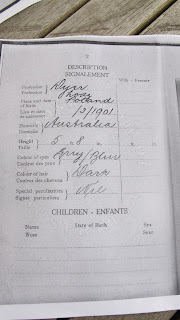 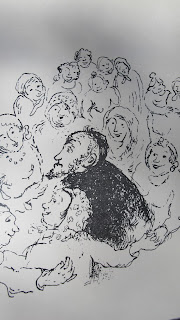 
"Bontche The Silent says to God who wants to give him all the rewards of heaven: 'Well, if so--smiles Bontche--every morning I want a hot roll with fresh butter."

Dear Joan - I would be most honored. What a beautiful idea. I can't wait to see the piece on your journal. God sent you into our lives and I hope you might feel the same. You have given me an even more profound appreciation of my grandfather's legacy. I may never quite fully understand it in a complete way but I know how deep it is. I just realized I have not sent you this film I made with the help of a local Melbourne man a few years ago. It was the best we could do in a week's time but I think it conveys my sense of desire to know more. Yes, please use the passport pages and if there's any other document you would like me to scan, I would be honored.. . Here's the little movie I made  a while back. Have you been to Goldhar Place (the little lan just off Lygon Street?).

All the best,
Philip
http://www.youtube.com/watch?v=YZ3RlHuwj7Q 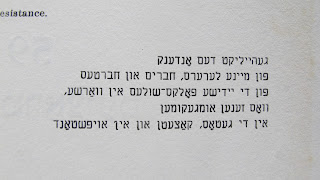 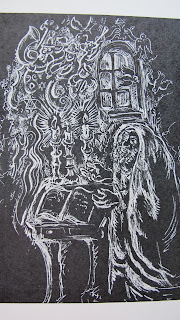