Two Lesbian Sites of Remembrance in the Early 1980s 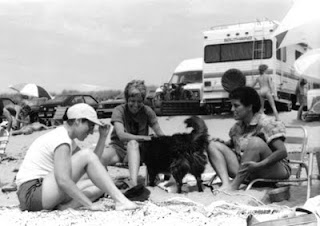 The sweetness of the archives. Here, a lesbian summer afternoon in P'town, Massachusetts, four friends smiling, leaning into each other on the beach of Herring Cove one day in the early 1980s. Deborah Edel, Naomi H. and Paula Grant with Naomi's beloved dog Lulu and me behind the camera. Paula so kindly sent me this moment, discovered as she was scanning her photos to preserve them. The quiet image speaks so to me of joy, of bodies still whole, of love and friendships that enabled love, the sand and the sea and the sun, the ancient sites of gatherings. I think of the hefty novels written by men of note of their gay youths, of their adventures in the street that the whole world should know of, of Proust and Edmund White, of Kerouac and Ginsberg, the chronicles of male communities taking their place in the literary sun which shines so plentiful on their wanderings, yes, yes, but here I offer you this lesbian moment of the last century where it now looks as if all stood still, to allow me to capture for you now, for me now, a different body, the pure joy of hands and toes deep in warm sands, while we talked of such things as lesbian archives, where we just laughed at our own communities of persistence. Remembrance, remembrance, your gift of another time in this time helps me live. We were happy, not for always, but at this tender moment. I feel in the enormity of age now, of my body's travails, that I still have the strength to embrace my friends and lift them high, Deborah's bent knees, her so familiar bowed head, her cap, Naomi, reaching toward her Lulu, Paula so beautiful and so attentive, and lift them above the ebb and flow of time, an offering to the sun--women doing the unallowed, the judged, the perverse and laughing, loving, so. 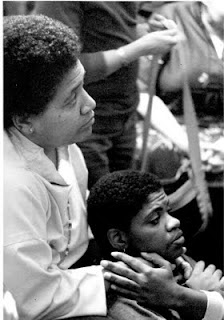 Here Paula Grant has captured a moment in the life of the Lesbian Herstory Archives in the early 1980s when it lived in apartment 13A at 215, West 92nd street in New York, during one of our At Home events, where lesbian cultural workers presented their work. The hands of the great poet and activist, Audre Lorde, embrace the younger poet, Andrea C., as they listen intently to the work of another woman.  Paula, as a member of the archives collective, had to stand aside to allow crowd to take over the apartment, but she always had her camera, knowing the wonder of what we were all doing-- readers, listeners, archives volunteers --in that so public private space where lesbians found a home for their imaginings, where touch gave strength for so much more.
Posted by Joan Nestle at 2:07 AM