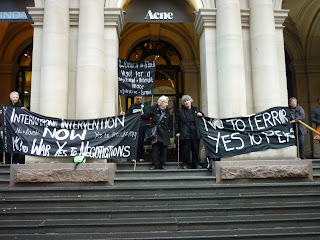 We stand in the cold rain, Sandra, Esme, Geraldine, Hellen, Alex and I, in Melbourne on these worn steps, protesting Israel's occupation and the use of terror to subdue citizens
while across the globe, Israelis of all backgrounds, set up their tents in the heat of summer, in the heat of conviction that social justice issues must be on their national agenda, not just walls and armies and public relations campaigns. A relative of a dear friend of mine from my old building on Broadway in New York, writes on August 2: Batsheva writes: Tens of thousands of young people--marching in the streets, calling for change--calling for social justice and a welfare state--we hadn't seen anything like that since Sabra and Shatila in 1982. This protest which began barely two weeks ago when a young woman named Daphne Leef put up a tent at the edge of Rothschild Blvd near the Habima Theater and sent out a Facebook message calling on friends to join her--has grown into a very powerful, nation-wide phenomenon...
I have never seen anything like what I saw there. Tent after tent, stretching on both sides of the Blvd., from Habima Square and almost reaching Allenby Street, endless signs, a free first aid center provided by Rabbis for Human Rights, free clothing for the taking, art courses, yoga, free food and water, signs against Bibi and the tycoons, young individuals, couples, families camping out, tents where writers tell stories to children, music everywhere, lectures, a "Revolutionary Theater" which shows Michale Moore's "Capitalism--A Love Story" every night...This really is a revolt of the young, the highly educated middle class which if it sounds familiar is the same profile as the core of the protesters in Tahrir Square in Cairo..the Arab Spring and what is happening in the sweltering summer heat of Tel Aviv. 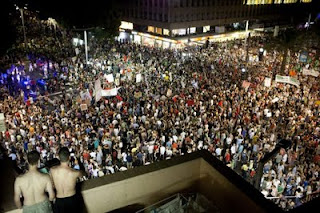 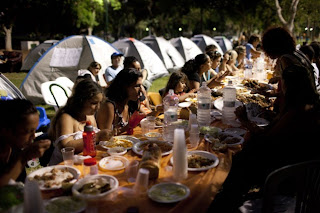 Another voice from the tent city, Abir Kopty writing on August 6, 2011: If you are Palestinian, it will be difficult to identify with Tel Aviv's tent city on Rothschild Blvd until you reach Tent 1948...Tent 1948's main message is that social justice should be for all. It brings together Jewish and Palestinian citizens who believe in shared sovereignty in the state for all its citizens...The existence of Tent 1948 in the encampment constitutes a challenge to people taking part in the July 14 movement. In the first few days, the tent was attacked by a group of right wing activists, who beat activists in the tent and broke down the Palestinian flag of the tent. Some of the leaders of the July 14 movement have said clearly that raising core issues related to the Palestinian community in Israel or the occupation will make the struggle 'loose momentum." They often said the struggle is social, not political, as if there was a difference...Yet on has to admit, something is happening, Israelis are awakening. There is a process: people are coming together, discussing issues. The General Assembly of the encampment decided on Friday that it will not accept any racist messages among its participants. Even to Tent 1948 many Israelis arrived, read the flyers, listened to what tent 1948 represented and discussed calmly. Perhaps if I was a Jewish Israeli I would be proud of the July 14th movement. But I am not a Jew, not a Zionist, I am Palestinian. 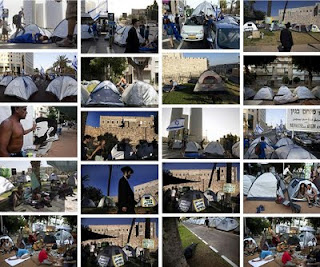 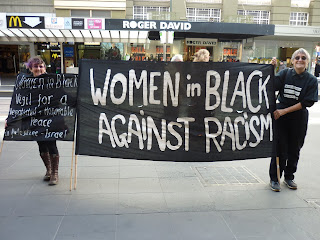 From the plazas of Spain, through Tahrir Square to the Boulevards of Tel Aviv, and all the brave places in between, in the heat and in the cold, people are history makers, society changers, shape shifters of huge proportions even in the face of tanks and bullets, smashed homes and police arms bulging with the muscles of the state around their necks, the kicks of armored boots tearing into their sides--what will be left standing we do not know--already the Israeli police have dismantled the tents in the poorest parts of Tel Aviv, where migrant workers live and single mothers--the less nationally valued lives--but chants are rising above walls, above boundaries, above preached hatreds, "We're Not Puppets of Our Government," "The Workers are Worth More," "Mubarak, Assad, Netanyahu Must Go," "Tahrir is Here," "We Want a Revolution, We Want Hope." I know that societies often run in fear of their own courage, but we have seen people talking, making the streets their universities, their newspapers, their UNs. It is in all our hands now, as it was in America on the march from Selma to Montgomery or on the brutal steps of segregated high schools or in front of padlocked voting centers--the people who knew what it was to live lives that their own nation never saw kept coming. Here  I am, at 71, seeing the hope coming slowly over the horizons of our changing times. 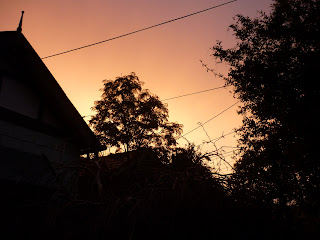