Thursdays with Ms Ruby and Other Moments That Give Hope


I move through these days with a constant storm of hateful speech, killing virilities, pandering politics at my back. What is happening in my country of origin? Distance makes me a trapped viewer of CNN and I reel from one sad collapse of public discourses to another. I say to my friends here,  how did we get from Adali Stevenson to Donald Trump, how did we go from Edward R. Murrow to Fox News? Mostly the past names have no resonance here; Australians have their own falling from past graces to worry about, but this is what happens with aging, the nouns that live on are living photographs of those who made a difference in your own public journeys, who gave insight into what we could say to each other when we were concerned with balanced, probing actions and words.

Knowing I wanted to stay in touch with all of you in this dismal time, I sat down to write and find images from our days here. Then Ms. Ruby's lovely face looked up at me, holding up  one of the essays she was reading for her International Relations class as we gathered for our weekly shared meal. The simple beauty of her, the long journey she has undertaken with minimal support, the way we all found each other, the care we are committed to, the gift of her presence overwhelmed all the ugliness Trump had thrown into the air. Here on little Fitzgibbon Avenue we found the caring human way again. And Ms. Ruby even liked my eggplant involtini cooked especially for her from my first ever vegetarian cookbook. The 75 year old marked here by her glasses learns always from the questing young.

My anchor, my comrade, my love, here in a quiet time, with her pruning clippers used to encourage her beloved gardens. How she holds me so I can make my way in her world, how she teaches and writes and encourages and loves. 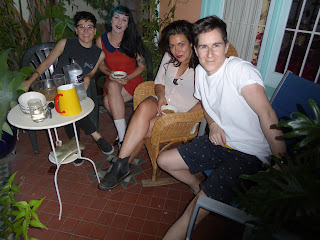 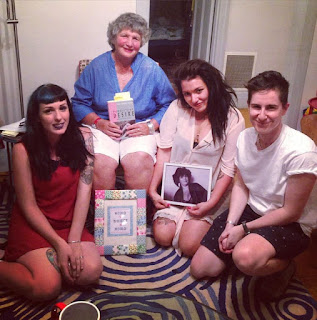 A visitation from Maddy, Natalie, Jamie and Esther, a new generation of fem-butch women, on the eve of the launching of Esther's new zine, "Butch Is Not a Dirty Word" on our front veranda in the late afternoon. I have told Maddy that this event to be held in Hares and Hyenas bookstore will be my last public outing and how fitting it was to stand before over 200 members of the butch-fem community and take my leave, almost where I started over 50 years ago. 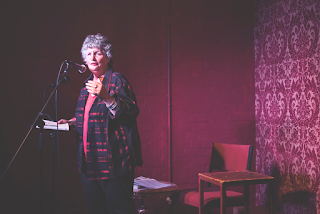 From my notes for the evening:

I acknowledge the Wurunjerri people on whose lands we stand, having the privilege of discussing our identities.

Thank you, Maddy, Esther, Jamie and Natalie for letting me part of this launch and coming to talk on the front porch abut fem-butch desire, politics, lonelinesses and exhaltations the other night. oh what sounds we poured into the sultry night air. How lucky Iwas at 75 to be once again in another age and place with a community much like the one that given me lesbian life over 50 years ago. 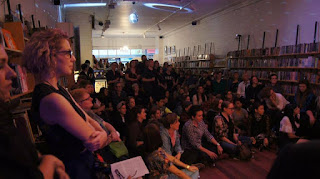 My own words of appreciation for the butch touch, the competencies, the tender power, the tough power, the stance, the taking on of societal judgement--butch, a complex gender intermingling, a living erotic marked by surrounding histories--I tell of the couple described by William Cullen Bryant in a 1843 letter to the Keene, New Hampshire Evening Post of his visit to the home of "two maiden ladies who dwell in the valley as companions for life...I could tell you," he continues to write," how they slept on the same pillow and had a common purse, and adopted each other's relations, and how one of them, more enterprising and spirited in her temper then the other, might be said to represent the male head of the family, and took upon herself their transactions withe world without, until her health failed, and she was tended by her gentle companion, as a fond wife attends her invalid husband. I would tell you of their dwelling encircled with roses..but I fear I have said too much already." We live our desires in history. I tell of how the American butch-fem community risked all to bring a public gay world into being: The voice of a working class butch lesbian of the 1950s Buffalo, New York community, remembering in 1993.
"Things back then were terrible, and I think because I fought like a man to survive, I made is somehow easier for the kids coming out today. I did their fighting for them. I'm not a rich person. I don't have a lot of money, I don't even have a little money. I would have nothing to leave nobody in this world, but I have that I can leave to the kids who are coming out now, who will come out in the future, that I left them a better place to come out into. And that's all I have to offer, to leave them. But I wouldn't deny it;even though I was getting my brains beaten up, I would never stand up and say, 'No, don't hit me, I'm not gay, I'm not gay. I wouldn't do that."

My closing words: We are at a time when claiming gender territory seems very important--I want to suggest that in a way we are absorbing into our communal conversations the territorial tensions that form the language of the States around us. There is room in our communities for all our gender, sexual, identity expressions, no need to patrol the borders. What we do need to do in this time of growing Facism--I refer to Trump--is to say what needs to be said to each other about the complexity of all our identities, to listen and learn and replace shame and invisibility with appreciation and acknowledgement and then to find ways to form a united front, body with body, against the rising Right-- using all our knowledges--lesbian feminist, intersexed, gay, dyke, queer, butch, fem, transgendered, no gendered, bisexual--let us link our differently history-touched arms and say No to nationally dictated hatreds, no to relentless incarcerations of those declared unwanted. 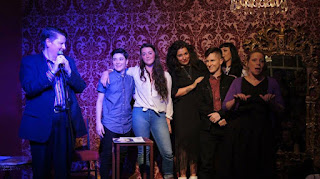 And my last moment of hope came to me as a Jew who watched all the worst speak in front of  Americans for Israel Lobby Group, saying everything they thought their audience wanted to hear, gentile voices pledging their undying love for the Jewish state, with Trump verbally holding up  his imagined Jewish baby like a biblical sacrifice for the Jewish vote. I thought of the terror, the abhorrence, if we just put the word Christian in place of Jewish. How have we come to this, my people. The terrible mix of Holocaust pain and fear mixing with headiness of National Power over another people has made us loose our senses and our hearts. And then, and then, the only Jew in the race, Bernie Sanders, turning his back on the Washington venue and its racist hate fest posing as a loving embrace of the Jewish people while demonizing the Palestinians, our Bernie with the oh so Jewish name, says, after criticizing Hamas' violence, "However, let me also be very clear: I--along with many supporters of Israel--spoke out strongly against the Israeli counter attacks that killed nearly 1,500 civilians and wounded thousands more. I condemn the bombing of hospitals, schools and refugee camps. Today Gaza is still largely in ruins. The international community must come together to help Gaza recover. That doesn't mean rebuilding factories that produce bombs and missiles--but it does mean rebuilding schools, homes and hospitals that are vital to the future of the Palestinian people. These are difficult subjects. They are hard to talk about both for Americans and for Israelis. I recognize that, but it is clear to me that path toward peace will require tapping into our shared humanity to make hard but just decisions."

Doing the hard thing, whether it be 18- year- old Ruby stepping out into a world of ideas that she has never known, or butch women rejecting shame or saying the words that mark you as traitor because you see more pain then just your own --or giving your heart in full love in the face of  mortality--the wind sings with these possibilities. 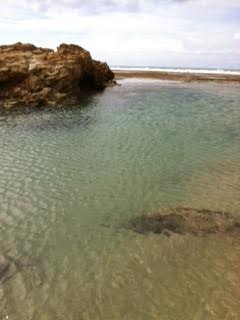