After Seeing "Son of Saul"--The Naqba and the Holocaust, the Madness of Racial and National Intoxications 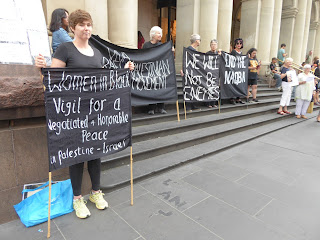 Last night I saw "Son of Saul" and more then ever, I wept in the darkness for the immeasurable human catastrophe unchecked national and racial hatred brings into being, more than ever I saw Palestinian bodies along side Jewish ones--more than ever I saw the Naqba and the Holocaust as huge shared histories, more than ever the need to understand each other's losses and each other's rages but now Israel holds the guns, builds the walls, garnishes the millions, builds its armies ever stronger, every day destroying possibilities of doing something truly life giving with these two legacies of despair and resistance. Please you do not need to agree with me in all things, but what ever daily action you can take, from having a conversation to not buying a settlers' product to not traveling to Israel on a pleasure trip and if you do, please make some kind of effort to touch, to look, to stand and witness across the walls, the checkpoints, the settlements stretching further and further into another people's last hope.

A full-page color ad calling on Oscar nominees to #SkipTheTrip being offered by the Israeli government in swag bags was published in the Calendars section of today’s Los Angeles Times. The ad, which is sponsored by Jewish Voice for Peace (JVP) and the US Campaign to End the Israeli Occupation, urges nominees not to endorse Israeli apartheid by participating in a government-sponsored junket. The same admade waves this week after Variety declined to publish it at the last-minute, despite previously publishing a politically-charged ad criticizing the Obama administration for its Israel policies.

“We’re glad the LA Times is running our ad. Censorship has no place in a serious publication, whether in ads or editorial content,” said Rebecca Vilkomerson, executive director of JVP.  “We know that when people have access to information about Israeli policies and their impacts on Palestinian lives, they are more willing to speak out for justice. This is a small and important step toward that goal.”
After initially accepting payment from JVP last week, Variety informed the organization that it was unable to publish the advertisement because “it would need to have a softer tone.” Following an inquiry about specific edits that could be made, Variety’s Director of Strategic Partnerships Patrice Atiee elaborated that: “The topic is too sensitive at this time and we will not be in a position to add it to next week’s edition.”
The ad is part of an ongoing campaign urging Oscar nominees to #SkipTheTrip being offered by the Israeli government in swag bags distributed by Distinctive Assets, a Los Angeles-based marketing company. As Variety itself reported last week, The Academy of Motion Picture Arts and Sciences is suing Distinctive Assets for copyright infringement after it marketed its swag bags with slogans such as “Everyone Wins at the Oscars! Nominee Gift Bags.” At $55,000, the 10-day luxury trip to Israel is the priciest item in the bag. Other freebies include a “Vampire Breast Lift,” a vaporizer, and a sex-toy, among other things. The bags are going to nominees in the best actor/actress, best supporting actor/actress, and director categories. Host Chris Rock is also set to receive one.
Getting celebrities to come to Israel is part of a “Brand Israel” strategy by the government to improve the country’s image abroad in the face of growing boycott, divestment, and sanctions campaigns (BDS) that challenge Israel’s military occupation and apartheid policies towards Palestinians.
“As was the case many years ago in South Africa, celebrities are being asked to refrain from whitewashing apartheid policies,” said Yousef Munayyer, executive director of the US Campaign to End the Israeli Occupation. “By refusing to be used as props in the Israeli government’s perpetual occupation production, they are protecting their own reputations and standing for freedom, justice, and equality. Israel’s casting call for apartheid lackeys is one any actor or actress with a conscience should not hesitate to turn down.”
2016 Oscar nominees Mark Rylance and Asif Kapadia have already pledged not to visit Israel professionally as long as the human rights violations persist. Last week, five-time Oscar nominee Mike Leigh, director Ken Loach and musician Brian Eno publicly denounced the Israeli government’s propaganda initiative, which is being promoted by Israeli Tourism Minister Yariv Levin, a vocal proponent of Israel’s illegal settlement project who opposes the creation of a Palestinian state.
A petition launched last week urging nominees to follow the lead of celebrities like Ms. Lauryn Hill, Danny Glover, Stevie Wonder, Elvis Costello, Angela Davis, and others who have refused to lend their names to Israel’s past propaganda attempts already has nearly 10,000 signatures.
The Palestinian Performing Arts Network, which represents the majority of the Palestinian cultural sector, is also calling on Oscar nominees to #SkipTheTrip, and the Palestinian BDS (Boycotts, Divestment and Sanctions) National Committee, the broadest Palestinian civil society coalition, welcomed the Academy’s moves to distance itself from the swag bags.
###
Jewish Voice for Peace is a national organization inspired by Jewish tradition to work for the freedom, equality, and dignity of all the people of Israel and Palestine. JVP is one of the fastest growing Jewish organizations in the US, with more than 60 chapters and 200,000 members and supporters.
The US Campaign to End the Israeli Occupation is a coalition of hundreds of US organizations working to end all forms of US support for Israel’s occupation and apartheid policies. We support freedom, justice, and equality for all.
Posted by Joan Nestle at 3:41 PM