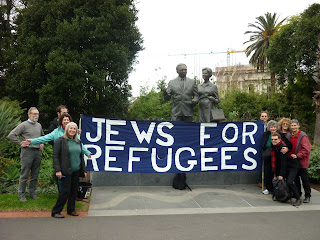 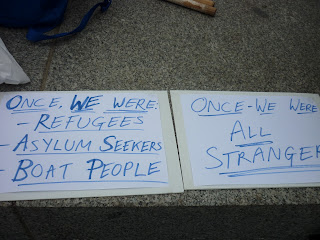 Before La Professoressa and I once again take Cello to his foster family in Spottswood who so generously expand their Skippergee family to include the male with a tail, thank you, Jane and Ann, preparing for our departure to Oxford where the red-head will be teaching a five week seminar on Gender, Sexuality and Human Rights and I will walk the Oxford canals, thinking, thinking--a little of the happenings here. Turns of the earth, literally, an earthquake that prompted Cello to flee out the door, that caused La Proessoressa to life her head from the student dissertion she was reading, and inquire, Darling, I think the earth just moved. Just a reminder that all the drama of our human ways is acted on the outer skin of a living creature. Here on this ancient continent, the below feels very close. 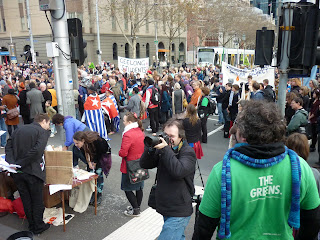 Detention for asylum seekers, many of whom reach these shores on ocean drenched wooden boats, is a growing issue here as hundreds continue to lose their lives in the oceans between Indonesia and Australia's so poorly named Christmas Island; for the survivors, their gifted new home is a barbed wire camp. Max, who works with the Australian Jewish Democratic Society (AJDS) resurrected an old group here, Jews for Refugees, and so we gathered under the old banner, sadly, another generation protesting the same inhuman conditions of war-torn refugees. While I stood listening to the speakers, I thought of the men, women and children fleeing through the deserts of America's South West, the right wing campaign to build more walls, shoot more bullets, arrest more suspected "Others," the administrative detention policies of the Israeli government and in so many other countries, where those in disfavor, those who ask the wrong questions, those who put unarmed bodies before their to be destroyed homes, end up for months, perhaps years, without defense or charges. We were all strangers once, said the small sign. Many, many of the Jews who have called Melbourne home since the 1930s and 40s came on refugee boats, fleeing for their lives to a country they did not chose but was the one who would take them in. Now I have walked for peace, against detention, for Aboriginal rights, against war and occupation in these Melbourne streets that at these times seem like a continuation of the street I and so many others started walking when we protested the Vietnam War, the street that stretched over the George Washington Bridge, kept going to the Pentagon, took us down to Selma and back in time for the Gay pride marches and back to Washington time after time for Women's Reproductive Rights, Against Poverty, Against American Transgressions in Central America, one long street of comrades saying, there has to be another way, through the decades and still, yet while there is breath and a hip that pushes through... 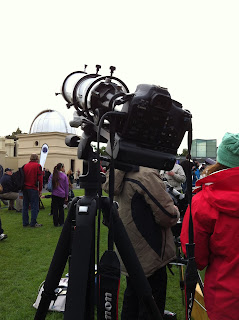 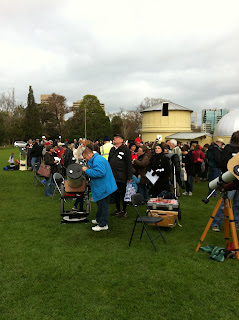 A gray morning in the Royal Botanical Gardens where we La Professoressa, Cello and I joined the amateur astronomers who had set up their telescopes so mere mortals like us could for the briefest of seconds see that little black dot of a planet make its way before the fiery disc of our sun. And we saw! We saw! Again like the earthquake, the largest of things was for the briefest of times revealed to us. 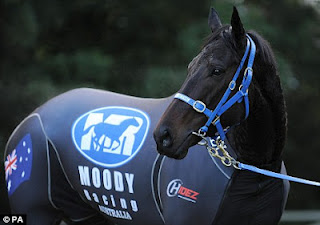 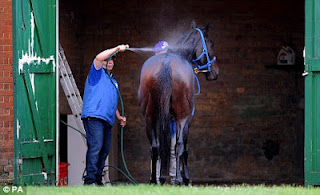 Speaking of black dots, my beloved Black Caviar, the mare who is called a freak by the small minded sports writers here who only think in two genders carried her black dots on a salmon background to the land of the colonizer and though bruised, crossed the finished line by a nose, the beauty of a mare who has never lossed a race, those silly things, the people around her, push and pull her into spandex body suits and through ringing gates, making fun of her strength all the time--her rump is too big to be beautiful they say. Dear Black Caviar, for big rumped lesbians everywhere, I send words of appreciation and know you escape all the indignities in the largeness of your own dreamed of Victorian hills with your billy goat pal and that dear old pony, both friends of so many years, by your side. You have thrilled this Bronx girl.

All of it, in the skies, on the oceans, in the streets, all of my life here will now be left for a while, but before I go, I want to post a letter to my own past.