Yesterday, I stood mid morning in the worn bus station looking up at the black windows of the large commuter bus that was carrying our friend Karin back to London so she could catch her plane on to Copenhagen. We had adventured together, the three of us, continuing our pledge to somehow be in each other's company at least every two years--with all of Europe and the Pacific endless sea between us. I know some time this pledge will be broken, but for these five days, it held. 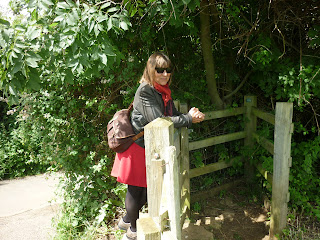 Karin in a Cottswaldian moment, 2012

My friendship with Karin began when she made her way to 13A to work at the Lesbian Herstory Archives in 1982; New York City so beloved by Karin was usually the backdrop for our friendship with our traditional shopping trips to Chinatown for gold leaf papers, to the side streets of mid town so Karin could wonder into fabric and novelty stores, looking for material for her home made clothes and in the beginning I would wait for her to come home from her beloved operas and her beloved singer, Tatanya, for whom she waited like a stage door Johnny with a single red rose.  Now La Professoressa is part of this girl gang, the two academics chatting away as I shepherd them through the throngs of Broadway, Copenhagen, Melbourne, London and now Oxford.

These days we spent wandering through the narrow Oxford streets, where the difference in our physical abilities became clear, and soon I would give Karin the go ahead, we will met again back on Rewely Road. One day, we took a bus to Blenheim Palace, oh do I know what it is to be a commmoner now--a huge edifice dating unchanged from the 1700s, with grounds that are states, with lakes and waterfalls--and an 84 year old Duke and his fourth wife living behind closed doors in the East wing while we the public contributed to the upkeep of his massive inheritance. We began the tour of the red, green and writing rooms with their huge tapestries in smaller rooms filled with an exhibit on the life of Winston Churchill who was born here. I found myself overcome when his taped voice spoke those words that had held a nation together, all his privilege became something else when he promised no surrender to the Nazi forces. How sentimental I become in a place so antagonistic to all I know of class life. One small note next to a picture of a cute long curled boy said in neat typed words, Winston loved riding his ponies over the green fields of Blenheim, his home. Of course the world was his to save.

In the warming evenings, the three of us would take off in our hired car to out of Oxford pubs like The Trout along the rushing Ises, where we sat in the bar and ate our dinner under a low wooden roof, talking, talking, taking in as well the sheer beauty of our setting, the sun glinting off the greens of the Port Meadow. Three women, now two starting their 6th decade, and one in her 7th, still discovering things about why we are the women we are, still wondering how our life travels had brought us all together again. Another night found us in Burford, a stone 18th century town, typical of the Cottswolds, eating in the Golden Pheasant, but the most eccentric evening meal was had at the Black Prince, with its all dogs welcome sign, the Prince's suit of armor along side the fire place, the bar fronted by several older men with their working dogs and in the garden, a group of younger,strong armed men throwing thick pegs at a target attached to a pole, Knocking off Aunt Sally's Head, was the name of the game we were told by a good natured round faced man with thick glasses, a favorite pastime of Oxfordshire, not knowing he was speaking to three feminists from three different countries. And always, the river flowing past the wooden tables, the wild flowers growing rich, the hedge rows, a peaceful beauty. 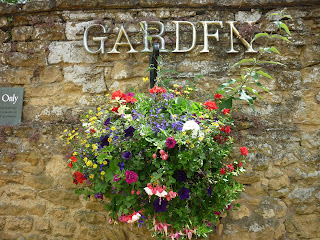 We finished our time together with a two day trip through the Northern Cottswolds, through the stone towns with their purple, red flowered baskets setting of the richness of the gray stone and then through the breaks in the hedges, those rolling green hills, those straight lined trees--we all had a different name for them, I called them yew, La Professoressa said laurel, Karin said poplar--marking boundaries, the sheep white moments of peace in the green and those little wooden signs along the old stys, announcing the wonders of public footpaths. How I wished we had more time to just get out and take off into those lush perspectives, walking we were told all the way to Bath if we so wished. At every pub, we saw groups of young men and women wearing thick socks and heavy soled walking boots, taking in sustenance before they stepped out again. Stow-on-the Wold, Chipping Camden, Ebbington, Shipston-on-Stour--Karin begged for cream tea stops, we spent the night in small stepped, low roofed old hotel, with creaking floors and drapped beds and always we talked, talked of events, of aging, of ideas and loves. Beautiful it all was--and the green vistas of rolling fields I will take with me--and then back home, a home for now, I say good-bye to my old friend, humbled by the thought I might not see Karin again in her wonderful body. I have her laugh, her cool and loving looks, her calm acceptness of life's complexities, and those times when she looks me straight in the eye and tells me where I need to think more carefully. An honest, brave woman who claims with great penache the category of spinister, giving it more self reliant and loving life, more glamour and physical joy then ever imagined.

In the hours after Karin's leaving, I sit in the coolness of our home here and read Zadie Smith's article, "North West London Blues," published in this month's New York Review of Books and gain a deeper focus on the world in which we now reside. Smith tells of a community's need for their local gathering places like the weekend market square, Willesden Green, in her mother's neighborhood of London and of the community library, a run down 1894 turreted building which gives so much focus to the neighborhood, which makes so many kinds of gatherings and knowledges possible, but because of greed, once again, not of the poor but those who already have so much, the library and an essential bookshop are planned to be demolished to make way for luxury housing. Smith writes, "minimal consultation, bully-boy tactics, secrecy, outright deceit" are the hall marks of how this decision and so many others are enforced on the economically powerless. The state, she goes on to say, "is complicit in this new, shared, global reality in which states deregulate to privatize gain and reregulate to nationalize loss." In disbelief, writing from her teaching time in New York, she writes, "I can't tell whether the news coming out of my home is really as bad as it appears to be, or whether objects perceived from three thousand from three thousands miles away are subject to to exaggerations of size and color. Did a labour-run council really send heavies into Kensal Rise Library, in a dawn raid, to strip the place of books and Mark Twain's wall plaque?" I continue reading, thinking how she has gotten it all so right, with the green fields of the idyllic Cottswolds still in my mind, and then come these words, "Kensal Rise Library is being closed not because it is unpopular but because it is unprofitable, this despite the fact that the friends of Kensal Rise Library are willing to run their library themselves (if All Souls College, Oxford, which owns the library, will let them) and I sit so still. On all the tour buses that constantly ring the walls of Oxford, we are told of the exclusiveness of All Souls College, off limits to all but the very best, only one or two new members picked every year, Old Souls which represents the pinnacle of Oxford traditions, one of the wealthiest colleges here amidst very wealthy colleges, its gates closed solidly against the passing throngs--and it holds in its cold hands the fate of a gathering place for the workers, the students, the mothers, the children, the tired laborers and aspiring smart young ones without family dynasties behind them, no ponies to ride on ocean wide green lawns, a simple every day library begging to be allowed to serve its community, but the bully boys and the empty eyes of the most powerful College in this stone place have determined otherwise. How even more beautiful then those small market towns on the their rivers would be another kind of heart in Oxford and in all our centers of power.
Posted by Joan Nestle at 1:29 PM