"Quite Simply, We are Afraid of Them...This is Our Bus" 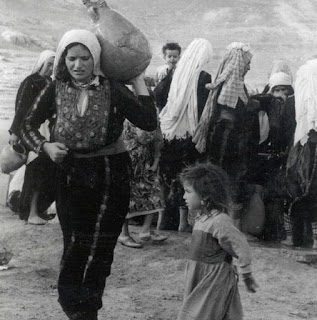 The Expulsion of the Palestinians, 1948 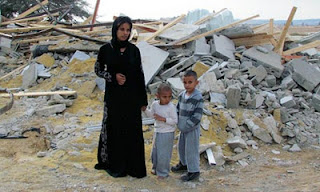 The Expulsion of the Bedouins from the Negev, 2011
I have neatly placed the articles about the latest cruelties visited against the Palestinian population by the Israeli authorities by my computer; every day as they come in, news of the latest insanities of a nation which behaves as a ruthless armed child, a favorite child of the mighty,  on these pieces of stacked sheets. From the newspapers, from Jewish Peace groups, both in American and Israel, and e-mails from my friends in Haifa who have struggled so long for another kind of Israel, the words pour in, the images inescapable. And always I think who am I to think that my words can make a difference, and then I remember that I have eyes that see and a heart that feels, that I have learned never to run from history, one's  own or another's, that it means something if one voice and then another, says I saw, I knew, I said no, no, no.

Tonight as I sat to try to write of all I had in front of me, the final moment of absurdity came: a New York Times article saying how insulted the American Jewish community was by the Israeli ad campaign to woo Israeli expatriates back home. Insulted these groups were by the arrogance and cultural disrespect of America that these ads revealed and behold, "the reaction of American Jewry, a crucial mainstay of support for Israel, clearly caused alarm." A spokesman for Mr Netanyahu said it all: We are very attentive to the sensitives of the American Jewish community...when we understood there was a problem, the prime minister immediately ordered the campaign to be stopped." Here it all is, the power of the "American Jewry" to stop Israel from doing killing things and this is what gets its attention! A slighting of the diaspora. If ever proof was needed that Jews outside of Israel could play a role in humanizing this country, in stopping its brutal intrusions into the lives of more and more of its own dissenting citizens and of the Palestinians who struggle against the daily punishments, exiles, evictions, arrests, trying to hold on until more of the world wakes up, trying to find every way possible to make their hidden-- behind walls and armed- check- points- faces seen--here in an almost comical way we are given all the proof we need. 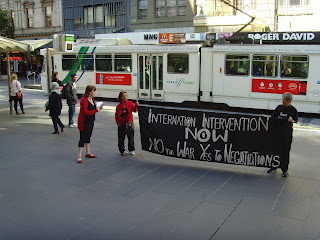 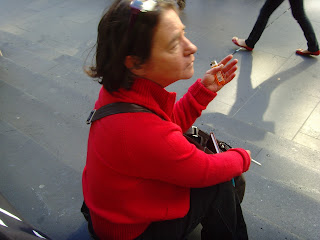 Do you remember Hagit; when she was visiting from Israel she stood with us in our monthly Women in Black vigils here in Melbourne, a small woman works tirelessly for peace in Israel. You have met her in earlier journal entries.
Headline from the Guardian, Nov 9, 2011: Israeli Peace Activist's Home Vandalised with Death Threats and and Swastikas
"Police confirmed they were investigating the attack on the Jerusalem home of Hagit Ofran, who works for Peace Now, an Israeli organisation that monitors settlement activity in the West Bank and East Jerusalem. Ofran said the perpetrators were trying to intimidate activists. 'The discourse in Israel has become truly dangerous," she told Haaretz newspaper. Where is the outrage of the American, Australian "Jewry" at such undemocratic behaviour?

Our letter to Hagit after reading about her ordeal:
Dear Hagit, We want you to know that your sisters from Melbourne's Women in Black are with you and your family in this time of ignorance. We remember your visits with us, standing on those Melbourne steps, the talks over cups of coffee and tea, but even more, we remember the integrity of your positions, the strength and courage of your vision. I wish, for all of us. that we could take this ugliness out of your life, that your dedication to the best of Israel would be seen as the national gift it is. I know I speak for the thousands of women and men who stand in vigil for peace in the Middle East when I say your spirit and passion for a compassionate compromise will always be with us. With love, the women of Women in Black, Melbourne

Thank you!!! dear Joan
I was really moved. Your kind words give me strength. It is not simple but we have no choice if we want a better world to live in.
And each of us has to know we have to do it and not wait that someone else do the job for us.
Love to you all and send kisses from me to everyone.
Hagit


Over 40, 000 Bedouin's are being forcibly removed from their homes by the Israeli Defense Force to make room for settlements as I write this. Where is the outrage of American Jewry.

Or the Guardian article about how Israel refuses to give Palestinians the right to leave Gaza to pursue legal actions against the Israeli military for wrongful actions--where is your outrage, at this nation you so like to call the only democracy in the Middle East. How power is used to protect the powerless is one way we judge the democratic intentions of a nation. Where is your outrage?

Or the disappearing faces of women from public places in Jerusalem as the ultra Orthodox gender cleanse their streets. Where is your outrage?

And when the NYT,  the oh so powerful newspaper, changes history by censoring the word "expulsion" from its description of what happened to millions of Palestinians in 1948 so as not to hurt the feelings of influential people, forgetting the world of human suffering it has just turned its back on. Of course, no outrage.

As part of this so-called American and now Australian Jewry, I call out in outrage at the never ending stupidity, arrogance, ignorance, brutality, racism of these actions, actions and inaction which endanger the whole world for such unquestioning acceptance of another people's suffering, such championing of the brutal wielders of colonial power for that is how Israel treats its occupied territories, will be punished eventually by the larger forces of history. Oh my people, do not turn from the faces of the exiled, the detained, the beaten, the evicted, the humiliated, they once were you. And you know how you yearned for freedom.

And so I read the Israeli woman's statement when she was interviewed riding the segregated bus that refused to carry Palestinians from the West Bank to the entry to Jerusalem, while she watched the IDF soldiers drag the new Freedom Riders from the bus. "We are afraid of them...this is our bus." No sense here; those with all the power, those who abuse this power, think themselves powerless and continue to do all they can to make their world and ours a more brutal place, a more unjust place, a more dangerous place. Outrage is hope.

When will we wake up? Will it be too late?
Posted by Joan Nestle at 3:01 AM