The Books, The Books 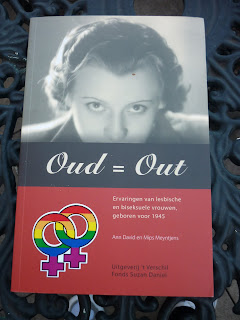 from Belgium, by Ann David and Mips Meyntjens 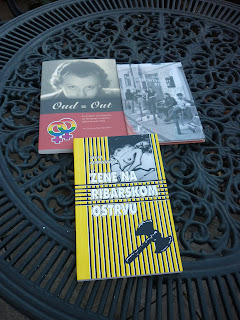 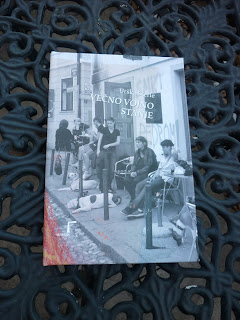 Lesbian Resistances, by Urska Sterle, from Slovenia
At our gatherings in Belgrade, books were given to me, hand to hand, precious handing overs, which I will pass on to the Lesbian Herstory Archives in Booklyn, but first I hold them dear. "Oud=Out" was given to me by Ria as we sat at Lepa's kitchen table, a history of lesbian and bisexual women in Belgium, "Ervaringen van lesbische en bisekuele vrouwen, geborne voor 1945," written by Ann David and Mips Meyntjens. Along with this gift, Ria handed me an envelope filled with the wonderful photographs of Lieve Snellings, another Women in Black comrade from Belgium whose images can be found at http://snellings.telent.be  We ate our pasta, talked of shared pasts, moved our bodies in little dances taught to us by other women at other gatherings for change, and gave gifts of creation.

Another point of exchange was after the large group meeting in the Hotel Majestic: one from the hands of a younger activist from Slovenia, Urska Sterle, and the other, a collection of poems, from the hand of a woman of my age, Stefa Markunova, "Zene Na Ribarskom Ostrvu." After our translated conversation, a young woman sitting on the window ledge in the back of the room, asked is there still room for the lesbian monster in our thinking. We had been talking of the lesbian yearnings for respectability in Western countries--her words brought me back instantly to the middle 70s--to a southern lesbian writer who wrote of the lesbian monster, here I mourn the loss of the archives living in my daily life--I would have been able to find her work, her name, right off the shelves--and now memory escapes me but not the power of her work. I understood what Urska was calling for, I said perhaps it is the work of the artists to keep that space of rebellion, that rich space on the margins where so much can be imagined, alive.After we talked, and she put in my hand her book, "Vecno Vojno Stanje," carefully drawing my attention to the cover image. A group of dykes and their dogs sitting outside their cafe which had been bombed the day before, "You see here," Urska said, "here are the signs of the Molotov cocktail that had been thrown at the club," with the words "Death to Lesbians" scrawled on the wall. "We were back the next day, when this picture was taken, we refused to stay away." Urska is the woman standing by the door. As I looked down at this image and heard her words, I felt a hugeness in me. This was for me one of the most important lesbian images of the last century and of this one so far, the persistence of those bodies considered national deviants, refusing to give up their public space, stretching out their legs, hanging their hand bags over the backs of chairs, their dogs' firm bodies almost on vigil, the women sit with worried faces, a hand worries short hair, their faces strained, words of hate above their heads, but not giving an inch of that narrow street. This legacy, this gift of resistance I give to you.
Posted by Joan Nestle at 1:25 AM