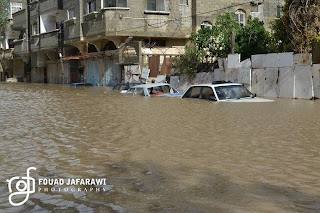 Sherry Gorelick, an old New York friend and tireless worker for justice in the Middle East, for an end to the suffering of the Palestinian people imprisoned by the merciless politics of Israel, sent me this report from Gaza.

"44 days without electricity! New emergency schedule started yesterday, electricity hours r downsized to 3 instead of 6, per day! Leaving Palestinians in Gaza with a 21+ hours of power outage a day. Add to this the horrible weather, constant rain, floods, wind, thunder and lightening!" Omar Ghraieb writing from Gaza 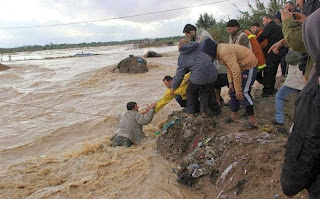 The blockade has taken its toll on every aspect of daily life in Gaza and now a natural calamity, a storm, the likes of which had before been seen in this part of the world , from which there is no place to run for these imprisoned people, the sea on one side and Israel and Egypt turning their hearts away on the other, destroys all comfort. How is this not genocide, asks Sherry. The deliberate making of life impossible.

"It is cold, there is no power and I am charging my computer using a car battery in order to get this message out. It is so cold in Gaza that every one has cold feet and a cold nose. A new storm is hitting this besieged enclave. There is no electricity and shortages of water, fuel, and vital services mean people just sit and wait for the unknown." Omar writes of no garbage collection for weeks, no way to flush toilets, rats being flooded into people's homes, sickness every where. "It makes me wonder if U.S. Secretary  of State Joan Kerry is aware of Gaza's situation. Would he find it acceptable if Israeli citizens lived in the same condition? Or don't we in Gaza count as human?" As a Jew, whose history lies in the ghettos of Poland and Russia, I call out for the Diaspora to look into its soul--to stand by and watch the suffering of another people, while the "Jewish Nation" turns its back, makes life less possible--what has happened to us in the name of our safety?

"Gaza is drowning today. Houses are flooded by water. People are freezing there. No power. No water. No heat. No fuel. THIS IS A CATASTROPHE. A CATASTROPHE. I need to do something to help. I felt so helpless that I wanted to call 911, Red Cross or Amnesty International. Anyone! I want to tell the world that Gaza is living an unspeakable disaster and in need for your help. I cannot be silent. You cannot be silent! 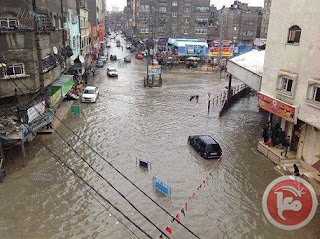 Dec 12, 2013, the IMEU:
"Unlike Manhattanites, though--or, more to the point, unlike their neighbors in Sderot--Gaza'a refugees have nowhere to flee when heavy rains, flood their 25-mile occupied territory, blockaded by land, air and sea."

Once it was Jewish lives that were unmournable, so many did not care, did not value our lives and now, we have allowed in our name, and some even support, the entrapment, the forced affliction of another people. No nationhood is worth this ugliness of the human heart.

I know that the peace activists, the women of Women in Black  and so many others in Israel will mobilize to help if the State allows it--and we must too.