"A Decent and Free Life:" Gay Courage in the Streets of Tbilisi 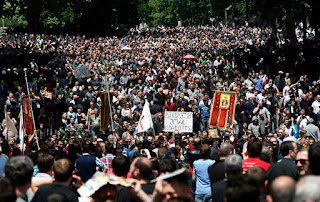 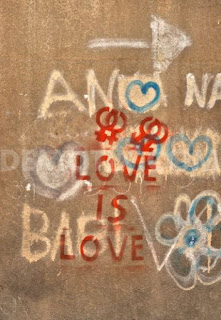 I realize how abrupt this all is. I wanted so quickly to share with you all that I was hearing from the blood- marked streets of Tbilisi that I rushed to give you the letter from dear Zoe, whom we met during our visit in Belgrade, and from Mariam who marched in Tbilisi's streets. The same sex graffitti is from a wall on Rustaveli  Street in that capital city and the thousands massing above are the outraged at such love. Violence against LGTB women and men is not reserved for the streets of Georgia; in New York, a gay man was killed by a shot in the face and others had been beaten in the past week.

dear friends
I am so in admiration of the courage of my friends in Georgia,
for trying to organize Gay Pride in Tbilisi.
I am so so sad to see the same experience as happened in Serbia in 2001,
where lgbt people are put on the table of the church and the government to  be eaten, to be killed, and to not have protection for our own lives.
So sad.
You can read more about what happened from this article http://www.georgianews.ge/society/23397-thousands-protest-in-georgia-over-gay-rights-rally--bbc.html
and here you can read Mariam Gagosh's experience, a great activist and brave woman.
i just have words of support and hope that we all will continue to fight for a decent and free life.
Your friend, Zoe

My experience on 17 May, IDAHO day, in Tbilisi

by Mariam Gagosh (Notes) on Sunday, May 19, 2013 at 8:59pm
On 17 May, IDAHO day, I was together with 20 other activists (18 women and 2 men) when counter-protesters attacked us. We were surrounded by police, who were in turn surrounded by a large number of counter-protesters. Even though their number and the aggression from them was growing (swearing at us and spitting in our faces), the police were repeatedly telling us to leave and not to escalate the situation. We obviously did not want to leave, because the aggressive crowd would attack us. Needless to say, we did not engage in verbal contact with the aggressors. We stood still. Some of us were demanding that the police takes special measures to protect us and we were requesting some transport. However, they were reluctant to provide so. We were trying to get hold of three contact persons provided by Ministry of Internal Affairs, but without success.

We spent some time in the shelter, where UN representatives were urging policemen to take measures. I believe that thanks to their efforts the police took steps and provided on yellow minibus for our evacuation. They made a corridor and we were evacuated from the building. Two policemen accompanied us into the minibus while the aggressive crowd tried to reach us and continued throwing stones, spitting and swearing.

The crows was preventing the minibus from moving. The counter-protesters attacked us from outside, threw stones, broke windows, bit us, grabbed our hair and bodies, three bottles, tried to drag us out of the windows, spitting and shouting all the time. The minibus was moving very slowly because of the crowd, but also because its front windows were damaged, preventing visibility. They also tried to get into the minibus and continuously tried to drag the driver out. The two policemen really did a good job in enduring that the minibus did not stop. I am grateful to both of them as well as the driver.

We were taken outside Tbilisi to a safe place. Members of our group were safely delivered to their homes (or nearby streets) by police patrol cars.

As a result of this attack, one activist was injured in her head, cut and bleeding, two activists had concussions, others have minor injuries, bruises, cuts, clothes torn. Needless to say, everybody is shocked and psychologically devastated.

With full responsibility, I can say that the crowd gathered against us was more then ready to tear us apart and kill us. It was a matter of luck that we survived. If we stayed a minute longer in the minibus, I am sure we would have been stabbed to death. 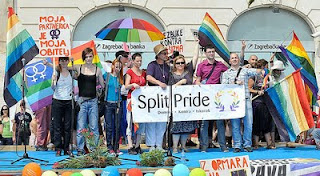 Courage in the Region