Julia and Mario: History with all Its Contradictions and Connections 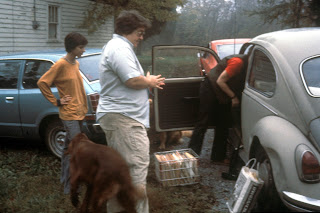 Julia Penelope Stanley and Sahli Cavallo, with Deb and her beloved car, Pigpen, c.1977 transporting the early archives back to New York from Nashville, Tennessee where Julia and Sahli were living

In the midst of my journey with the papers of Pinchus Goldhar, came two renewed historical moments in my life. They both came to me through that unique and perhaps now fading messenger service, Facebook. The first, prefaced by a familiar but not immediately placed photo, asked me if I was the Joan Nestle of the old days and told me there had been big changes is his life. Then I knew. Mario Costa who was the author of the message was an old lover of mine when he lived as MaryAnn Costa. The photo of the round faced, mustachioed man came to life and I saw my old friend in his new but perhaps also old self. The next day brought me another message of change, a sad one. On the Lesbian Herstory Archives page, I read of the death of an old comrade in the creation of LHA, Julia Penelope Stanley. It was the ensuing discussion in those short bits of feeling and thought that prompted this reflection on the frailties of our certainties and how hopeful this can be, reflections on what I always wanted LHA to be and as an after thought, how I would like to be remembered by my queer-lesbian world. Not with encomiums that I was good for all lesbians, as some said of Julia's work, for this would not be true. Just as Julia's work caused pain to some, closed doors on creative thinking on sexuality and gender differences just as she opened doors on language so would mine be a mixed legacy. Let me, I would say us, remain the problematic figures our times and desires made of us. This is the true richness of archival habitation.

In the aforementioned exchange of memories of Julia there was one that prompted this response. Elliot writing about that last point of contact between Julia and myself, a telephone exchange at the new archives in Brooklyn when I happened to be staffing, spoke of being present when Julia called LHA, he spoke of the rift between us and Julia's disenchantment with the larger lesbian community at that point. It was his word, healing, that brought to mind again, that call, and the feelings that flooded me when I heard Julia's voice that afternoon.

First,  I had known Julia a little before the first Gay Academic Union Conference in 1973, a large woman with a definite manner who I knew as Penny-- perhaps we had over lapped at some stoned gathering in the late 60s--a butch woman with a boyish face, wearing khakis and moccasins, who spoke with a definite twang and loved nothing more then her new automatic typewriter that moved its little globe of letters across the pages in breath taking speed. Julia never stopped writing it seemed. Out of that conference came the CR group that was to give LHA life.

I think I can see clearly the meeting in 13A, (think is all I can offer, now at 72 and this is why other recollections are so important)  Julia sitting on a chair and I below her on the shag rug, Deborah Edel and Naomi and other women sitting in the circle, talking about the loss of lesbian cultural products that even then in the early 70s we were seeing all around us. We were a mixed lot, historically, and this was good for the beginnings of the archives. My thinking about the goals of the archives was influenced by my reading of de-colonizing literature while Julia's was taking wing from cultural feminist thinking. You can find Julia's voice in the LHA's first newsletter statement of principles, her language of the indictment of patriarchy for the silences surrounding lesbian lives while I would have added, vice squads, Puritan women's movements and other anti-sex forces of the State. Deborah Edel will have to tell you more about this because the summer of 1973 when LHA'S position papers were written I was not sitting around the table but off traveling across the country with a new lover, Valerie, in a rickety old car she had just learned to drive.

The image that introduces this journal highlights another principle of the archives that did not make it into the newsletter. We decided that LHA had to outlast our own personal dramas, the blows that brought so many other lesbian feminist projects of those times to an early end and it was agreed that relationship problems could not hold the archives hostage. In the year pictured above, the archives existed in four plastic boxes, the collection that now fills four floors in Brooklyn started in those boxes which Julia and Sahli took with them to Nashville when Sahli started graduate school there. It soon became clear that things were not working out as they had hoped; the boxes had to come back to New York and so Pigpen, the archives best friend in those days, went into action. The rest is a kind of history. Mary Daly plays a part, one summer week Deb and I spent in Provincetown and visited with Julia, but that is another story. As Julia and I did our cultural work, our separation grew wider and wider. We wrote of different histories and in the process, I hope, helped to create a fuller one. I grew tired of Julia's separatist rants while she took a paycheck from a State University while I am sure she was dismayed by my sexual writings. Many years of separation with a silence between us.

The phone rang on that afternoon in Brooklyn in the mid 1990s, and I picked it up, getting ready to give out the directions of how to get to the archives, when I realized it was Julia on the other end. She sounded tired, worried, not sure how to go forward, a different Julia then I had ever heard. I thought of her as a bully so encased in her certainties, but here was a different woman. She was in a quandary, wanting nothing more to do with the lesbian community and here I do not have a clear memory of what specifically had happened, but what she wanted to talk to me about when she discovered it was I who had answered the phone, was what to do with her papers, she wanted to clean them out but she also needed money and the university had offered her some--again this is all from my memory--I told her how important she was to the lesbian community, she sounded so betrayed, that she should think carefully about what she wanted to do, and as a working class woman, I knew the pressure of needing money. She must do with her papers what suited her best but she should always know how important she was to the history of lesbian feminism in America. I said these words because I was sitting in a building filled with the complex stories of all our positions in the Sex Wars and beyond, and this fullness of differences let me let go of my own dedicated certitudes. Julia was in pain, and all I wanted to do was lessen it. Our conversation was healing, in Elliot's words, for both of us. Contrary to what was said in the Facebook discussion, Julia never gave her papers to LHA and I assume they are in the University of Nebraska Archives. We do have her early writings when she was sitting before that magic machine churning out her manifestos.

As I have said, I received another message on that day, from Mario Costa whom I have written about in "Doesn't She Ever Stop Talking," telling me of his new life. One of the most fervently held positions of what I call now "reactionary feminists," shared by Julia, was and is their refusal to accept trans people into the human liberated family. I await to hear from Mario about his journey, from the Italian working class butch woman who took me to the Bronx to meet her Mom to Mario, the person he is now--but all together I have known this person almost the longest of my time on this earth--Mario knew the first woman I loved, Carol, and that is going back to the early 60s. In my ongoing fem lesbian life I have been privileged to work with many transgendered people--Rusty and Chelsea, who spent hot summer afternoons in the archives basement sorting newspapers, Clare and Riki with whom I edited "GenderQueer: Voices from beyond the Sexual Binary," with now men who as women worked at the archives; through the years of my queer life from the bar days to now, I have walked these shifting sands of gender and sexuality. I thrive in this terrain. I always wanted LHA to be a place where the past was cared for while the future was listened for, where no nomenclature, even the word Lesbian, was assumed to always have one meaning. The archives I l believed must never be a cloistered place of assumed positionings, but always ready to welcome both in person and in documents the changing lives of queer, women, lesbians, biwomen, trans people, intersexed people and all other kinds of selves that the future may hold, all those who want to be included in a place called the Lesbian Herstory Archives where the word Lesbian stands for the largest of its possible meanings. I have journeyed with Julia Penelope Stanley working feverishly for the kind of world she wanted and I have made love with MaryAnn who is now Mario. How rich my life has been.