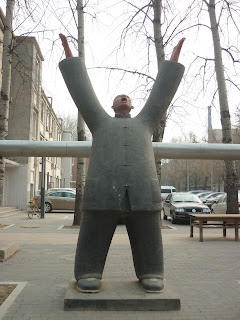 In an deserted factory area, the Beijing authorities have given over the empty spaces to artists and galleries of all kinds, from small rooms of hand made cloths to SOHO looking galleries for the work of modern Chinese artists and for traveling art shows from the West--so there on a gray morning, Di and I wandered, along with many young Beijingers, taking in one of Cindy Sherman's self portraits--from the smoky East Village 1960s apartment scenes to a spot on a wall in District 789. A few kilometers away is the studio of Wei Wei who suffers for the independence of his work, for the questions his art throws up in the face of so much control, in the face of so much fear of unwatched, unsupervised expression. We found moments of this resistant voice here in the streets of Destrict 789--as much in the street sculpture as in the young people themselves, arms around each other, flirting with the images and their own youth. I say all of this and you know, of course, that I am only a granny looking for a second at a very complex cultural moment in this country of vast geographies, histories, plans. 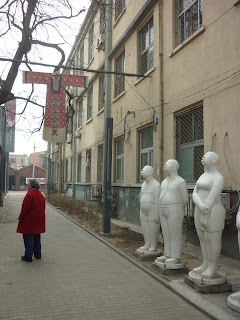 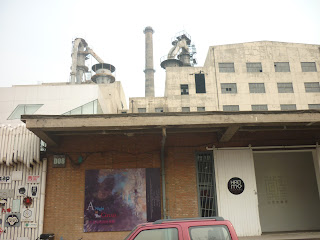 Here over one of the galleries looms the remains of other abandoned factories, their twisted roofscapes like sculptures too, the broken windows, the emptiness of collapsed industrial spaces but on the streets in the Destrict a new life has taken hold--a mix of tourism, young love outings, artists keeping track of each other and the world. 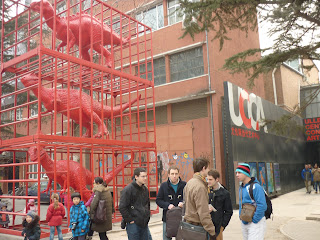 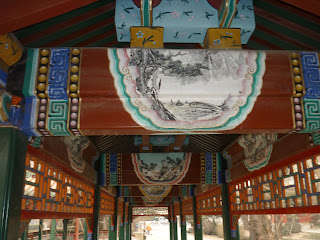 The roof of the long pavilion of the Summer Palace, hundreds of years old and still vibrant. 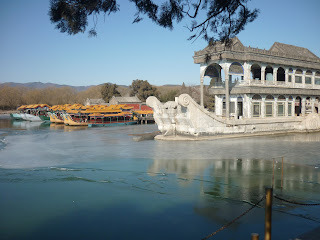 The marble boat that never moves from its moorings on the lake of the Summer Palace. Deena tells us stories of the layering of society that went on along the walks and outdoor galleries of this now people's place, shows where the concubines would come out and stand evenly paced in their costumes for the night, as the Emperor and his entourage made their way past, waiting for his choice to be made. "Sometime they would sing," Deena said and it seemed we could hear their voices in the cold sun. Often for me on this journey, the curtain between the past and the present wore very thin but perhaps this is because of how aging is traveling in me and I in it, where times are just doors or curtains that a gust of wind can blow open and like the roofs of the unending galleries, revelations lead to revelations. An event is the gust of wind: a perfume or a tilt of the head or the headline of the day's paper. 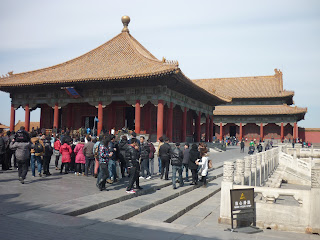 Inside the Forbidden City, with throngs of visitors from all over China, a place that defies my camera skills, so huge, so continuous, each House with its courtyard large enough for hundreds of horsemen, so this is but a token moment of an uncapturable vista of a national historical vision, made mundane by its availability now. 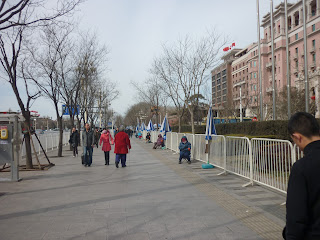 If you look closely, you will see small figures of women sitting on stools, evenly paced. They are the volunteer watchers, who sit all day with their thermos of tea beside them, enduring the cold winds, red armbands with white lettering announcing their civic zeal. Here we are right across from Tianamen Square and the People's Hall where the largest gathering of Chinese government and regional delegates was taking place. But even at the entrance to our hutong, a similar woman was doing her job of watching. What they are looking for we could only imagine, and what were we really seeing, these rustlers as the English translation of the job reads, we do not know but surveillance and tea and cold were with us all our time in Beijing as well as the warmth and openness of so many Beijingers. 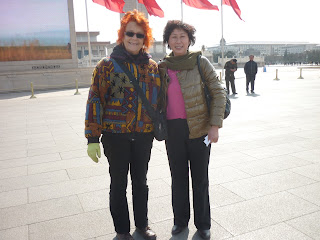 We are standing in the Square looking around, Mao's tomb at one end, soldiers standing erect and constant at the monument at the other end of the Square where many so many took on the tanks of their own government, like so many American students have been doing through the 20th century, not tanks but rifles and batons, dogs and water canons, and as has happened before in our public life in Beijing,  people excited by our presence rush into the picture. Asking if it would be alright with head nods and hand movements, we all express our pleasure at entering each other's frames. Now we travel with an image of this woman and she travels with an image of La Professoressa, beyond the watchers of both governments.
Posted by Joan Nestle at 11:16 PM