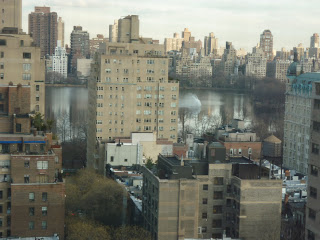 the view from Dawn's and Linda's apt on 90th street, NYC 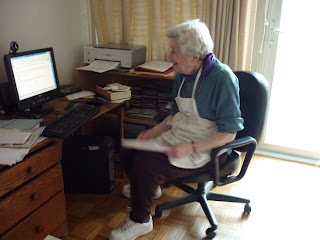 Naomi working on ms
The rain has stopped and the East Side Central Park skyline is filling the 21st story bedroom window of Dawn and Linda's apartment. The glass sheen of the Reservoir Lake lays between the other high risers, a new view of my old city for me. My old apartment on the 13th floor looked out on Broadway, and if I leaned out of my window, like Molly Goldberg, I could follow the endless flow of taxis, buses and just plain folk up this worn avenue. Now New York is city scape to me, to join the others I have come to know: Melbourne, of course, with its still becoming city sky curve, new glass buildings rising everywhere, with the Yarra River in their midst and the 19th century Flinder's Street Station anchoring the city center in its near past. Oldness finds its safe homes in blue stone alley ways, in wood frame one floor houses dating from the turn of the century, oldness hoping the youthful eyes of a new time will overlook it in its pursuit of higher up. From the balcony of our flat in London, we watch the endless flow of students up and down Tavistock Place, their wheeled suitcases when I am not looking sounding like the hoofs of prancing steeds on the cobblestones. Old has not gone into hiding in London, but near the Tate Modern luxury high risers are claiming the new time and the banks of the Thames beckons young professionals to claim their own spot of glass and river. Touch the old stones wherever you find them, touch the histories they carry, and leave them be, overlooked and enduring.

I have been away from New York for over two years, the longest time since I started my life with La Professoressa, and I will spend this time here sitting with old friends and just looking and talking, sometimes with the sites of New York in the background but they are not the feature. What I am visiting are the faceliness of those whom distance has kept from me, the faces of old friends who are old, some young old and others, whom time has not yet shaped. Naomi, in her 90s, welcomes me to her door. She is a gleam of spirit. I have interrupted her at breakfast, she sits in her chair, slightly at a slant, the New York Times propped up on a table easel. We talk about her collected works soon to be published, we laugh at the audacious spirit of the women of OWN (Older Women's Network) that she and her partner, Eva, founded a decade ago, rebels all with bones that hurt and bodies that fall. No denials just egging each other on to keep snatching the sting of that good martini or essence of that poem or flight of the just seen bird before it disappears in thicker stuff. Naomi, laughter in her eyes, mischievousness living in her narrowed house, her body, her house. Each year we pledge to stay alive until we can make it together down Broadway for our ritual hamburger, the good joints, without pretension, getting harder and harder to find. We did it, Naomi, we did it.

And then last night, dinner with Deborah and breathing deep sighs of relief at how well she looks, how precious these facelines are, these scapes of friendships and loveships, how one rushes in to say to time, please be careful with this one, touch it yes, let your calligraphy run deep but let me see again and again the precious visage gleaming with the touch of life.
Posted by Joan Nestle at 12:52 PM