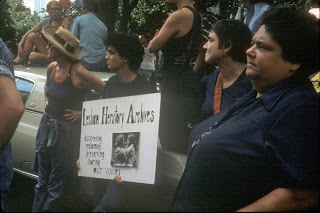 Joan, Adrienne, Marg, c. 1976
So long age, this image, from the mid 70s when we were in Washington, once again, to protest this time, America's intervention in Central America. And there with her head turned, is Adrienne Rich standing next to an old friend from The Gay Women's Alternative, Marge Barton. Deb must have taken this image; it is one of the first times we marched under the name of the Lesbian Herstory Archives in a non lesbian, non gay, demonstration. We were friends then, Adrienne and Michelle being very early  supporters of LHA, neighbors on the Upper West Side.

It is a warm late night here on Fitzgibbon Avenue, so far from that Broadway, so far from those early years of the lesbian-feminist movement and the gay liberation movement, not always the same thing, far away and yet I can see some of it so clearly. I remember the times Adrienne, already a famous poet, came back to the old WomenBooks to read, the word of her presence spilling out into Upper West Side streets, where we all were still renters and community dreams were possiblele. Deb and I trying to find a parking place that night and seeing an endless line of women mostly stretching down West End Avenue, trying to get one more inch of space to hear the poet read. Michelle and Adrienne, Audre, Blanch and Clare, at parties with all kinds of flirting going on, all kinds of thinking going on, books in the planning, books happening. We disagreed on things, Adrienne and I, but she listened and was always gracious with her letters of support. I feared her a little. Our lives had been so different and then in the 70s and 80s we were in shared territory. I am not saying what I mean; identity politics is not a problem- free thing, the demand communities make for experiential purity  can enforce silences. What I feel most now is love for this community of women, poets and writers and thinkers who "overstepped their bounds," in the most magnificent of ways. Adrienne always having to answer the charge that her poetry suffered because she was too polemical while she and Audre gave life to so many, gave life to their art in an America that officially did not know what to do with their visions, but oh, how they filled our hearts and gave strength to our refusals and hope to our dreams of change.

I see the small dark woman carrying her shopping on Broadway,  walking never easy, I see Michelle and Adrienne having dinner at 215, bringing a signed print for this new thing called the Lesbian Herstory Archives, I see Adrienne taking notes, working in the small room of the young LHA, at the lesbian made table, gathering material for her book, "Of  Women Born," and I quietly  bringing her cups of tea, I hear Adrienne's voice, over the phone, asking me if she should speak at the Take Back the Night Rally at Times Square, knowing I would say no and feeling almost breathless that she had called to ask. Arguments about sex and power divided us, I think I can say, and for many years we had not spoken, and then when I wrote a piece, "Thinking in a Time of War," for the Journal of Women's History in their 2003 edition dedicated to Rich's essay hugely influential "Compulsive Heterosexuality and Lesbian Existence (1980) about my mixed feelings about the essay, I asked the editors to send a copy to Adrienne because I had used personal moments and wanted to make sure I had not done wrong. Once again, she was gracious in her response. Those were the last words exchanged between us. This poet whom we need now more then ever will live and live and live.

"Before I end, I want to say one more thing. Over the years, I have read savage reviews of Rich's poetry, reviews attacking her for being too polemical. Adrienne Rich has put her whole literary reputation in danger because she has ideas about injustices of all kinds and they inform her creative work. For the risks she has taken in this country of so-called free speech, where the disdain of the establishment, literary and otherwise, can crush a writer's spirit, I will always honor her."

It is the time of our lives I mourn for, when in full voice and wanting body, we tryed to change what the word "women" meant, with fierceness and tenderness we covered miles of possibilities together.

A young girl's poem from the time of the Tang dynasty:

"In the pavilion of separation. the leaves suddenly blew away.
On the road to farewell, the clouds lifted all of a sudden.
Ah! How I regret that [women] are not like the wild geese
Who go on their way together."
Posted by Joan Nestle at 6:17 AM