"I Lift My Eyes to the Hill': The Life of Mabel Hampton" Part 2 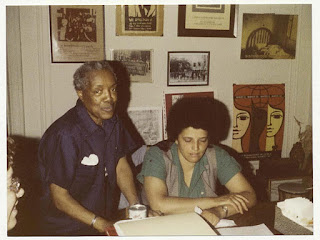 Mabel Hampton and Paula Grant, in #13A, old home of LHA, NYC, 1981.Paula wrote on October 30, 2011: "Mabel used to sometimes call me 'The Vest'. [Arisa Reed was 'Yellow Pants."]  I also remembered carrying her out of the church on her body's final journey and how the funeral director had told his employees to step back because "the women will take her." Every time I use the Whitestone Bridge, I say 'hello." I have JEB"S photo that used to be in #13A hanging i my house and every time I use the Whitestone Bridge, I say 'hello' from all of us."
"I'm Mabel Hampton. I was born on May the second 1902, in Winston-Salem, North Carolina, and I left there when I was eight years old. Grandma said I was so small that my head was as big as a silver dollar. She said that she did all she could to make me grow. One day she was making the bed and gettin' things together after she fed the chickens. She never let me lay in bed; I lay in the rocking chair, and this day she put the clothes in the chair; when she carried 'em outside, she forgot I was in 'em and shook the clothes out and shook me out in the garden out on the ground. And Grandma was so upset that she hurt me.
My grandmother took care of me. My mother died two months after I was born. She was poisoned, which left me with just my grandma, mother's youngest sister, and myself. We had a house and lived on a street--we had chickens, had hogs, garden vegetables, grapes and things. We had a backyard, I can see it right now, that backyard. It had red roses, white roses, roses that went upside the house. We never had to go to the store for anything. On Saturdays we go out hunting blackberries, strawberries and peaches. My girlfriends lived on each side of the street: Anna Lou Thomas, Hattie Harris, Lucille Crump. Oh-OOH-O Anna Lou Thomas, she was a good lookin', she was a good lookin' girl.

One day Grandma says, 'Mabel, I'm goin' to take you away.' She left Sister there and we went to Lynchburg, Virginia, because Grandma's mother had died. I remember when I got there, the man picked me up off the floor and I looked down on this woman who had drifts of gray hair. She was kind of a brown-skinned woman and she was good lookin'. Beautiful gray hair she had. I looked at her and then he put me down on a stool and I set there. They sang and prayed and carried on. I went to sleep.'" 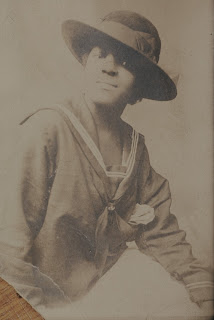 Ms. Hampton, c. 1918
However pleasant Ms. Hampton's memories were of North Carolina, she had no intention of returning there later in life. "Lillian tried her best to get me to go to Winston-Salem.I says, 'No, I don't want to.' She says, 'You wouldn't even go to my home?' I says, 'No, because with my nasty temper they'd lynch me in five minutes. Because they would see me walkin' down the street holdin' hands with some woman, they want to put me in jail. Now I can hold hands with some woman all over New York, all over the Bronx and everywhere else and no one says nothing to me.'" 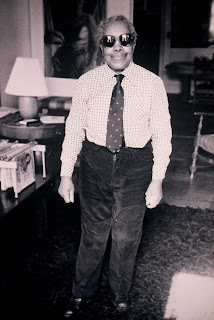 Ms. Hampton, at LHA, 1982
When she was seven years old, in 1909, Ms. Hampton was forced to migrate to New York. In her own telling there is a momentous sense that she had lost whatever safety she had in that garden of roses.

"One morning I was in the bedroom getting ready for school [a deep sigh]. I heard Grandma go out in the yard and come back and then I heard a big bump on the floor. So I ran to the door and I looked and Grandma was laying stretched out on the floor. I hollered and hollered and they all came running and picked her up and put her on the bed. She had had a stroke. My mama's younger aunt, I'll never forget it, was combing my hair and I looked over at Grandma layin' in bed. It was in the morning. The sun was up and everything. She looked at me and I looked at her. And when my aunt got finished combing my hair, Grandma had gone away.

"They called my mother's sister in New York and she came so fast I think she was there the next day. I remember the day we left Winston-Salem. It was the summertime. We went by train and I had a sandwich of liver between two pieces of bread. And I knew and felt then that things was going to be different. After eating that sandwich I cried all the way to New York. My aunt tried to pacify me but it didn't do no good, seems as if my heart was broken. 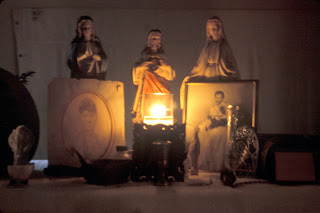 Ms. Hampton's dear ones including her wife of forty years, Lillian Foster, c. 1979
Taken to a small apartment at 52 West Eight Street, Ms. Hampton meets her uncle, a minister, who, within the year, will rape her.

In telling her story, Ms. Hampton has given two reasons for her running away at age 8 from this home: one involves a fight with a white girl a school and the other, a terrible beating by her uncle after she had misspelled a word. Whatever the exact reason, it was clear that Ms. Hampton had already decided she needed another air to breathe.

"My aunt went out one day and he raped me. I said to myself, 'I've got to leave here.' He wouldn't let me sleep in the bed. They had a place where they put coal at, and he put a blanket down and made me lay there. so this day, I got tired of that. I went out with nothing on but a dress, a jumper dress, and I walked and walked."

Here begins an amazing tale of an eight-year-old girl's odyssey to find a place and a way to live. After walking the streets for hours, the young Ms. Hampton "comes to a thing in the ground, in the sidewalk, people was going down there." A woman comes by and thinks she recognizes the lost child. "Aren't you Miss Brown's little girl?" Before Ms. Hampton can answer, she places a nickel in her hand and tells her to back home to Harlem. As Ms. Hampton says, "that nickel was a turning point in my life."

Instead of going uptown, Ms. Hampton boarded a Jersey-bound train and rode to the last stop. She came above ground and walked until she found a playground. "I seen all these children playin', white and black, all of them havin' a good time." She joins the children and plays until it begins to get dark. Two of the children take an interest in her and she makes up a story: "My aunt told me to stay here until she comes." The girl calls to her brother, "You go get the cops, I'll try to find her aunt." She brings a woman back with her--a Miss Bessie White--who begins to ask her questions. Ms. Hampton: "I looked down the street and from the distance I see the boy comin' with a cop so I decided to go with the woman. Bessie said, "Come, I'll take you home." 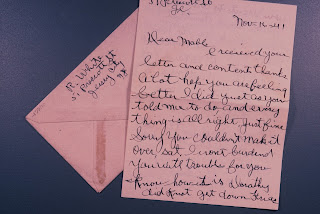 Ms. Hampton will remain with the White family until she is seventeen years old. One member of the family, Ellen, particularly, stays in her memory: "I seen a young woman sitting left of where I come in at. I say to myself, this is a good-lookin' woman: I was always admiring some woman. Oh, and she was. She had beautiful hair and she  looked just like an angel. She got up out of the chair, she was kind of tall, and she says, 'you come with me.' So she took me upstairs, bathed me, and said, 'we'll find you some clothes.' she always talked very softly. and she says, 'you'll sleep with me.' I was glad of that.

"So I went and stayed with them, The other sister went on about lookin' for my aunt. I knew she never find her. See, I knew everything about me, but I kept quiet. I kept quiet for twenty years."

Mabel Hampton, from the very beginning of her narrative, speaks with a determination of a woman who must take care of herself. She will decide what silences to keep and what stories to tell, creating for herself a power over life's circumstances that her material resources seldom gave her. 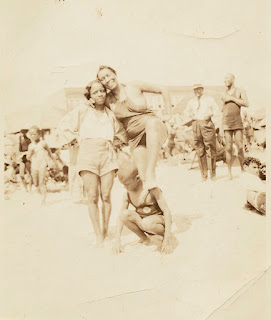 Ms. Hampton with Ellen White, c. 1912
For Mabel Hampton, the 1920s were both a decade of freedom and one of literal imprisonment. In 1919, when she is seventeen years old, she is doing housework for a Dr. Kraus of Jersey City. Her beloved Ellen, sthe first woman friend to hold Ms. Hampton in her arms, has died during childbirth. With Ellen gone, Ms. Hampton's ties to the White family are loosening. She will find work dancing in an all-woman's company that performs in Coney Island and have her first requited lesbian love affair. 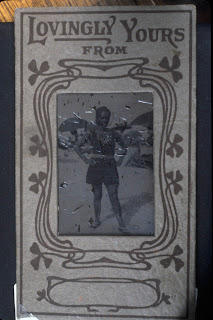 She will discover the club life of New York. This is the decade in which Ms. Hampton will pay a visit to the salon of A'Leila Walker, the flapper daughter of Madam Walker, and be amazed at the multiple sexual couplings she observes. 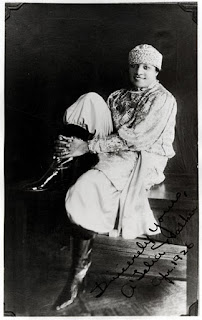 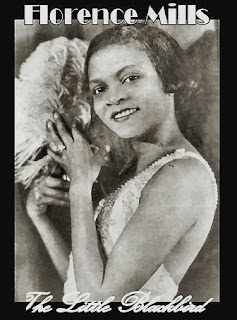 She will perform in the Layfayette Theater and dance at the Garden of Joy, both in Harlem. In this decade, she will make the acquaintance of Ethel Waters, Gladys Bentley and Alberta Hunter. She will be one of the 150,000 mourners who sing "My Buddy" as the casket bearing Florence Mills, beloved singer, slowly moved through the Harlem streets in 1927. This is Ms. Hampton's experience of the period that lives in history books as the Harlem Renaissance. 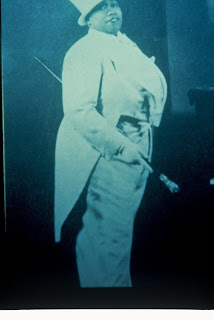 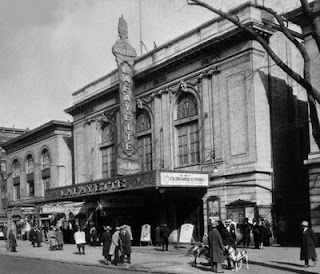 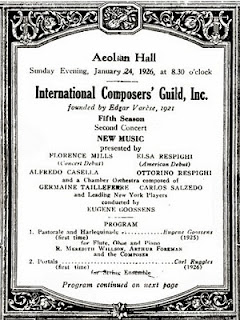 Program for performance by Florence Mills, NYC, 1921
Posted by Joan Nestle at 6:06 PM